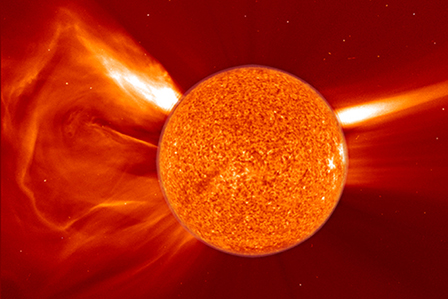 Time lapse of a solar coronal mass ejection in 2011

Yunnan astronomers may soon be helping to unlock the secrets of the sun, aided by a colossal eight meter solar telescope. Using this device, Chinese astrophysicists hope to further scientific understanding of how stars work by first examining the one closest to home.

The 28th meeting of the International Astronomical Union wrapped up this week in Beijing and Chinese astronomers made waves there by unveiling plans to build a 570 million yuan (US$90 million) solar telescope. The proposed instrument will be three times larger than any existing solar telescope, Hexun is reporting.

The ground-based Chinese Giant Solar Telescope (CGST) will dwarf its largest cousins, which are currently under construction in Germany and the United States. Those two solar instruments have 1.5 meter optical lenses.

Once built, the CGST will allow scientists to more closely examine the magnetic fields generated by the sun. Astronomers will also monitor the changing geography of the sun and study solar weather patterns and how they impact Earth.

Solar activity, especially solar flares and coronal mass ejections, can affect GPS satellites, radio transmissions, electrical grids and even weather patterns on Earth. Liu Zhong, a research scientist at the Yunnan Astronomical Observatory told Hexun "with more accurate forecasting of solar activity, we will be able to do something about prevention, and minimize losses [from destructive solar events]."

Liu also explained that understanding the sun more comprehensively would lead to greater understanding of how stars outside the solar system behave.

While a site has yet to be selected for the CGST, Yunnan is considered the frontrunner due to its elevation and pristine skies. The province is also already home to southwest China's largest array of scientific telescopes, including the world's fourteenth largest optical telescope in Lijiang.

Is Lijiang's 2.4 m telescope really currently the world's 14th largest optical telescope? I don't think so, there are quite a few now with effective aperture size of greater than 3 m: en.wikipedia.org/[...]