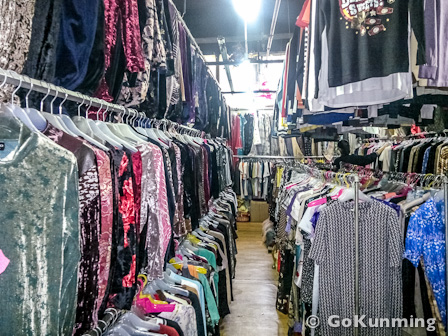 In Western countries secondhand clothing shops, flea markets and thrift stores are common places to find discounted clothes and search for retro-chic fashion. This is not often the case in China, where tradition dictates that wearing used clothing can bring misfortune and burning possessions of the recently deceased is still not uncommon.

However, stores like this do exist. GoKunming recently visited what is perhaps the Spring City's largest used clothing emporium. If you are looking for secondhand apparel, Kunming's Duo'er Hui Shangye Taobaocheng (多尔惠商业淘宝城) is the place to go.

The market is located on Puji Lu (普吉路) in the shadows of the elevated Erhuan Beilu. We arrived promptly at 10am and found...a ghost town. Only three of the hundred-odd shops were open for business. "Come back after lunch," advised a security guard. 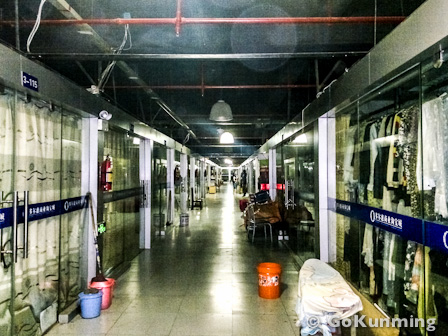 We got to the market a bit too early

We took a two-hour stroll around the nearby Zhangguanying Secondhand Market and duly returned after lunchtime.

The market moved to its current location two years ago from near Fengning xiaoqu (丰宁小区), and it looks like the majority of the building has been vacant since then.

A giant red banner adorns the front entryway and declares a supermarket grand opening on August 8. Contrary to the banner's optimism, the first and second floors are messes of demolished walls, stacks of masonry and piles of electrical wires. 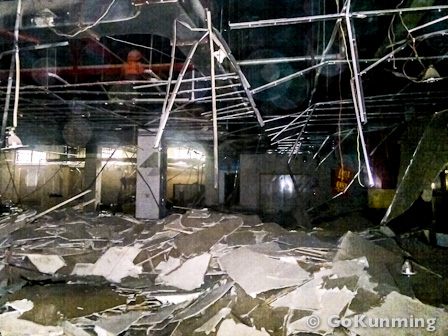 The first and second floors are not quite finished

Up two flights on the third floor, dozens of clothing shops had opened during our absence. Light spilled from shops and illuminated the otherwise dim corridors. Children played in the halls while shopkeepers lounged in chairs and watched TV outside of their stalls.

The market is a bit shabby and musty but is overflowing with all manner of clothing, shoes and luggage. On the floors of several stores lay huge piles of unsorted clothing, each piece priced at only two yuan. Other shops advertise that everything inside is 20 or 30 yuan.

Not all of the stores are random assortments of clothing. Some only sell women's garments, others just baby clothes. One neatly organized store is packed with racks of suits and looked more like a tailor's shop in Hong Kong than a stall at a discount mall. 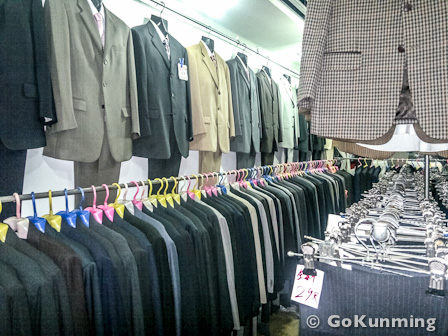 A shoe store in the corner of the market contains an endless variety of footwear, some of which hangs from the ceiling. It sells everything from thigh-high leather boots to monstrous size 50 gym shoes.

We asked the owner if anyone ever bought the large-sized shoes and he told us foreigners with big feet are some of his best customers. 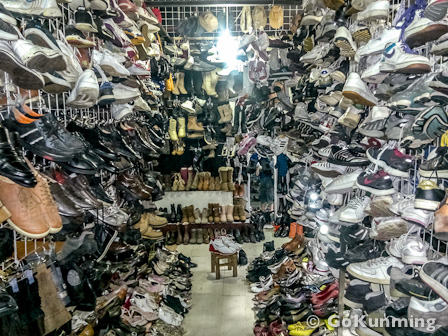 We walked past shops specializing in denim, jewelry and luggage. Several stores simply sold socks. After digging through a store with no visible floor, we stumbled across a secret stash of name-brand tents and sleeping bags.

A brightly lit bag shop prominently displayed knock-off purses from Gucci, Louis Vuitton and Chanel. The shop was doing brisk business while we were there. Jade and jewelry stalls also drew more customers than the ones selling only clothes. 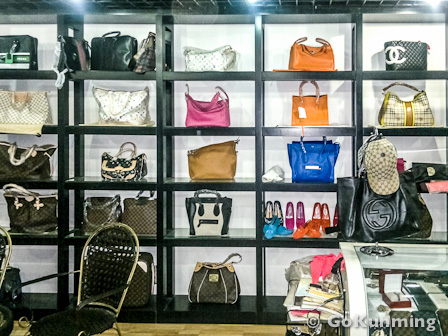 Where does all the merchandise come from? Our friendly security guard informed us much of the clothing is bought in Guangdong. Bundles of unsorted clothing are sold by the kilogram and then shipped to cities all over China.

A 2009 news report found a village with 10,000 residents in Guangdong was responsible for importing 100 million pieces of cast-off clothing from Japan, Korea, the United States and Hong Kong.

After some serious rummaging and some equally serious haggling, we exited the building to find a small open-air dining area had started making food. We ordered cold noodles (凉面) and shaguofan (砂锅饭) and ate outside under a clear blue sky. 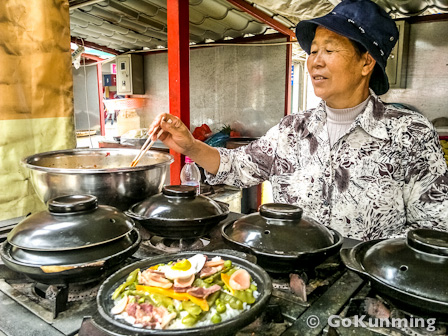 Shaguofan and other goodies are sold just outside the market

The Duo'er Hui Shangye Taobaocheng is open daily from 9am to 8pm, although GoKunming recommends going after lunch. We were told inventory is highest and the market is busiest during the winter months. The nearest bus stop is the Jiaotong Xuexiao stop (交通学校站) on Puji Lu. The stop is served by the 1, 8, 8 special line (专线) 53, 68, 151, 189, C3 C10, C68 and C69 bus routes. 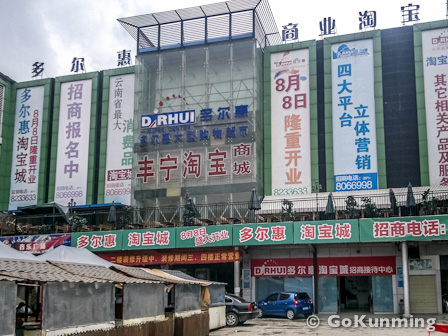 Good article, but where is the new clothing market in KM, along the lines of Beijing's Silk or Yashou markets, where you can buy 'branded' goods in western sizes?

@tbowers: Thank you for pointing that out. The url changed after a correction on the name. The link in the article has been fixed.

This place is great. I've bought a load of t-shirts there and they all have years of life left in them.

@Heinz: Check out these listings for men's and women's clothing in Western sizes:
gokunming.com/[...]
2 locations
gokunming.com/en/listings/item/hmg_33132/hm_golden_eagle
3 locations
Haven't found a clothing market yet, but GK will keep looking.