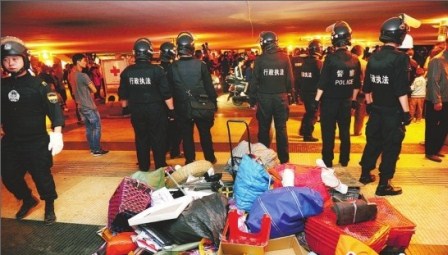 Unlicensed vendors are by now a common sight on most of the major shopping streets near Green Lake Park. Often pedestrian traffic is forced off the sidewalk and into the street by tanzhu (摊主) selling everything from phones to lingerie to puppies.

That may be changing. At 8:30pm last night 200 chengguan, aka urban management officers, and uniformed police moved into the Xiaoximen turtle back interchange (小西门龟背立交桥) and removed street vendors and confiscated all of their wares, Yunnan Net is reporting.

The roundup was the beginning of a "100-day crackdown on illegal street vendors in Kunming's Wuhua District," according to the report.

Police filled ten pick-up trucks with produce, animals and other impounded goods. Vendors were told they could pick up their non-perishable merchandise from chengguan offices after paying a fine and signing a sworn statement declaring they will no longer sell goods illegally on the street.

Confiscated food was taken to a nearby trash compactor and destroyed. Animals seized from vendors were sent to a local shelter.

Officers returned to Xiaoximen at 10pm and impounded another three truckloads of merchandise. Similar patrols were carried out on Nanping Jie (南屏街) and outside of Think UK (创意英国). Several barbecue stands were taken from street food sellers and crushed in garbage trucks.

Vendors offered little resistance largely because the chengguan had warned them previously that their goods would be seized. In the past, Kunming's chengguan have suffered from a serious public image problem due to fights with Kunming residents and charges of brutality.

There has been no announcement of what other areas will be targeted during future patrols. Similar nighttime markets have popped up around Kunming in the past few years. Perhaps the most notable is the Wenhua Xiang market that snarls traffic on a nightly basis and has been ongoing for almost two years.

They are sure taking away a lot of the charm of living in Chinese cities. Are all night-time noodle stands illegal? What do those people normally make their living off? Yet I agree that the street vending has become a bit mad and if they want traffic to one day flow smoothly in this city, then these things must be taken off the streets.

I hope the chengguan this time kept their manners.

The venders have gotten out of control. Blocking traffic, and the food sellers are a real health threat. Glad to see them gone. Hope they stay gone. I also hope the police handle this in a calm way.

Don't know why they don't:

1. Set up lots of small areas for them that are along high foot traffic areas.
2. License them - a small licensing fee issued with a clear set of guidelines including times, maximum size of selling area, foot/car traffic impediment clauses, sellers of food can be randomly tested (secret health official customers) etc.
3. Enforce it - but don't be so hardcore. Create a warning system for them - 2 strikes and on the third they are out.

Making the above changes you would think would solve the problem. Illegal vendors then get caught while allowing those that don't cause a public nuisance to continue selling. The shoe is then on the vendors feet - they need to make themselves "up to standard" to continue. But TIC!

This is utter filth. It is a disgrace that multi-nationals can dominate

on the rubbish dump. Snarling traffic is such a problem? Maybe the

Kunming's streets every day. These are real people with real kids and real

lives actually trying to make an honest living. Have a heart!!

Is the living they are trying to make as honest as the people who pay rent directly behind them who's business they steal and undercut?

These are illegal vendors who adhere to no rules of commerce, sanitation, traffic, politeness and fairness, they pay no taxes, rent, salary, electricity or any of the other fees that infrastructure require therefore they are only helping themselves and do not do any good to the community in fact quite the opposite they leech off of the hard work of others who came before them and make their living harder by selling similar products for cheaper directly in front of them in many cases. They are completely unregulated and can do what ever they want when the chengguan aren't around is that 'honest' or fair to the community?

While all of the legal businesses struggle to pay their ever increasing rent and every other increasingly expensive aspect of running an actual 'honest' business more and more street vendors appear every day and if there isn't some kind of enforcement on their growth I fear this problem will eventually engulf much of the city.

This illegal activity cannot go unchecked forever right? Otherwise who will work anymore? We can all just sell crap on the street from now on until we are old and call it an honest living right? Who will ever pay rent again if the illegal path is the less regulated and more profitable option? Where does it end? What if they start selling drugs or something? There are vendors that already sell strong lasers and stun guns in wen hua xiang, is that ok? They're already illegal and unregulated right? why not go all the way?

In my opinion the biggest tragedy in this situation is that the vendors who will lose the most from this campaign are probably the poorest. The people who actually are carrying babies and selling things like fruit and shao kao and who probably make much less money from running an illegal blanket shop will probably feel the crackdown the hardest and probably affect the businesses around them the least, they are the easiest to catch. Meanwhile the rich kids with their nice cars in wen hua xiang are still in full effect tonight, these kids actually have quite an adverse effect on many of the businesses that pay premium rent to be in wen hua xiang as well as the hundreds of families that live in wen hua xiang and are the least polite.

But don't mess with them because you might get beat up by them or their mafia-like friends. Guess they have some pretty amazing guanxi.

An highly intelligent and well argued statement! I am glad the poor have been defended. The poor always suffer when the profits of the rich are dented. The best solution is to have lots of well regulated markets.

Street vendors and cluttered chaos is part of the charm of China. To get rid of it and to make streets look like anywhere else in the world, is a shame. Also, some of these people have no other way to make money. None.

I agree with the statement about the people in new cars and shiny clothes racks and the whole thing on Wen Hua Xiang.

I've often been having a drink and watching, looking at my watch, and sure enough, they appear like clockwork about 10pm. The officials know this. But there is no enforcement against them from about 10pm on. It's a sham.
I've often wondered why the outdoor areas of Wen Hua Xiang can't have a few tables and chairs so people could sit outside like in most cities that encourage sidewalk cafes. Yet, every night, instead of a nice atmosphere, it turns into a bizarre jungle and interferes with all of the businesses.
Yeah, we see people scrambling with their goods, running down the street when the raids occur — but those people do not sell out of new cars. The people that sell from cars just throw their stuff in the car and close the door and wait for the raids to finish. It's pretty strange.
What will change? Will they allow outdoor seating and areas for real businesses on Wen Hua Xiang? Will it be turned into something like a nice walking and strolling street like it should be, like we find in most major cities of the world?
No, the vendors selling from fancy cars and those who set up clothes racks will continue to be ignored I am afraid.

I wish the Cheng Guan would go away and the street vendors were allowed to stay. If they hinder traffic, well, I wish 90% of the cars would go away, too.

"I've often wondered why the outdoor areas of Wen Hua Xiang can't have a few tables and chairs so people could sit outside like in most cities that encourage sidewalk cafes. "

Outdoor tables were abolished 5-6 years ago, after complaints from retired professors living upstairs. Too much drunken shouting late at night, it seems.

"When you are done, pack your shit and head back to the US of A ssholes....."

Pretty much what I think of the anti-vendor, everyone-must-have-a-license-to-breathe sorts.

"Is the living they are trying to make as honest as the people who pay rent ... ?"

Yes. There ought to be more small shi chang and night markets, not less.

there would be no illegal without the people who buy the ' bargains'.
but then i dont understand what motivates someone to want to buy a phone or a necklace straight off the street late at night.....

Saw a couple of Chengguan officers hassling some poor guy selling freshly made popcorn yesteday (with a sizeable queue waiting to buy it) whilst behind them 100+ middle-class teenagers were blocking up WenLingJie with their illegal back-of-the-car nonsense. Double standards?