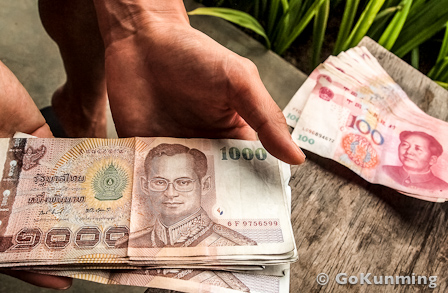 On a small beach in southern Thailand eleven years ago I heard the unmistakable sound of Mandarin Chinese coming from the bungalow next to mine. Back then, that was a rare occurrence.

My curiosity was piqued enough to knock on their door, practice my Chinese and find out what had brought them there. Even in Thailand's major tourist destinations I had never come across independent Chinese travelers.

Fast forward more than a decade to a restaurant on the main drag in Chiang Mai where I met two young Chinese tourists — Xiao Hua from Lijiang and Fay from Xiamen. I watched as their waiter first brought them two smoothies, then a salad, then two large steaks with eggs, and then a whole steamed fish. It was enough to feed at least four.

"We have no idea what we are ordering," Xiao Hua told me as the waiter brought out two more dishes and a big bowl of rice. He had to place the last two on stools as there was no space left on the table.

"I have an app on my phone that lets me take a photo of the menu and then it gets translated. But I have no way of really knowing what I ordered. We just kind of point to things and hope for the best," she told me. It was the girls' second trip to Thailand this year and only their second trip ever abroad.

Since China began opening up more than three decades ago, Chinese traveling outside of package tours have been a rarity. Most people from the mainland opted for group tours with set schedules for travel, dining and shopping, thus removing any uncertainties and language obstacles. 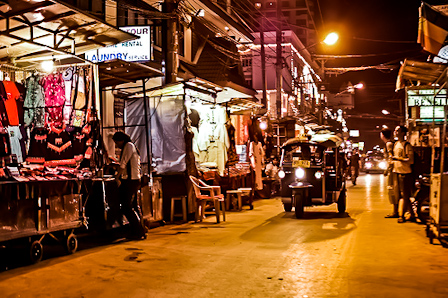 One of Chiang Mai's many night markets

Today though, far more Chinese have passports, money to spend, and perhaps most importantly, a genuine thirst for adventure. In 2012 you can't go anywhere in Asia without bumping into independent Chinese travelers.

Chiang Mai, called Qingmai (清迈) in Chinese, is less than a two-hour flight from Kunming. Until recently even the occasional Chinese tourist group was uncommon, but this year has been different.

"They've been coming in droves," one local café owner told me. "We've seen more Chinese tourists in Chiang Mai so far this year than we have over the past ten years combined."

Last year, the Tourism Authority of Thailand estimated that more than 1.5 million Chinese per year would visit the country by 2014. So far this year Chinese tourists have already surpassed that number and will easily surpass two million by year's end, making them the top foreign arrivals in the country.

For many in Thailand, Chinese tourism can be a double-edged sword. Some fear an influx of Chinese migrants to the country and worry that they will buy up properties and take jobs away from Thais. But business owners in Chiang Mai I talked with couldn't be happier with the trend.

"Our economy has been bad for several years now," one local antique vendor told me. "Europeans and North Americans aren't traveling as much as they used to. We're lucky the Chinese have been bringing so much money. They're great customers." 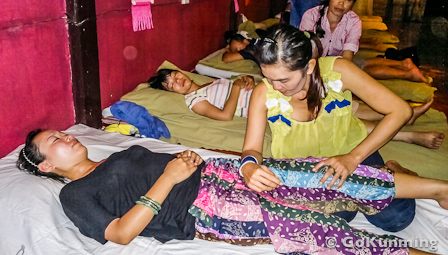 Chinese tourists from Xiamen on their first trip abroad.

Many Chinese tourists looking forward to a tropical vacation are avoiding traditional destinations like Hainan's Sanya (三亚). They complain that domestic prices are too high and instead look to international travel for other options.

For some Chinese, venturing to places like Chiang Mai can be challenging, especially for those who don't speak English. There are almost no travel agencies in town with information in Chinese.

Even the five-star Mandarin Oriental Luxury Hotel only has one staff member who can speak the language. "I've been overwhelmed this year," Mrs. Tian, a former Kunming resident, told me. "Chinese now make up more than half of our customers and I'm the only one here to handle all of their questions."

Among those in the tourist business in Thailand, Chinese still have a reputation for being rather impatient and abrasive. But traveling has a learning curve and ten years ago American and European tourists in Asia were often described the same way.

"For now," one local tour operator told me, "we're just happy to have their money. As far as courtesy goes... it will come in time."

Come on, ...the real thing hasnt even started yet. The new bridge across Mekong at Huay Xai is being built, so soon there is a bus from Kunming straight to Chiang Mai. The train through Laos will add a few tens of thousands more, and Air Asia, Jetstar etc, budget airlines (and non budget too) will in a while double that, - i.e. once they launch flights to the new Kunming airport. No to mention, theres a road and border-crossing through Burma from Jinghong, to Mae Sai north of Chiang Mai and its a matter of time when its being made into a functional highway. Mae Sai is already preparing its infrastructure for a massive Chinese wave, with Chinese hotels coming up like mushrooms, and restaurants of course.

A handful Chinese now in CM is just a drop in the ocean of what is about to come.

Any idea when the railway to Thailand opens to tourists?

invisible... many countries involved in that and they are just starting (with the easy part - within China). Expect it to open somewhere near the end of the decade (if ever!). The geopolitical issues of giving China a brand new railway into the heart of countries that could be adversaries if the South China seas issue flares up are rather large...

Excellent article! Very informative piece on an obscure but snowballing impact of Chinese tourists on neighboring countries. Sure China has the most number of millionaires in the world but a slow growth in the middle class, who are also curious and travel hungry, will spark budget / mid level tourism. Thanks for the write up.

@Peter99, I agree that there could be many more independent Chinese tourists in Chiang Mai, or indeed in many other parts of the world in the future.

I have seen many independent Chinese tourists, many travelling by themselves in places like Thailand, Vietnam and Cambodia. They usually have enough English to at least order from a menu though. It's kinda ridiculous for people like the young Chinese tourists above to not know what they "are ordering". If you ask me, except at Wenlie Jie and a few downtown areas, it's much more difficult to know what you are ordering in China!

Contrary to what is stated in this article, I don't think the Chinese can take away Thai jobs or properties because unlike in Laos, the Thais are fiercely protective of their rights and know what they are. Also, foreigners can't own land even if they become married to Thai citizens. With the exception of jobs requiring Chinese language skills, Chinese citizens wouldn't be able to find work in Thailand either and they can certainly forget about working in protected sectors like farming etc. so I think the fears raised above are unfounded unless Thailand opens up more but their restrictive property and work laws are probably in place to avoid such a scenario.

However, for now, the Chinese train project from Kunming through Laos connecting all the way to Singapore is not going to happen, but the Thais seem to be confident about a possible Japanese investment for some domestic HSR (high speed rail) lines in the near future. Personally, I would still put my money on the Chinese coming through eventually, but it might take 10+ years to happen so the original opening date of 2015 is now nothing more than a pipe dream given that the Chinese have now scaled back on HSR projects given safety issues, the resignation of the railway minister etc.

The road through Myanmar (Burma) from Mae Sai/Tachileik to China has too many restrictions on travel and since the Mae Sai crossing only allows travel to/from Mae Sai it can't be used by anyone planning on travelling overland between Thailand and China via Myanmar territory; thus Chinese and Thai/third party tourists/businesspeople etc. travelling overland between Thailand and China must go through Laos (or alternatively, Laos and Vietnam). I hope that with the recent positive developments in Myanmar that an overland route connecting Thailand and China and an upgrading of the Chinese/Burmese border post to an international one will happen, but until it does it won't become an option for anyone.

I wouldn't put my money on low-cost flight options to Kunming happening anytime soon, though eventually they should come through put this will depend entirely on demand for such services.

@invisible, the railway link from Kunming to the Vietnamese border has existed for like 100 years but only now does it look like it will reopen again after being closed for roughly 10 years now. As such, this will mean you can once again travel by rail from Kunming to Hanoi and beyond to Ho Chi Minh City. When it opens is unclear, but I'd say give it a year or so.

well...as nobody could have imagined in, say year 2000, that ten years later a new city is built on kunming,... same is the thing today: things are going way faster than it looks behind a capuccino in hangover on wenlin jie, or wherever.

anyway, back to the point. the article on gkm lacked to mention the asia highway bridge - r3a highway - connecting china and north thailand, which has a profound impact to arrive. and very soon so.

about budget airlines coming to kunming, this is already known news. even that air asia is coming.

these are two very concrete things, likely ready in a year. the rest we can leave for further speculation.

and its all good. ..a blood vein connecting cm and kmg is culturally needed. as the alcoholic expat communities in chiang mais writers bars, have a great deal of societal and historical knowledge on yunnan, yunnan minzu and china in general, to share to the expats in yunnan.

the english journalism there is also on a different level.

being an expat rockstar in asia, was something that was over in cm, say in the 80s or so, and focus took a step further.