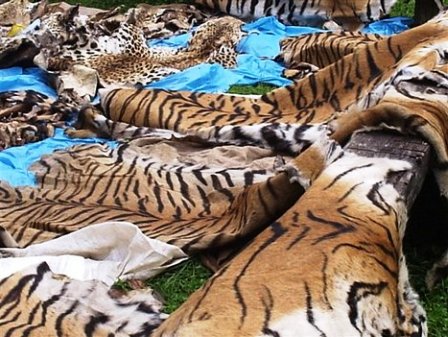 The annual trade in endangered animals worldwide is estimated to be worth 20 billion dollars, trailing only guns and drugs on the illegal market.

A report released this week by the World Wildlife Federation (WWF) graded countries on how well they enforce anti-poaching and trafficking laws. Yunnan neighbors Laos and Vietnam were singled out as two of the three worst countries in the world when measured by WWF standards.

Perhaps surprisingly, China was given high marks in two of the three categories that comprised the grades. Despite being the leading worldwide destination for illegal animal parts, China scored highly for enacting increasingly stringent laws against the trade in endangered animals.

Yunnan however, still remains a major gateway for illegal shipments of endangered animals largely because it shares borders with Laos and Vietnam. The WWF report stated that "Laos is recognized as both a source and transit country while Viet Nam [sic] is a transit hub for illegal wildlife trade."

Yunnan, Guangxi and Guangdong provinces receive almost 70 percent of all illegal animal shipments coming into China, according to a report by CNN.

The WWF report focused specifically on the trade in elephant ivory, rhino horns and tiger skins, bones and organs. Poaching of those three animals is rising and has led many countries to suggest the Convention on International Trade in Endangered Species (CITES) has failed.

The convention went into effect in 1989 and has been signed by 175 countries. This week at a United Nations (UN) conference in Geneva, a CITES commission suggested trade in ivory should be legalized once again. The issue is currently under debate by UN delegates.

Confusing the issue of poaching is the thriving business in some countries of farming endangered animals. Tiger farms in China, Thailand and Laos insure that ingredients for many Traditional Chinese Medicine remedies, as well as pelts, are available outside of international law.

Earlier this month 3,600 farm-raised endangered crocodiles where seized by police in Guangxi en route from Vietnam to Guangdong. Critics of "exotic farms" say they do nothing but encourage buyers who cannot differentiate between wild and farm-raised animals.

Wild tigers and elephants do still exist in Yunnan, although their numbers are diminishing due to habitat loss and poaching.

On a recent visit to the Bird and Flower market in Kunming, I came across some very exotic looking animals. When I took my camera out too take photos I was told to put it away and go elsewhere. I later checked out the internet for a turtle species that looked really unusual and came up with something on the IUCN endangered list. It could have been a black breasted leaf turtle. I also saw two baby chinese alligators that I'm pretty sure were not for pets but possible human consumption as their meat is thought to be a treatment for cancer.

Are pelts still sold in Kunming streets?
I remember seeing on a few occasions a cart wielding man with pelts. Some were similar to snow leopards.

The guys selling pelts usually arrive in late autumn, all over China. The ones I am thinking of look a bit like frontiersmen, with their fur hats and scrawny black beards. These guys sell dog pelts, they are often sprayed to look like leopard, tiger, etc.

I saw pelts of big cats being sold at the Guandu Old Town on Monday. The shop owner said they had come from Burma and weren't just dog pelts dyed. They looked pretty genuine.

And you believed him?

If the snow leopard was fake it was a dam good job.

If the snow leopard pelt was real it would fetch a very high price and I doubt it would have been for sale on the street.
Although I agree, the Chinese are not very good at faking.