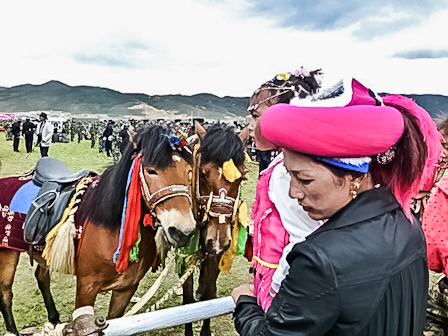 Of all the festivals held annually in Yunnan, perhaps the most adrenaline-fueled is the horse festival in Shangri-la. Seattle-based writer David Berger, who works with Friends of Dunhuang in Gansu province, traveled north from Kunming this summer to check out the festival, take some photos and share his experiences.

In early summer hundreds of horsemen and thousands of locals and tourists descend on Shangri-la (香格里拉) for the area's annual Tibetan horse racing festival. This year the three day event, called saimajie (赛马节) in Chinese, was held from June 23-25.

The festival attracts minorities and locals from the surrounding mountains and plateaus who pack the town formerly known as Zhongdian (中甸) to witness horse races, acrobatics and all other manner of competitive horse-riding skills.

By 7:30am Saturday morning people were lining up outside the newish stadium trying to secure good seats. The stadium is a 25-minute walk from the city's old town, althouh many festival-goers drove their own cars or hailed taxis. The 25,000 seat stadium was more than half full by midmorning. 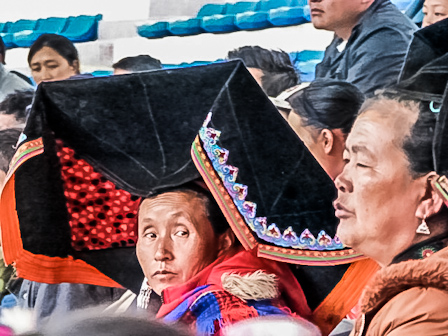 There was a strong security presence inside and outside the venue. Bags, water bottles and food were not allowed into the stadium and no one appeared to have been informed beforehand.

Purses and backpacks had to be left outside, thrown into massive piles near the entrances. Inside the stadium no one was allowed to stand and a smoking ban was strictly enforced.

After several speeches, dancing performances started at 10am with scores and at times hundreds of dancers twirling flags in swirling and pulsating patterns resembling blooming flowers. Between dances brightly-dressed horseman showed their skills, doing handstands and other feats while their mounts galloped around the field. 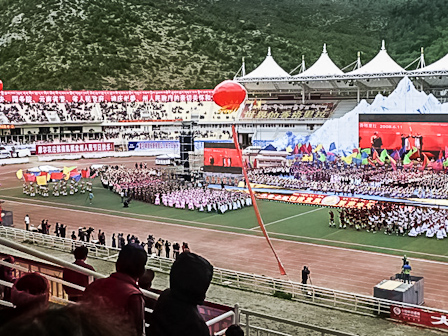 The dancing ended around noon and everyone piled out of the stadium and headed a few kilometers south to the outskirts of the city. There, in a huge field positioned between the airport and the nearby mountains, the festival began in earnest.

People gathered three and four deep around the oval horseracing track, and good views of the horses and ponies speeding past during trial heats were hard to find. We arrived at 9am the next morning to insure a good spot overlooking the racetrack straightaway. 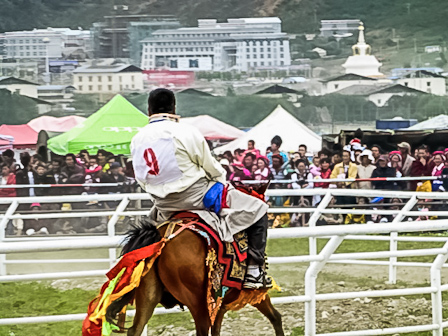 The festival grounds were open to the public and a stroll around them gave us a chance to mingle with horses and their owners. Many of the horses were festooned with ribbons in their tails and manes. Tents were set up to sell barbecue and other snacks. Between races people relaxed under tents or tended to their ponies.

The festival is held according to lunar calendar calculations and this year started June 23. The rainy season had begun, so an umbrella was handy. Mist and light rain were intermittent and temperatures were mild — the mountains provided a gorgeous background to the festival.

The second and third days of the event, Sunday and Monday, were less crowded, and included competitions where riders hung off their speeding mounts to snatch white scarves from the ground. These performances were the audience favorite. 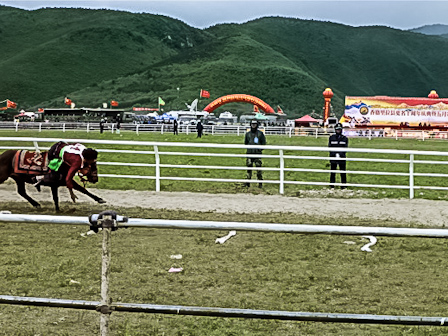 Transportation to and from the festival was confusing. Although there was a nod to bus service, it was chaotic and near useless and cabs were a better option. Prices during the festival were higher than usual — five yuan instead of one for the bus and 30 yuan for a taxi. The few buses that did appear immediately filled to overflowing and there were no scheduled bus stops.

Hiring a car is also possible and we did on day two, paying 150 yuan for the entire day. Bike rentals are available in the old town and at guesthouses but the dirt roads leading to the racing grounds are pitted and full of monstrous potholes. 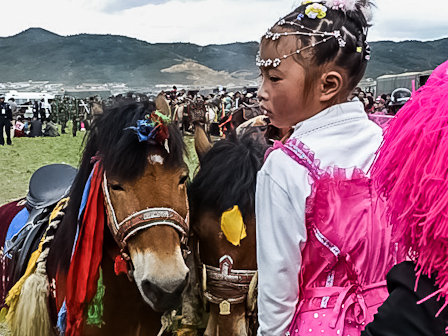 Anyone know when this is on this year?

In early May I think.

Found this; "Horse Race Festival: It's celebrated on May 5th according to the lunar calendar every year. The horse race is held at the foot of Wufeng Mountain and lasts for three days."

Cheers Geezer, dang, we are going to miss it then. I saw this one was on the 23rd last year so was hoping for similar time.

There is a line on that site you posted that says "Horse races" in Zhongdian for the 12the of June, but thats still a bit early for us, bugger.

May 5th is Lunar calendar. I think that converts to June 12 in Julian calendar in 2013, but I am not sure. Check it,