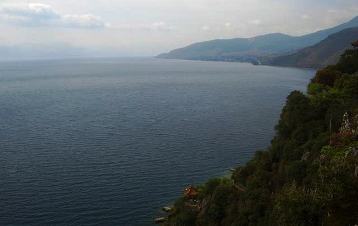 Just 65 kilometers south of Kunming, Fuxian Lake (抚仙湖) is China's second-deepest lake and Yunnan's deepest, reaching more than 150 meters below the surface. This depth gives the water a striking cobalt color. We arrived at Fuxian Lake's windy north shore, the vast body of water feeling more like a sea than a lake.

Fuxian Lake officially opened for tourism in 1988. Development was slow and steady during the early years, but as more and more Chinese have the time and resources for vacations, activity around the lake is picking up.

One of the developments, Luchong, is a small half-built resort town. Bulky and brightly colored pedal boats line the beach. Along the boardwalk, there are four-wheelers for rent while gangs of local men stroll along the boardwalk, cigarettes dangling from their lips. Dissonant Karaoke sounds blare out from lakeside tents. Snack vendors selling shrimp on a stick are lit from the glow of carnival lights.

In the restaurants of Luchong, there are dozens of kinds of fish on offer. Perhaps the most unique is the kanglang fish (抗浪鱼), aka Schizothorax taliensis, a once-plentiful fish found exclusively in Fuxian Lake. The fish are only 10 centimeters long - it would take at least a dozen or so to make a meal. Despite its status as a second-level protected animal locals stew kanglang in copper pots and serve it with chili pepper.

In recent years Fuxian Lake's kanglang population has dwindled drastically, a trend reflected on local restaurant menus in which the fish go for as much as 2,000-3,000 yuan per jin - roughly half a kilogram. The price of Kanglang Fish has risen 125,000% in the last ten years. In the mid-nineties a pair of kanglang cost eight fen, or one-one hundredth of a yuan. Today they cost around 100 yuan.

Every May until 1998 Fuxian's kanglang would hatch in such massive numbers that they would change the usual deep blue water to the fish's silvery-white color. Area resident Yang Lan, explained what May was once like on Fuxian Lake.

"We didn't even usually eat kanglang back then. I personally preferred shrimp," she said. "We'd all go out in wooden boats to watch the kanglang and take pictures. They were everywhere - we used to catch them with our bare hands." 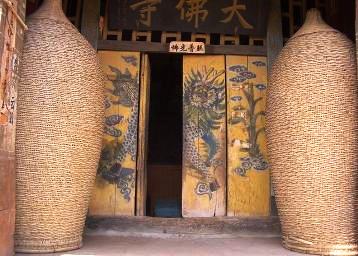 In the old fishing villages along the lake, you can still see the remains of what some locals jokingly call, "The Fish Festival". Large wicker containers roughly two meters in height once used for catching thousands of kanglang at a time now stand in the doorways of houses and temples, dry and brittle from disuse. Today, they are mere porch decoration.

The story goes that in the late 1990s, a new species of fish, silver fish were introduced to the waters of Fuxian Lake. How they arrived and propagated so quickly is lost in legend. But some say the silver fish promptly began eating the eggs of the kanglang, decimating the fish's next generation. Regardless of the accuracy of this theory, these silver invaders are thriving in their new habitat.

Above Fuxian's deep waters, a world away from the kanglang's plight, life on the lake continues as it has for as long as anyone can remember. Fishermen lean back on the seawall, their poles bending forward toward the water. Children play in the choppy waves on the lake's edge.

Fuxian Lake (抚仙湖) is 65 kilometers south of Kunming and can be reached by bus in an hour and fifteen minutes. Buses leave from the East Long-Distance Bus Station (东部客运站) to Chengjiang (澄江) frequently and cost 15 yuan. Chengjiang is a town on the north end of Fuxian Lake. From there, you can hire a motorbike taxi for a few yuan to take you to the lakeside a few kilometers away.

Interesting piece. I did some research on this fish last year when I was living in Yunnan -- the fish is endemic to Yunnan and exists no where else in the world. The name 'Taliensis' comes from 'Tali' aka Dali, where the fish was first discovered in Erhai. At this point, it has almost completely disappeared from that watershed and can only be found in a vacluvian spring in Eryuan county. Locals belive they died off due to water pollution -- chemical runoff from surrounding fields. Good to know that there are some still surviving in Fuxian Hu. Oh yeah, also, up there they refer to it as Gongyu, or 弓鱼.

This article recalls sweet memory... 20 years ago, going to Fuxian lake for holiday in summer with parents, getting tanned like African kids, eating kanglang fish, catching silver fish with bare hands... time flies and I am coming home...

really? I never saw and ate that fish even I have ever been to Fuxian Lake.