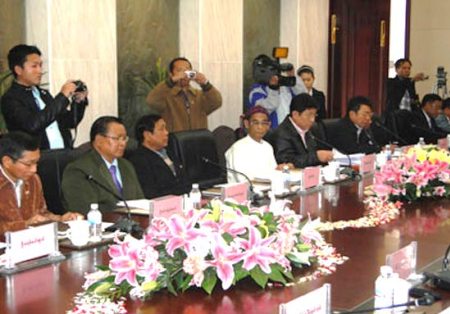 From March 8 through March 10 the western Yunnan city of Ruili hosted the third round of peace talks between Myanmar and Kachin State since a 17-year truce with the Kachin Independence Organization (KIO) fell apart last June.

The talks, which failed to yield any substantial agreements, took place three weeks before scheduled parliamentary by-elections in Myanmar on April 1 in which Nobel Peace Prize winner Aung San Suu Kyi is running for parliamentary office. Representatives from the Myanmar government and the Kachin Independence Army (KIA), the military wing of KIO, have agreed to continue dialogue.

A report in The Hindu quoted KIO peace group leader Sumlut Gam as saying that he hoped for a peace deal but "mutual trust still needs to be built up and has not reached a solid level yet".

Meanwhile, 60,000 people have been displaced, the majority of which are believed to have fled into western Yunnan to escape the ongoing violence. An article in The New York Times suggests that Myanmar's army is the aggressor, subjecting ethnic Kachin to frequent mortar fire, rape, torture and execution.

Myanmar President Thein Sein, whose recent moves toward reform have been cautiously applauded by foreign governments, publicly declared a ceasefire in Kachin State last December. Continued violence in the region has led observers to wonder whether he is unwilling or unable to control army activity in the country's north.

No details on future peace talks have been made public.

The Ruili peace talks are a rare example of international diplomacy on Yunnan soil. Given the province's proximity to geostrategically important Southeast Asia, it seems likely that the province will become increasingly important to Beijing as a conduit for projecting power in the region.

In addition to the Ruili talks, Yunnan has recently served as a point of departure for Chinese patrols of the Mekong River after the mysterious murders of 13 Chinese nationals on the river last October.