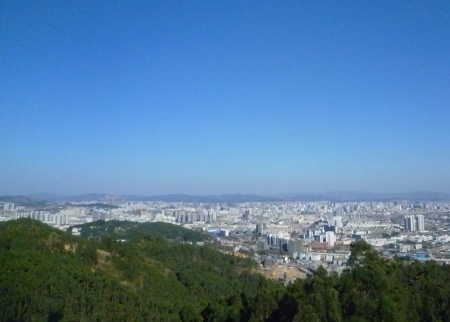 The recent clear skies may be pleasant, but this city needs rain

Today's top headline at Kunming Information Hub says it all: "Since July, 470,000 people in Kunming have had difficulty obtaining drinking water – 88 reservoirs are completely dry"

For the fourth consecutive year Kunming is entering spring facing serious water supply issues. Municipal officials have told local media that the amount of water currently available to the city is "basically sufficient".

But with another two to three months before the monsoon-driven rainy season begins, the most recent batch of statistics to be released is far from reassuring.

In addition to the nearly half million people living around Kunming that have been grappling with a water shortage for the last six months, nearly 230,000 head of livestock are also suffering.

At the moment, 29 rivers and streams around Kunming have disappeared and 88 reservoirs have completely dried up, according to official statistics.

In 2009 and 2010 Kunming experienced its worst drought in a century - a crisis from which it has not yet recovered. 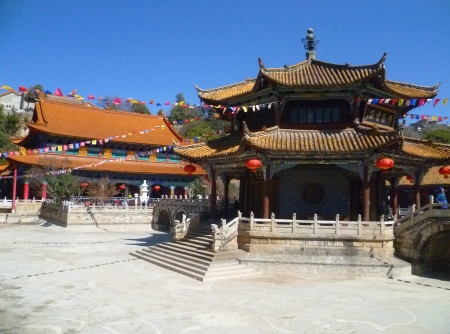 Yuantong Temple's now-empty pool may have to wait for water

Kunming's two main water sources, the Yunlong and Songhua reservoirs, have water levels that local media is describing as "obviously not enough" to meet the needs of Kunming's four main urban districts. The Yunlong reservoir is reportedly down to less than one third of its storage capacity.

In an attempt to meet demand for water, city water supply officials recently reduced the minimum amount of water stored in the Yunlong and Songhua reservoirs from 7,000 cubic meters to 4,000 cubic meters.

The current drought is not only threatening area drinking water supplies and affecting agriculture and industry, it has created optimal conditions for wildfires.

Thursday afternoon a fire on Changchong Mountain in Kunming's north that at its largest was 400 meters across was extinguished by more than 200 firefighters.

There is no way to predict exactly when the rainy season will begin, but it would seem that droughtwise things will get worse before they get better. Weather forecasts for Kunming are projecting sunny skies, rising temperatures and zero chance of precipitation for the foreseeable future.

it's worth it for all this beautiful weather

Yet some people still pretend there's no global warming.

I hear the water supply will be cut off on various days in various parts of the city soon. Apparently there are warnings in local newspapers. Any chance GoKunming could announce these on the website as they are publicised, for those of us who don't read Chinese?

We used to (um still do) have these kinds of periodic droughts in Northern Queensland, Australia. The droughts would typically run 5-7 years, then boom - a couple of seasons of torrential rains and flooding. That was decades ago - before we learned to blame good or bad weather on global warming.

@yo dog, I second that. Finally Kunming has had a few weeks of uninterrupted beautiful weather. Previously you got maybe 3-5 days of good weather, followed by that awful high fog which would never go away and brought down temperatures by 10 degrees or more - sometimes you'd have to wait a week or more for the sun to return so you could take a proper hot water shower using your solar hot water heating system, rather than boiling water and mixing it with cold water in a tub so you can splash it over you. When it's cloudy in Kunming, life sucks in more ways than one.

Enjoy the sunny weather while it lasts! It's warm (during the day), you can take a shower, and you'll be in a good mood.

It`s pretty sad to hear the above comments (yo dog, Tom). u guys worry about a fucking warm shower while the yunnanese have to worry about getting enough water for their crops and animals.

if u don`t like the winter in kunming (when it is not sunny), fuck off. at least than we safe a bit water.

My neighbourhood (up a hill, off XueFu Lu) has been without running water for 2 weeks. The water company say they can't pump water up the hill in the drought conditions. Just wondered if anyone else is experiencing rationing or is it just us?

what the Hell is up with this weather. If we don't get some rain soon, or at least some cloud cover, we might be on the verge of an epic natural disaster of sorts.

The rainy season usually doesn't start until about July or August.

There were a couple of days we ran out of water in the afternoon/evening this month, but it hasn't happened since. I live near Yunnan Yingxia on Chuanjin Lu.

The management said Kunming only has about 50% of the water it needs. I've heard as low as 30%.

yo dog, I though you enjoy paying the price for the "nice weather".

"While cereal crops such as rice or wheat require between 0.84 and 1.3 cubic meters of water for each 1 kilogram of yield, it takes about 12.6 m3 of water to produce 1 kg of beef. Even though meat and other animal products made up only 16 percent of the typical Chinese diet in 2003, those foodstuffs accounted for more than one-half of the country's food-related per capita water consumption,." Science news, January 19, 2008.

I fully agree with Fried. Get a water heater if you so badly need hot showers.

Dali beer is good to bathe in I hear!

''It`s pretty sad to hear the above comments (yo dog, Tom). u guys worry about a fucking warm shower while the yunnanese have to worry about getting enough water for their crops and animals.

if u don`t like the winter in kunming (when it is not sunny), fuck off. at least than we safe a bit water.''