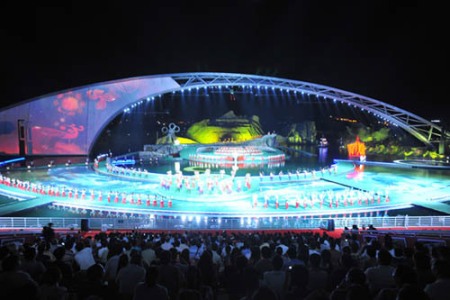 Since the late 1990s governments around Yunnan have spent increasingly large amounts of money on projects that commoditize local minority culture for tourist consumption.

The most successful example of this business strategy is Impression Lijiang (印象丽江) the music and dance performance created by Zhang Yimou (张艺谋), the director of acclaimed films including Red Sorghum and Raise the Red Lantern.

Set in Lijiang with Jade Dragon Snow Mountain in the background and featuring elements of local history and Naxi culture, Impression Lijiang has been packing in the tourists, taking hundreds of million of yuan in ticket sales annually. Impression Lijiang has been so successful that some Chinese financial commentators have labeled it "China's top artistic performance investment".

Last year Dali, which has long been number two to Lijiang in tourist visits, and Farewell My Concubine director Chen Kaige (陈凯歌), who has long stood in Zhang's shadow, unveiled Imagining Dali (希夷之大理), a music and dance performance staged in the northeast corner of Dali's old town with the Cangshan mountain range in the background.

But unlike its Lijiang counterpart, Imagining Dali has not boosted Dali's economy or raised its profile as a tourist destination. What was once touted by local officials and media as a "flagship tourism project" for Dali is now being acknowledged as a very troubled investment.

A recent Kunming Information Hub report has declared that the performance has reached a "box office crisis", noting that most nights the Eye of Dali Dream Theatre, where the show is held, has few audience members, with the number of attendees roughly the same as the number of performers.

Nevertheless, the show goes on nightly from 8:45 to 10:30, creating substantial noise and light pollution that can be felt throughout much of the old town. Prior to annoying many local residents with its loud nighttime performances and morning rehearsals, Imagining Dali already rubbed many people the wrong way by destroying a reservoir that had been used by nearby farmers for irrigation.

With a total investment of over 370 million yuan (US$58.6 million) and the backing of a government-owned company, Imagining Dali is an expensive and high-profile tourism investment. It was originally hoped that Zhang would create an outdoor performance for Dali, but due to an exclusivity clause in his Impression Lijiang contract, Zhang was not allowed to create such a performance elsewhere in Yunnan. 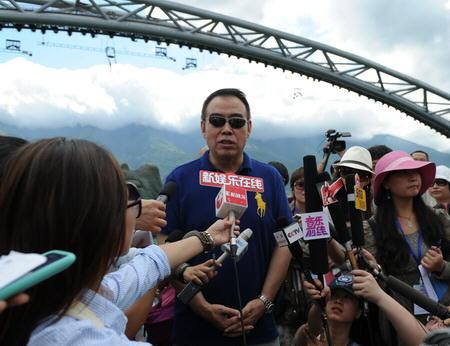 Chen Kaige before the opening performance of Imagining Dali

After failing to land Zhang, investors contacted Chen, whose career had been on a slow downward trend with recent highlights including the highly commercial The Promise and the government-produced patriotic film Founding of a Nation.

The concerns raised by the destruction of the reservoir are not the first instance in which Chen's work has drawn criticism for potentially harming the environment in Yunnan.

In 2006, Chen was fined US$11,250 for destroying vegetation at Bigu Lake in northwest Yunnan during filming of The Promise.

As things stand right now, attendance of Imagining Dali is dismal. Organizers are citing three primary reasons for this – cold weather, the need to nurture the market and Dali's challenging tourism environment.

Should Imagining Dali stage a remarkable turnaround and become profitable this year, it is possible that it will manage to become an accepted part of Dali's old town. But if attendance fails to pick up after the passing of winter, it is likely that the stage and the performance itself will be viewed locally as embarrassing monuments to Dali's obsession with trying to emulate Lijiang.

Yeah, for what ever reason the Dali government is trying to copy the success of Lijiang very f....ing hard. Instead of thinking of something different they have to always do the exact same thing Lijiang tried
And come on, you guys got way more resources than Lijiang in the greater Er Hai area.
I seriously worry that the charm which Dali still has will be gone very soon by whatever the government is trying to do.

Totally agree with both the closing paragraph of the article and with Fried's comment's... it is a total Impressions LiJiang rip-off... but what else would you expect in China? I was just mentioning yesterday that I saw a couple stores selling those African djembe drums in Dali's Old Town now... if you've been to LiJiang then you'll know that almost every store there has been selling them for awhile so I guess the local business owners saw they were selling them in LiJiang so figured they'd copy and start selling them in Dali... Imagining Dali is the exact same thing on a much larger scale. Hey it's working for LiJiang so let's just copy them!

...I'm not getting down on China or the Chinese (i love them both), but why can't they just put as much effort into an original idea as they do to copying old ideas? Obviously copying is nothing new in China and nothing I need to point out to anyone reading this but c'mon!!! 370million rmb for Imagining Dali? I live in Dali and looking around I could certainly see a lot better uses for the money than a HUGE empty theater... Walk around the streets at night, you can clearly see that LiJiang has enough tourists to support Impressions LiJiang whereas Dali's tourist numbers are not even close enough to support Imagining Dali.. even if every single tourist in Dali went to the show every night it wouldn't fill that huge eye-sore! And how much are tickets? like 300rmb i heard? How many back-packing tourists in Dali are gonna drop that cash to see a simple dancing and folk music show?

...I think the gov't should have asked me first, I coulda told 'em it wouldn't work and saved them 370 million!!!
Chinese people: Cool. Chinese business men: retards who only got where they are through connections or underhanded ways with no emphasis at all placed on a little something we call 'competence' in the West