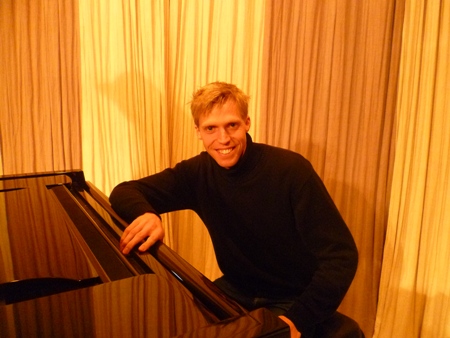 The first time we saw Martin Berggren perform, he was accompanying award-winning jazz singer Sinne Eeg and her band on piano. We mistakenly thought he was a throw-in musician who was there simply to add another dimension to the show. As it happened, Martin's virtuoso performance was one of that night's biggest and most welcome surprises. Not only was he tearing it up, he was obviously having a great time and his enthusiasm fed back into the band and the audience.

The second time we saw Berggren play piano he was accompanying six Vietnamese đàn tranh musicians for several spaced-out experimental pieces. At one point, he left the piano and conducted the đàn tranh troupe as it played an entertaining piece that he had penned a few nights earlier in an insomnia-fueled fit of creativity. Despite his unfamiliarity with the traditional Vietnamese instrument, his song and its expert playing by Nguyen Thanh Thuy and her apprentices was one of the several highlights of that evening.

Berggren, who hails from Linköping, Sweden, works at TCG Nordica as a jazz piano teacher and a course leader for a Chinese language and culture immersion program for Swedish, Norwegian and Danish students in Kunming. Aside from that, he plays piano and guitar, sings and/or writes for performances at Nordica.

The energetic and upbeat 30-year-old will once again be on stage at Nordica this Saturday, October 29, for a concert he has arranged, entitled "Chinese Standards". We sat down with Berggren at Nordica for a coffee and a chat about his views on music and what to expect at Saturday night's show:

GoKunming: How did you end up getting into playing piano?

Martin Berggren: I've been playing since the first grade, when I was seven and a half. We got this small electric keyboard for Christmas and my brother and I started playing it. Like most pianists, I started off playing classical piano, but I was bad at reading the score, so it would take hours to finish a simple piece. This forced me to get good at memorizing pieces.

At 16 I had a teacher who was more chord-based and into playing more popular music, playing your own style, playing different styles. After high school when I was in folk high school, which was pre-conservatory, I focused mainly on jazz and improvisation. Then I went to conservatory in Malmö.

GK: What was the focus of your conservatory studies?

Berggren: The focus was jazz and teaching – I was studying to be an instrument and ensemble pedagogue. But I also did a lot outside of school – things such as shows and musicals. I wrote a musical called "Booh!" which was a humorous thriller. Those times I did a lot of conducting as well.

I've always liked the idea of playing everything – there's not much music that I don't like. That has always been my thing – I've always had a wide range of interests. 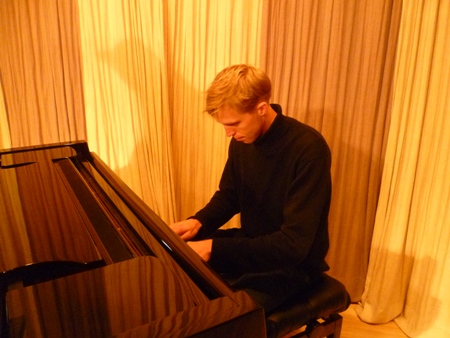 GK: Will this be your first solo concert in Kunming?

Berggren: No, I've played one solo show here before. Actually, this concert won't be much of a solo concert. There will be a lot of people involved. I've played a lot here in Kunming, but this will be my first time trying to play Chinese songs. The concert is called "Chinese Standards" – I wanted to see if there were any famous Chinese songs that could be clothed in jazz, so to speak.

At first I was skeptical. I thought maybe it would not be possible because Chinese songs seem so different from Western songs. I think the main difference is that Chinese songs are pentatonic.

Chinese music doesn't have that, so it's rather like a state, or a circle, rather than an arrow. No tension, no release, you just have, which feels very Chinese. Everything is connected, it's like taiji or qigong. So, I had to figure out how to connect two very different styles.

GK: Did you manage to do that?

Berggren: [Laughs.] You've got to come to the concert to see! In seriousness though, it was a pleasant surprise and things turned out quite jazzy. I've been giving myself a lot of freedom with the music. I listened to the original songs then turned them upside-down, cut them in half and did other things to them so the songs may not be very recognizable, at least not immediately. 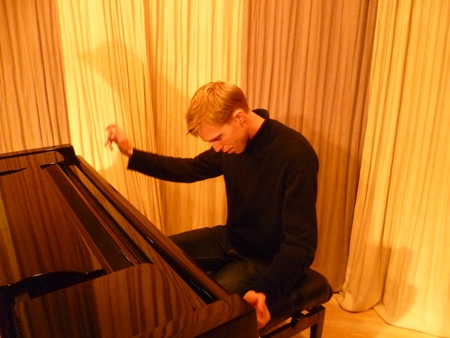 GK: Why did you decide to take on such a challenging theme for your concert?

Berggren: I guess I have three reasons for that.

The first reason is I just wanted to play with my friends. Right now there are a lot of players in Kunming, from China and elsewhere. We'll have double grand pianos on stage at one point, which will be interesting. Also, a friend of mine just bought a vibraphone, which may be the only one in Kunming, so that will be fun to play with.

The second reason is that I wanted to get to know Chinese music. I've been here one year, and even though I'm a musician I haven't gotten into Chinese music. I asked my Chinese friends for a list of famous songs and then looked into them. Now I know a lot of Chinese songs.

The last reason is more about jazz. I think for many people that are not used to jazz, it can be difficult to get into, because they're not familiar with the style of music or the songs themselves. By using popular Chinese songs I'm hoping to remove one of these obstacles. That's actually how I got into jazz. It was only when I heard jazz versions of Swedish folk songs that it started to really make sense to me as a musical style.

GK: We've seen you play piano as well as conduct musical pieces that you've written – which do you enjoy more?

Berggren: The nice thing about music is that there are so many possibilities – you can write, play or listen. For me, if I were to do only one thing, I'd miss the other things. In the last year here I've had a lot of magic moments, for example playing with Sinne Eeg and writing and singing for a dance performance. I also wrote a song for a drama performance with Chinese lyrics, which was a big challenge.

Having a performance with lots of people attending is incredible for me. I enjoy the variety of performances here, Nordica is the perfect venue for me because there are so many different kinds of opportunities to experience music.

GK: What kind of performance can the audience expect this Saturday?

Berggren: I've split the concert into two sets. The first set will be songs related to China but not necessarily Chinese songs, so Westerners in the audience may recognize a few of them.

The second set will be a jazz trio, with piano, bass and drums, and we'll be playing Chinese standards. Hopefully there will be something for everybody!

Martin Berggren's concert "Chinese Standards" will take place at 8pm at TCG Nordica in the Loft/Chuangku art compound. Tickets are 50 yuan/person at the door or 45 yuan in advance at Wheatfield Bookstore, Sanlou Bar and, of course, TCG Nordica.

Martin: If you or anyone you know is interested in starting a funk band please contact me at philkazlauskas@gmail.com or 13648843044
Thanks