This Thursday will not be the first time that Kunming has participated in World Car-Free Day, but it will be the least amount of effort the city has put into the event in four years.

From 10am to 3pm all private car and motorcycle traffic will be banned on the two-kilometer loop comprised of Cuihu Bei Lu, Cuihu Xi Lu, Cuihu Nan Lu and Cuihu Dong Lu, the four roads that encircle Green Lake Park, according to local media reports.

No-car days here haven't always been this feeble. Kunming held its first no-car day on September 22, 2007, shutting down all private traffic for 12 hours (7am to 7pm) and garnering praise for having one of the biggest and most successful no-car days in China. 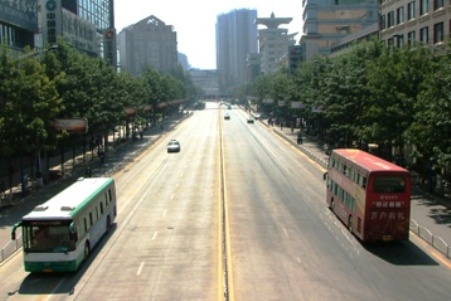 This year's no-car day should have no noticeable impact on the city's traffic, but in 2007 it was estimated that more than 200,000 private cars were prevented from driving within the area contained within Huancheng Bei Lu, Huancheng Dong Lu, Huancheng Nan Lu, Xichang Lu and Yieryi Dajie.

In October 2007 Kunming leapt to the top of many people's "most progressive cities in China" lists when it announced that it would observe monthly no-car days, banning private car and motorcycle traffic from the same area from 9am to 7pm on the fourth Saturday of every month.

Air quality improvement was one of the main reasons provided by the Kunming municipal government to justify the no-car days. According to government statistics, on the first no-car day in Kunming carbon monoxide levels dropped 32.9 percent, nitrogen dioxide levels dropped 45.1 percent, ozone was down 39.5 percent, carbon dioxide was down 15.4 percent and airborne particulate matter was reduced by more than one-fifth.

City officials upped the ante in February 2008 when they extended the scope of no-car days beyond the first ring road. On odd-numbered months, private cars with license plates ending in even numbers would be banned from driving between the first and second ring roads, and vice-versa. The time of the no-car days shrank by two hours to 9am-7pm.

Six months later in August 2008, city managers decided that they had taken things too far and decided to return no-car days to their original scope – essentially the first ring road. Hours were reduced to 9am-5pm.

Shortly afterward, monthly no-car days were canceled by the government, which said that the wholesale demolition and rebuilding of the second ring road was putting enough stress on the city's traffic infrastructure to make no-car days impractical.

On September 22, 2009 Kunming held a 12-hour no-car day, followed by a severely emasculated no-car day in 2010 that only included the road around Green Lake Park, plus segments of Beijing Lu and Dongfeng Lu.

This year's almost nonexistent no-car day suggests that there are so many cars in Kunming that the government is incapable of mobilizing sufficient resources to control car use. This is not surprising given that at the end of 2010, when traffic congestion was already a major problem, the city was adding more than 1,000 newly registered cars to its streets each day.

Editor's note: Thursday's no-car day will not include pedestrian bridges.

Editor's note derserves a deeply felt: Hahahahahahahaha! Time to get the hell out of this craphole.

Call me an optimist but I think once the Subway is up and running there is going to be a substantial drop in car usage and ownership. Its fairly obvious that Kunming has had some major developments of new living/working areas on its outskirts over the past 10 years with nothing built to connect them together (except for the overcrowded bus systems). The result is people somewhat needing to own a car to enable the to get around efficiently. The subway (once full implementation happens) should go a long way to solving the problem provided the integrate effectively with the bus system... lets just hope its that simple (I did say I am an optimist!).

blobbles, your optimism is admirable, and i don't think entirely unjustified.

however, i think we still have years to wait before the situation really improves. i'll try to keep it short:

car ownership is not motivated by practical concerns alone, conspicuous consumption is also a factor. previous efforts at competently managing transport infrastructure have been unimpressive. pedestrian and two-wheel transport infrastructure is being neglected. the taxi fleet is too small and not growing with the city. car parking is impractically implemented and not sufficient. traffic law enforcement is minimal to absent.

I would agree... they have given up. It won't get better because people here have and use cars as status symbols. Since people can't be expected to maintain their own bodies in a healthy manner, how can you expect them to care about the environment? I have been here 7 years and would agree Kunming has become a craphole. Of course who cares what a bunch of filthy white barbarians have to say?

I was also thinking about how Kunming has changed, I wonder if the top government officials in Kunming were locals would have made any difference?

I dont think the subway will create any incentive for car owners to park their wheels and not flaunt their dream machine in the streets of Kunming.
Owning a car is not only a convinience it's a status..

@Jaya, who you calling filthy barbarians? I wear so much cologne you can smell me from a mile away (in a good way)...hahaha, just kidding...anyway, I digress.

I think that Kunming does have a decent public transportation system in the works, with the new subway coming up, however, as everyone has mentioned, it's all about status when it comes to driving around in your car...even though owning a car isn't really required, since even if you go around by bus or taxi (except during rush hours, when cabs are too hard to catch) you can get by without a car; Kunming ain't Dallas or Phoenix or the USA in general. That "must show off my wealth" mentality may wear off over time (once people get used to being well off, which will take some years) and start focusing on other things like many people in more developed countries in the west have, for example people conciously switching back to riding bicycles to work even though they can afford to drive cars.

There are a few steps the government could take simultaneously to effect change within the city: make it prohibitively expensive for people to drive or park in the city, increase the number of taxis, raise car registration costs, tax car purchases heavily, build dedicated bicycle infrastructure, stimulate cycling in schools, or dedicate a car lanes on major streets to electric scooters (with the current bicycle/scooter lane becoming bicycle only).

I want to buy a car recently, but it's so hard to drive a car in kunming because traffic congestion. perhaps I need to think it again.

Automobile use is coupled with both social economics and social culture.

Kunming, like most other chinese cities benefits from the one child policy - meaning more expendable capital for those one childs. If the child marries - that's TWO sets of parents who can help the newlyweds with various expenses - ranging from the simple car to outfitting a new apartment.

CULTURE - LAZINESS & LITTERING
I've noticed a general and pervasive culture of laziness - despite the prolific presence of public trash receptacles - people still drop there trash at will - even within a few meters of public trash cans. Littering shows a cultural lack of personal and social respect and responsibility.

CULTURE - SELFISHNESS
As noted in the editor's note - Kunming drivers are incredibly selfish. I'm sure we've all witnessed the culture that LEFT turns opt through traffic. Scooters and e-bikes don't stick to the bike lanes, and pedestrians jay-walk and like to play chicken at intersections controlled by traffic lights. Right turn traffic and e-bikes will barrel on through intersections and block pedestrian crossing zones. Again, this is a pervasive and general culture that reveals both selfishness and a general disrespect for laws and order.

CULTURE - AUTOMOBILES
Autos are a culture of convenience. Convenience is somewhat tied to laziness. I don't see laziness in Kunming changing. It's not a serious public agenda (despite the wenming kunming ads).

CULTURE - GREED
Tied in with laziness is greed. Lazy people want more money for less work. This is the pervasive culture at the unskilled labor socio-economic level. I have yet to meet anyone in Kunming who is willing to consistently work a full day for a full day's wage as per their contract - contracts here are generally a waste of paper.

After a month or two - contract staff at the unskilled labor level will generally try to negotiate higher wages based on lame excuses. My favorites are "food is more expensive - can you pay me an additional ¥100 a month" - despite a 3,6,12 month contract. This is usually accompanied by a general decrease in labor output. My general retort is - yes, food IS more expensive. As we had a contract, I didn't want to say anything - but since you want to re-negotiate - we would like to REDUCE your monthly salary by ¥100 a month - you can see where that conversation's going.

Yep, you guys are probably right. The subway won't decrease car usage which is tied to status. Instead probably half of the people using electric scooters and bicycles will use it! Not exactly the target audience, damn!

I have heard that the subway will be quite expensive compared to the bus system, 12 plus rmb from the most north to the most south stops. Unlike Beijing which heavily subsidises its public transport (because it gets money from all the provinces to do so) for a flat rate of 2 rmb!! per subway trip.

At such a high price for Kunming public transport users I seriously doubt that the subway will make much of a difference,,BUT AT LEAST the construction will be gone.

yup. gotta get 12 for a subway ride. need it to pay for yunnan weddings for special people!

oops. unintended consequences, another reason to get 12 for a subway ride. clever people running the joint, next they'll up school tuition 100%.

12 rmb a ride means only laowai and people who can afford cars will ride the ditie. cool, lots a seats