By Chris Horton in Features on September 7, 2011 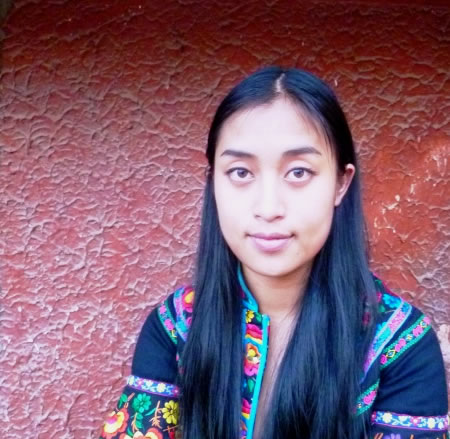 One of the more unique bands in Kunming is the rhythmic and upbeat Sigangli (司岗里), a seven-member outfit that plays modern interpretations of traditional songs of the Wa ethnic group, who live in Yunnan and northern Myanmar.

Sometimes ethereal and generally quite danceable, Sigangli's music is complemented by the soaring voice and energetic stage presence of lead singer Li Jiao (李嬌), known to her friends as A Mei (阿妹), whose singing style has more in common with the traditional music of Southeast Asia than it does with China.

After building up a small but loyal following in Kunming over the last couple of years, Sigangli is starting to land bigger gigs, such as this weekend's 500KM City Music Festival where they will have a prime 8:50 slot on Saturday night.

We met up with A Mei yesterday evening at Laowo Bar to learn more about where her and the band have come from and where they want to go:

GoKunming: How long has Sigangli been playing together?

A Mei: We started the band in Kunming in 2008, shortly after I moved here from my hometown of Ximeng [西盟, a Wa Autonomous County in southern Yunnan] but most of us have been playing together since we were kids.

GK: How would you describe Sigangli's music?

A Mei: Sigangli's music is traditional Wa ethnic music, but we've also mixed it with some elements of modern music such as reggae, funk, blues and jazz.

GK: Where does the name "Sigangli" come from?

A Mei: Sigangli comes from a Wa myth. It's the place from which all humanity originates. 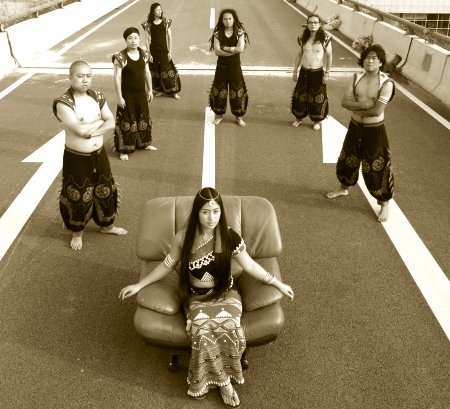 GK: How did Sigangli come into being?

A Mei: In the beginning, we were primarily playing for fun, but we eventually noticed that more and more people liked what we were doing. It was an unexpected and pleasant surprise.

GK: Is everyone in Sigangli Wa?

A Mei: Most of us are Wa. Wa in Yunnan tend to come from two places, either Ximeng or Cangyuan [沧源]. We have some differences but we do have a shared culture. We've got four Ximeng Wa in our band including myself and one from Cangyuan. We also have Han and Mongolian bandmates.

GK: In addition to Western instruments, I've seen Sigangli perform with some musical instruments I'd never seen before, are those Wa instruments?

GK: For those of us who don't speak the Wa language, can you tell us a bit about the lyrics of Sigangli songs?

A Mei: We perform all kinds of songs – songs for when you've finished building a new house, work songs that you sing when you're casting seeds in the field, drinking songs... love songs too. There's also dage (打歌), which is a song that is sung when dancing around a big fire, usually during the new year and other festivals. During the new year we dance and sing for three days and three nights.

GK: That's quite a long time, are you exhausted at the end of it?

A Mei: In the countryside I never feel very tired. Also, friends can fill in for you while you rest or have a drink.

GK: Now that you've been away from the countryside for a few years, what do you miss from back home in Ximeng?

A Mei: The food! I miss my mother's cooking! I also miss a lake near my home called Long Tan [龙潭]. I often wish I could play there with my friends. In Kunming there are no forests or lakes to play in. I of course miss all my friends and family too.

GK: Has Sigangli done any touring in the past three years?

A Mei: Not yet. I've been with Sigangli for three years, but for the first two and a half years I was also a dancer in Yunnan Impression [云南印象, a music and dance performance by famed Yunnan dancer Yang Liping] so touring was impossible. I quit six months ago and now am full time with the band.

On the 16th of this month we're going up to Beijing - we'll perform in a national competition for the Yamaha Asian Beat competition. We recently won the competition for best band in Kunming. If we win in Beijing we'll go to South Korea. If we win there, we'll be off to the Netherlands. [Laughs.]

GK: Is the band considering playing in other parts of China and Asia?

A Mei: Definitely. We really want to tour but with seven people in the band we have a lot to clear from our plates before we can all have the time to hit the road. We will be playing a gig in Guiyang soon, that should be fun. 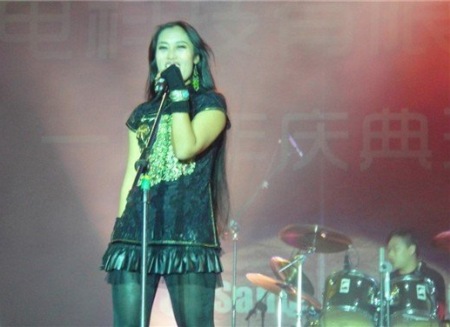 GK: What's your favorite thing about performing with Sigangli?

A Mei: I feel happy on stage. It makes me feel great when I see people having fun and dancing to our music. Our music is about being happy.

GK: Considering how unfamiliar most Kunmingers are with the Wa people, do you consider you and Sigangli to be cultural ambassadors?

A Mei: I would say so. I just hope we're good enough to adequately represent Wa people and the Wa culture.

GK: How are you feeling about performing this Saturday night at the 500KM festival?

A Mei: I'm really looking forward to it. I've never performed at a big outdoor festival before. I've seen video of big festivals in the US and other places and it looks like a lot of fun. I have danced in front of big crowds before, but singing before a large audience will be a new experience.

GK: What does Sigangli have planned for the rest of this year?

A Mei: After we get the festival and competition in Beijing behind us we're planning on recording an album.

GK: What are your hopes for the festival?

A Mei: I hope we can reach more people. Many people in Kunming have yet to see us perform. 500KM is a great opportunity to reach a wider audience than we would normally be able to.

Sigangli is scheduled to perform at the 500KM City Music Festival at the Kunming World Horticultural Expo Garden from 8:50 to 9:20. Tickets for the two-day festival are 120 yuan/day or 180 yuan for both days and can be purchased at Chapter One.

阿妹万岁! Everybody I've met from the Wa community in Kunming have been great people. Sigangli puts on a great show and if you ever get a chance to see a traditional Wa group dance performance you should definitely check it out—lots of wooden drums and a sort of primal energy that's quite entrancing.

Anybody know where to buy their cd's or download some songs?

yeah, I wanna hear some of their songs, I looked over at xiami.com for them but all I found was the song of the same name by 《黑珍珠》(which is also Wa music and awesome)