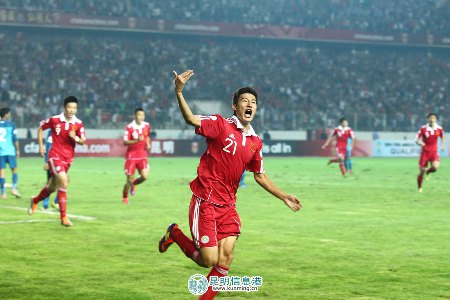 The China men's national football team took an important step toward qualifying for the 2014 World Cup Finals in Brazil with Friday's 2:1 victory over Singapore at Tuodong Stadium in Kunming.

Friday's match was China's first with new coach Jose Antonio Camacho, who had previously served as coach of Spain and Real Madrid.

Things were looking down for Camacho's squad in the first half after Singapore pulled ahead 1:0 with a goal by 41-year-old striker Aleksandar Duric in the 33rd minute.

The second half was marred by contentious calls and non-calls made by Lebanese referee Andre El Haddad, who provided China a golden opportunity to pull even when he blew the whistle on Singapore's Shaiful Eash for a controversial spot kick that Zheng Zhi (郑智) converted into China's first goal to pull things even. 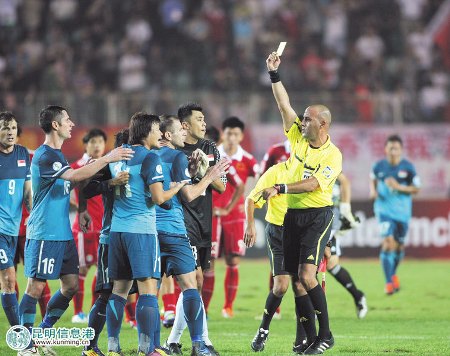 A minute later Chinese captain Li Weifeng (李伟峰) appeared to have tripped Singapore's Duric, with no call made by El Haddad. Singapore coach Radojko Avramovic, furious with El Haddad's officiating, protested vociferously and was promptly ejected from the match.

Upon returning to Singapore, it was obvious that much of the team felt that El Haddad's officiating was crucial in getting China back in the game.

"We were definitely robbed," substitute goalkeeper Lionel Lewis, who had stopped China's first penalty kick by Qu Bo (曲波), is reported to have told Singaporean media. "It was very clear-cut, you could see it was 15 against 11."

China and Jordan, who defeated Iraq on Friday, are now co-leaders of Group A of the Asian Football Confederation tournament that will eventually send representatives to Brazil in 2014.

China will play Jordan tomorrow night in Amman while Iraq will be the visiting team in Singapore. The top two teams in the four-team qualifying group will move on to the next round. Schedules for the remaining matches can be found on the AFC website.

China's men's football team has only made it to the World Cup finals once, in 2002. Given that Camacho's side had some difficulty finishing off Singapore even with home-field advantage, it would appear that should China advance it will need to be better prepared for the greater challenges that lie down the road.

Thanks for the match report Chris. Can I please ask whether you know if any of China's upcoming fixtures, such as vs Iraq on October 11, are likely to also be played at Tuodong Stadium? Thanks!

@Tim_W: As you probably noticed, the AFC website doesn't say where fixtures are scheduled to be held. I'm guessing there won't be any further matches at Tuodong Stadium, but I'm happy to be wrong. Unfortunately, events like this aren't promoted so well, and even buying tickets usually requires knowing someone - not surprising in a town that scrapped its initial plans for the Olympic torch to pass through town and then made it a VIP event out at Yunnan Minorities Village at the last minute.

As far as I know the following football matches will be in Shenzhen.

@chris and Xuacu - thanks for the info. That's a shame, it would be good to catch a game (regardless of the quality...).

Good for them, but China's national team had a crusher defeat by Brazil yesterday 7-0.