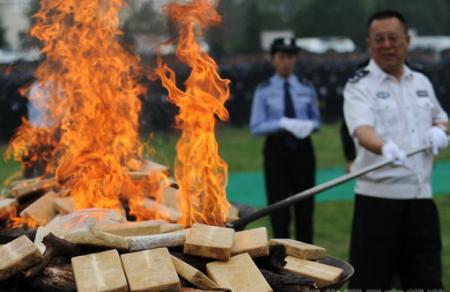 Growing economies and improved transport links are boosting commercial exchanges between Yunnan and its Southeast Asian neighbors, but not all of this cross-border trade is welcome. Chinese authorities are voicing concern about the increasingly bold methods used by international drug traffickers seeking to access China's massive black market.

June 26 was International Anti-Drug Day, a day when much of China's attention focuses on Yunnan, which is located near the Golden Triangle region that consists of portions of northern Myanmar, Laos and Thailand.

Along with Xinjiang, which borders poppy-producing Afghanistan, and Jilin, which borders North Korea, Yunnan is one of the primary regions targeted by traffickers wishing to enter China. According to official statistics, 2.5 tons of drugs and more than 60 tons of raw materials used for making illegal drugs have been seized at Yunnan's international borders since 2010.

Officials believe that more than double these amounts of drugs and raw materials are making it past border checkpoints into Yunnan, where overworked border police officers at some stations have to inspect at least 100 vehicles and 300 people daily. After entering Yunnan, the drugs may be smuggled north to Sichuan, or eastward to Guangdong and other wealthy coastal regions.

Information on the representation of different illegal drugs in Yunnan's drug seizure statistics has not been released, but it is likely that synthetic drugs - primarily methamphetamines - and opiates comprise the bulk of seizures in Yunnan.

Myanmar is far and away the largest source of illegal drugs smuggled into Yunnan, accounting for more than 80 percent of all illegal substances crossing Yunnan's international borders. The combination of quasi-independent states, high levels of corruption and large amounts of money to be made are leading to increasingly clever smuggling tactics, plus a growing risk of violence.

Rubber capsules that have a similar density to the human body and thus do not appear in X-ray scans are the latest high-tech smuggling technique putting border authorities on the defensive. Computer monitors, farm tools and even hollow rocks are also employed to get drugs over the border.

Drug traffickers are becoming emboldened to the point where they are willing to openly attack border police, he added.

"Some of them carry knives, chain saws or even guns as they pass through the checkpoints, and once the drugs are detected, they will risk their lives to attack us," he said.

The border town of Mukang (木康) in Dehong has the dubious distinction of being China's top anti-drug checkpoint, averaging more than one ton of drugs seized annually, or roughly one-tenth of the illegal drugs confiscated in China each year.

The article mentions the road connection via Dehong (meaning Ruili and that area) being the only border region with direct road access into the Golden Triangle. This is incorrect. First of all, the only road that can be used without restrictions for overland travel between the Golden Triangle and Yunnan starts in Chiang Khong on the Thai-Lao border, crosses over the Mekong to Huay Xai, Laos (soon there will be a bridge) and then via Luang nam tha to Boten/Mohanzhen on the Chinese border and finally on to Jinghong via Mengla.

Smugglers may of course use any number of unofficial routes and since much of northern Shan state is out of Myanmar government control, who knows what goes on out there. Certainly, the drugs are coming from Myanmar, and of course would generally be smuggled directly from there to China. In short, for official and legal overland travel, one must go via Laos, but unofficially (especially for drug smuggling), anything goes I guess...