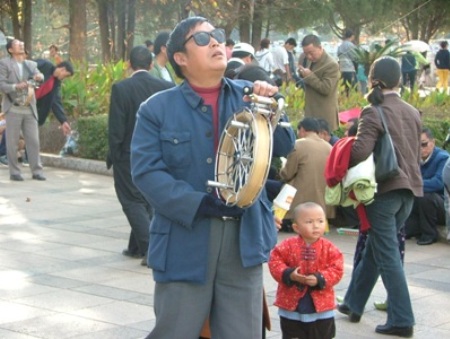 More than 778,000 Kunming residents are aged 60 or older – good news for sellers of kites and automatic majiang tables – but a growing concern for the city government, which is facing serious demographic challenges in the coming years.

Results from last year's census show that 12.1 percent of Kunming's population is at least 60 years old – a significant increase over the 9.8 percent total recorded during the previous census in 2000.

Kunming's senior citizen ratio is lower than China's national average but is the highest of Yunnan's cities. Rising living standards and a general improvement in health care in the city have enabled the city's residents to live longer than ever – last year's census recorded 109 residents aged 100 or older.

In general, the family has served as the safety net for Kunming – and China's – senior citizens. But there is an 800-pound-gorilla in the room: China's one-child policy, which was enacted in 1978.

Many of Kunming's older residents have multiple sons and daughters, who often share the responsibilities of caring for their parents. In the coming five to 10 years the parents of people born at the beginning of the one-child policy era will enter their sixties, but for the first time in the history of the Chinese family, this generation will only have one child to provide for them.

China's pension fund grew tenfold between 2000 and 2010, but it is still too early to say if it will be ready for the ramifications of the one-child policy.

If the pension system is not capable of dealing with the upcoming population strains, the burden for Chinese couples born after 1978 will be daunting to say the least: two people will have to care for up to four parents while working in an increasingly competitive job market and also potentially raising a child.

I've heard that Kunming's senior citizens are a bit miffed that their Free Bus Passes don't work on the new 2RMB buses? It does give the rest of us a chance for a seat though!

Yes. They are rude and feel entitled. No thank you most of the time when you give up your sit. I think the special buses are a good idea

As one of the few laowai, perhaps the only White one, that has an AiXin card, I gotta tell you the new 2 kuai buses were not well publicized therefore a surprise to us old folks. My young Chinese friends also didn't know of the new service.

To EnglishTeacher: Your perception of 老年人 is a little weird. On crowded buses few give up their seats. I have never, again, never saw a 老年人 get a seat without expressing thanks. Usually, when someone gives up a seat for me, it is another 老年人. Shame on you. Go back to Beijing where rudeness rules.

I do think the 2 kuai bus is a good idea. I don't mind waiting for a free bus. The one time I did pay to get on a 2 kuai bus no one gave up a seat.

Hopefully, You guys will get to be old, with aches and pains, and will endure being shoved out of the way by some healthy dude, or dudette, so he/she can sit.

Not getting a seat on a Kunming bus is a function of the large number of people that use the well run system. 老年人 are only a marginal part of the problem and the bus is the only way many 老年人 can afford to get around, free or not and with or without a seat.

I have to agree with EnglishTeacher. Whilst not every elderly person is rude and ungrateful, there are a significant number of them who appear to resent being offered a seat but who then plonk themselves down anyway. If that's the lead given on manners then there wouldn't appear to be much hope. Before I started avoiding buses altogether, I witnessed many middle / high school students giving up seats to, what appeared to be, the ungrateful 'entitled'.

In my experience in Kunming younger people often give up their seat for the elderly or mothers carrrying babies, and this is nearly always appreciated with a smile or word of thanks. An old man who looked about 80 stood up to offer me his seat today and I'm in my forties. (I wasn't sure whether to be grateful or offended!) Fortunately my stop was due, so I had a ready excuse to decline with a smile.

Not acknowledging thanks for any nice deed received is another very common behavior! Rudeness, amongst people of all ages, is common in China, i.e., cutting in line at all places and pushing & rushing into an elevator before the occupants have a chance to get out are some of the everyday occurrences.

Recently, my gf, a Kunming native, was bent completely out of shape, sobbing profusely after getting off of a bus where a group of 60ish "seniors" were fighting fiercely to board the bus and then fighting for the empty seats.

The usual explanation I've heard in different cities all over China for the rude seniors' behavior is attributed to the turbulent time while these seniors (currently on either sides of 60 years of age) were growing up. That was the period between the mid sixties & mid seventies. The good news is I have heard that certain better elementary schools in China are beginning to teaching the children manners & etiquette as part of the curriculum. Hope springs eternal...!!!