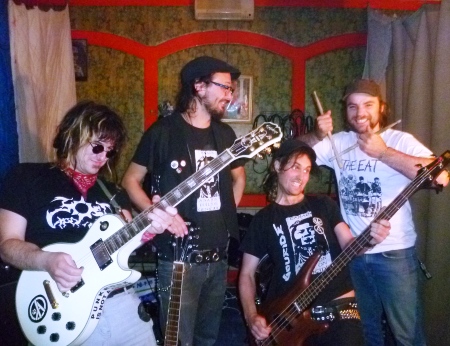 Whether shotgunning cans of beer onstage, performing in women's clothing or rocking the cock-in-a-sock look, Kunming-based punks Gouride (狗日的) have always made sure that audiences remember their shows. Onstage antics aside, over the last seven years the band's show has matured from spirited but rough-around-the-edges covers to high-energy pedal-to-the-floor original rock.

Gouride – whose name means something akin to "motherfucker" in Chinese – has not only entertained crowds large and small, it has also made immeasurable contributions to encourage a music community rather than just a scene. If you've taken a photo of a rock show in Kunming in the last several years there's a very good chance that one of the band's members is pumping his fist high in the air in the front row.

Sadly, this Friday night will be Gouride's last Kunming gig ever, due to the imminent departure of bassist Steeve Sauvageau. Due to the departure of founding drummer Ling Ling last September and his recent replacement by Sauvageau's cousin J-B, it will be the first time the band has staged a lineup made up only by natives of Alma, Quebec, which guitarists Charles and Nick describe as "a lumberjack town".

We sat down with Gouride yesterday evening at their practice room in a repurposed old KTV on Gulou Lu to learn more about how they – and Kunming's music scene – have changed over the years:

GoKunming: How did Gouride come into being?

Charles: We played our first show in 2004 at Laiya Bar, which is no longer with us. I had arrived in Kunming with Nick earlier in the year and he headed off to Heilongjiang to study.

Nick: It wasn't even Harbin, it was like northern Heilongjiang, near Russia.

Charles: So, Steeve showed up here right around the time that I realized you could get an electric guitar for something like 100 kuai. Laiya Bar had space and equipment that they would let us use basically for free too. I told Steeve and we decided to start a band.

Then I called Nick and said we're starting a punk band in Kunming...he said he'd quit school and come down here.

Nick: I was studying taichi, practicing every day. I hadn't had a drink for three months. So I moved down here to get wasted with these guys.

Charles: I asked my girlfriend at the time, who was from Kunming, if she could help us find a local drummer as motivated and inexperienced as we were, so she put us in touch with Ling Ling. We ended up learning a lot from him.

GK: How did you decide to name yourselves Gouride?

Charles: We asked Ling Ling the worst possible thing that could be said in the Kunming dialect. Later on we realized that it wasn't really Kunminghua, it was Mandarin, but maybe he said Gourine... he always loved wearing his Gouride shirt.

GK: Have you ever toured around China?

Nick: We've always had difficulty with schedules. Two of us are going to grad school and some of us play in other bands, there's always been something getting in the way of touring.

GK: Is this really your last show ever?

Nick: We're having a farewell tour to Dali, we'll play the Bad Monkey on the third and then that's it.

Charles: We all write songs and if one day in the future we're all in Quebec for a couple of months we can get together, record an album and then go our own ways again. 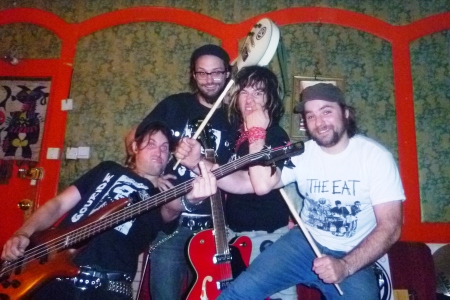 GK: Steeve, why are you leaving the band?

GK: What will you do there?

Nick: Chuck and I will stay here in Yunnan and open a mine. There's a big future in coal!

GK: What has changed in the local punk scene since you arrived in 2004?

Charles: I guess I'm what you could call disillusioned with it now, but back in the days of our first shows I felt like "Yeah! This is London '77!" After looking into it a bit more, it felt like only rich kids could do punk in Kunming.

Nick: Maybe punk doesn't touch Chinese people the way other music like hiphop or heavy metal does. We realized that people didn't want to be angry against the system, they were much happier just being consumers. We'd already done the consumer thing when we were teenagers, so we understand where they're coming from, it's just different societies.

Charles: I hear punk is a 16- to 21-year-old thing here. Once your time is up, it's time to get a job and join society, regardless of how well your band may be doing, you've gotta stop. I've seen a lot of potential in the scene here, but society pulls people out of the scene. We started here in our early 20s, now we're 29, some of us who knows how far into our thirties, but the scene has generally stayed the same age.

GK: What about the music scene here in general?

Nick: Every city in the West has a music scene... we were really looking forward to making a Yunnan scene. That's why Chuck started the outdoor music festival. We just wanted to unite the kids through music. 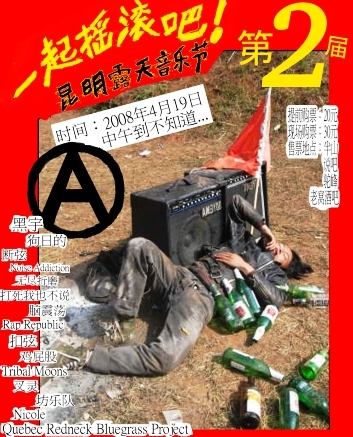 Charles: Back then we got almost 15 bands to play for free and split any money that was made amongst all the bands. There's no way that we'd be able to pull something like that off today, everyone would want to get paid.

Nick: The message of Gouride is that we don't care about money. We care about friendship.

GK: What are some of your favorite memories of the Gouride years?

Charles: The two music festivals [in 2007 and 2008] that we organized were the highlights for me... even though I don't remember too much of them. The second festival was two days long and we played both days in the slots that other bands didn't want to play. Friday was pretty good. Saturday... not as good.

The best thing about the festivals was that usually in China you get punk bands playing only with punk bands and metal bands playing with only metal bands, but we had all kinds of bands – hiphop, rock, reggae – there really was a lot of musical diversity. It was very cool.

Nick: For me the highlight was 2005 and 2006 – we were really active then and it felt like there was a crew around us. And whenever bands came down from Beijing they'd ask the Camel Bar or Sam Debell who could open for them and they'd usually say, "Play with Gouride".

I also gotta give a shout out to all of our friends that made playing in Kunming such a great experience: Pee, Mercury, Brain Concussion, No Answer, Noise Addiction and Smegma Riot.

Steeve: I loved playing Shelter Bar [the old bomb shelter that is now Counterstrike Bar] with No Answer, Brain Concussion and Noise Addiction.

J-B: I've been here a month. For me the highlight was finishing recording the last track we did this afternoon. It's fun to play with friends.

Charles: (Laughs.) He's spent all his time in China so far in the practice room!

GK: Do you have anything special planned for Friday's show?

Charles: This show is going to be very special. We're gonna be tight, which doesn't always happen. There will be costumes and a couple of scandals as usual, but really I just want to be tight.

GK: Is it easier or harder to rock when wearing women's clothing?

Nick: Much harder. I had a boner the whole time. Girls come and touch you... I don't know why.

Charles: And always with the cameras between the legs to see if we're wearing underwear. By the way, I want to make one thing crystal clear: we're not men dressing like women, we're men wearing dresses!

I' m please to see a good gang having fun and pursue their goals.

See y'all there tonight!