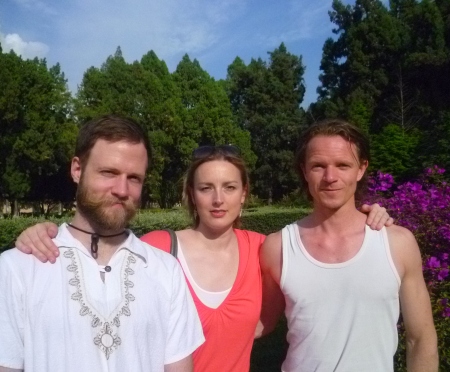 For years Shanghai and Beijing have been able to attract international musicians, but most performers who have played the coast are only just beginning to explore the country's vast music-deprived interior to perform in lesser-known cities such as our beloved Kunming.

Eeg and Templeton, who have both come to China several times to perform in Shanghai, have been looking forward to playing in Yunnan for years, primarily due to Whitcomb's longing to return to Kunming, where he studied Chinese for one very happy semester at Yunnan University in 2000. Afterward, he moved to Shanghai where for years he was a crucial fixture in the local jazz scene.

We hung out with the three musicians at the Yunnan University campus on a sunny Tuesday afternoon and discussed the life of a jazz band touring in China:

GoKunming: Sinne and Janus, how long have you been coming to China to perform?

Sinne Eeg: We first played in China in 2004 in Shanghai at a gig at House of Blues and Jazz. Janus and I began performing together not too long before that show. That's when we met JQ, who would sit in with us. Every time we went to Shanghai afterward, we would play together. JQ's been to Denmark to perform with us too.

Janus Templeton: We just like each other. It's nice to be on tour with cool people that you get along with.

JQ Whitcomb: Musically we jive and we're all easygoing personalities.

Eeg: It feels good when we're back in Denmark to feel like we have family here in China.

GK: Where are you playing on this tour?

Templeton: This time around is our biggest China tour so far, all told we'll play Shanghai, Beijing, Chongqing, Chengdu, Kunming, Shuhe and Guiyang.

Whitcomb: I've been telling them about Yunnan for years, hoping we'd be able to make it out here to play.

Eeg: Last year we played during the World Expo in Shanghai but we also played in Chongqing, Wuhan and Wuxi, which was my first time getting off of the coast.

GK: How do Chinese audiences react to your music?

Templeton: The reactions have been very good.

Eeg: I find that the Chinese reaction is often better than what we get from foreigners. Young Chinese don't think so much about what style of jazz they're listening to, it seems that for many people in our audience they look at it simply as music.

Whitcomb: Anyone can appreciate the kind of jazz we play, it's pretty accessible. A lot of jazz musicians feel the need to prove how insane they are, but if you play straight-ahead no-frills jazz, more people can appreciate it – and that's what we do.

GK: What's been the most memorable part of this tour so far?

Eeg: (Laughs.) Well, we were arrested in Chongqing for playing at a venue that hadn't secured a permit for our show.

GK: You were arrested? For playing unlicensed jazz?

Eeg: I wasn't too scared, I figured it would work out... I didn't enjoy it, but at times I did find it amusing.

It happened around 11:15, after our show. After about five hours in the police station our guitarist Lawrence started playing around on his guitar. Then JQ joined him on trumpet, using his mute. Eventually we had a full-on jam session. We played "I Shot The Sheriff" and then "Sweet Dreams" by Eurythmics. (Laughs.) Then one of the policemen requested "Hotel California".

Templeton: The feeling when the guitar started up was great, the fatigue that I'd been feeling lifted and I got sucked into the vibe of the moment. It was kind of like being high.

Eeg: We were fingerprinted and fined 1,000 yuan, and all the money we'd made at the door was confiscated. But we got these wonderful certificates declaring that we admitted our guilt. We got to put our fingerprints on it, it was cool.

GK: Where was the gig?

Eeg: Nuts Club. We loved playing for the young kids there, but I think the police scared them a bit.

I went outside to cool down with a beer and was approached by a plainclothes policeman. He said hi and I thought he just wanted a photo with me, but then he showed me his police ID card and I was worried that I wasn't allowed to drink beer outside. (Laughs.)

Whitcomb: We want to play music as many places as possible, but unfortunately the amount of red tape involved can get in the way and limit our options for venues.

GK: Arrests aside, what are your favorite things about playing in China?

Eeg: I think people here get into what we do, and that feels good. I don't think many people can frequently experience live jazz here... people might know a few songs we play but we have a lot of our own original music, which they've probably never heard.

GK: JQ, how does it feel to come back to Yunnan to perform?

Whitcomb: I love coming to Yunnan for any reason, it's my favorite place in China. Playing music in Yunnan is ideal for me because I get to perform but I can also travel and chill out. I feel a kinship with Yunnan... for me it's more like home than anywhere else in China. It's so much more mellow.

GK: What should people expect at your show this Friday?

Whitcomb: It'll be a little different from other stops on this tour because we'll have a piano player joining us.

Eeg: I always try to tell stories with my performances, using my own compositions as well as some lesser-known standards. I want people to feel what I'm trying to convey, and I feel that even with the potential language barrier, a lot of people here get it.

Also, we want our shows to be fun for us – if we're enjoying ourselves, the audience usually gets into it too.

Sinne Eeg will perform at TCG Nordica this Friday night at 8pm, entry is 35 yuan at the door, and advance tickets are available for 30 yuan at 1895 Movie Bar, Wheatfield Bookstore or Sanlou Bar.

I went to the concert last night. The beginning was a bit rocky with a less than perfect sound system at fault, but things quickly improved and as a whole concert was fantastic. Sinne's voice is powerful yet sweet, JQ's trumpet and bass (and his Chinese intros) along with Janus' drumming and bass were perfect accompaniment for her voice. The pianist who joined them for the concert (I did not catch his name) was extremely skilled and added a lot to the overall performance.

Great show all around... one of the highlights for me was during the aforementioned sound problems, when Sinne decided to finish the second song (I think) without the microphone and nailed it. Janus, JQ and Martin were all in top form too. JQ mentioned that they might pass through Kunming again in half a year or so, I'm sure they'd pack the house again.

Hey, we sure enjoyed playing last night. What a fantastic audience and venue! It's definitely been a highlight of this tour. And it felt great not to get arrested after the show! Thanks Kunming, we'll be back as soon as possible. Oh- and come up to Lijiang for the Shuhe show tomorrow if you can, it's at Petit Paris.