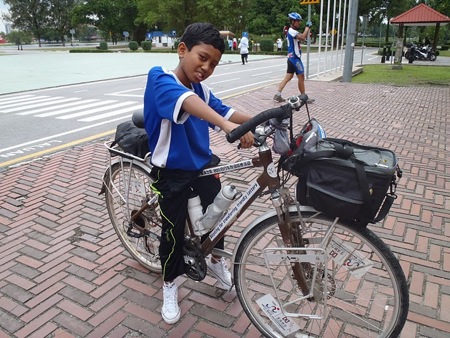 Leaving Kuala Lumpur wasn't as bad as entering it, but it was definitely no simple task. At times you have no choice but to hop on the expressway (E7); just follow the signs for motorcycles. 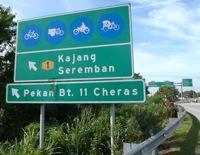 After about 30km you can get off the expressway and onto Route 1, which takes you to Seremban (70km). There are plenty of stops for lunch, including a famous chicken and rice place, and a huge Chinese high school here that was very welcoming to us. From Seremban, it is another 30km to the town of Port Dickson by taking Route 53 to the coast. 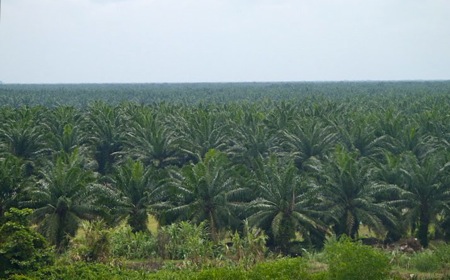 Palm plantation on the way to Port Dickson

Unfortunately there were barely any places to stay in town, and outside the city it is all overpriced resorts. One option about 5km south of the city is the Rotary Club Youth Hostel, which has basic rooms for only RM10 (US$3.3). The only other option we found was staying at the Port Dickson Golf and Country Club. We ended up staying there and the rooms were actually very reasonably priced and the service was wonderful. 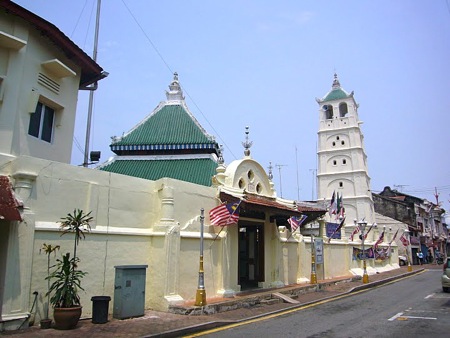 A Melaka mosque with Daoist influences

From our hotel it was an easy ride to Melaka – also spelled Malacca in English. We tried to stay on small roads close to the ocean as much as possible during the day, allowing us to mostly avoid the busier Route 5. The roads are wonderful, but there is no shoulder, so be careful of cars.

The final 20km we had to hop back on Route 5, which we followed over the bridge and smack into the middle of the small city of Melaka. In Melaka we stayed at the pleasant, affordable, and very hospitable Lyza Inn for two nights. 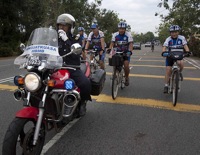 On the second day we were escorted by three police officers on motorcycles about 10km outside of Melaka to city hall, where the mayor, Zainal Abu, had organized a stunning welcoming.

Over 30 officials and government staff members welcomed us to an elaborate breakfast, and both the mayor and Jin Feibao addressed everyone. 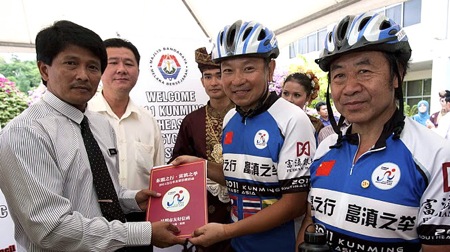 After the ceremony, the mayor tried out one of our bikes for a bit and then sent us off on our way. We spent the rest of our time enjoying Melaka's historical scenery and delicious specialty foods. 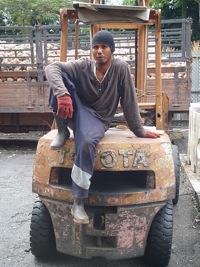 At a pineapple juice factory near Batu Pahat

From Melaka we said goodbye to our friends at the Lyza Inn and cycled fast and steady to Muar (40km). Don't miss the giant rickshaw at the Johor State boundary.

It's a bit tricky to navigate through Muar. We were luckily enough to meet a local cyclist who took us through and brought us to a really nice "bistro" for lunch. It's another 60 kilometers from here to Batu Pahat, with plenty of stands on the side of the road selling fresh coconuts, watermelons, guavas and, if you're brave, durians. In Batu Pahat we were met on arrival by head of the board of Huaren High School (华仁中学), who led us to the school where they were waiting for us with a very special welcoming ceremony – complete with bass drumming, dancing and Chinese yo-yo tossing. We stayed the night on the school's campus and gave a presentation to the students, who overwhelmed us with questions. Signing shirts at a high school near Pontian Kechil

The first 70km along Route 5 were very pleasant, traveling through some beautiful areas. We stopped just before Pontian Kechil at another Chinese school where we shared lunch and our experiences with the students.

From Pontian Kechil it's another 60km to Johor Bahru, and not so pleasant. Traffic gets heavier and heavier and there is no lane or much of a shoulder for cyclists. We are staying right next to the Singapore border checkpoint at the Lions Hotel. Tomorrow we will enter Singapore and cycle 30 more kilometers to our guesthouse, where we will complete our more-than-6000-kilometer, 70-day journey, Cycling Southeast Asia: Messengers of Friendship.

We are a bunch of regular cyclist in Singapore and had recently participated in the OCBC Cycle Singapoe early March 2011.

We hope to meet up with you and maybe invite you to join our regular Sunday morning ride along the East Coast while you are in Singapore.