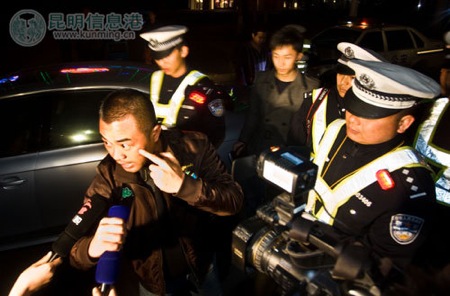 The silver Audi's driver sat expressionless at a traffic checkpoint in Kunming's Chenggong new district last night, staring forward into space. It took police officers six requests to rouse him into turning off the engine and getting out of the car.

Upon emerging, he noticed the journalists and cameramen who were at the checkpoint to report on a police road safety initiative. "Whoa, look at all these reporters," said the driver, according to an article today on the Kunming Information Hub website.

"Everybody's looking at my red face," he continued. "Wanna know why it's so red? It's because I'm drunk!"

Reporters would later learn from police that the man, surnamed Ding, is a registered resident of Jinhua in Zhejiang province. His driver's license had already suspended by Jinhua authorities for drunk driving. He also had previously been jailed for drunk driving for an unreported length of time. 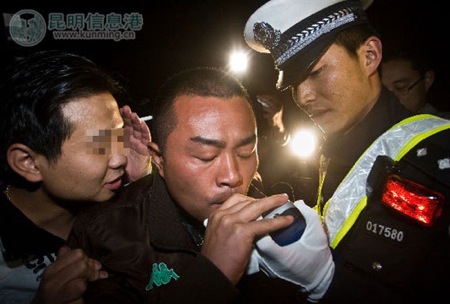 After Ding exited the car, police administered a breathalyzer test that indicated his blood alcohol concentration to be 103.3 milligrams per deciliter (equivalent to an American "blood alcohol percentage" of 0.1033 percent). That placed Ding's alcohol level almost 30 percent above the 80-milligrams-per-deciliter threshold for drunk driving in China. 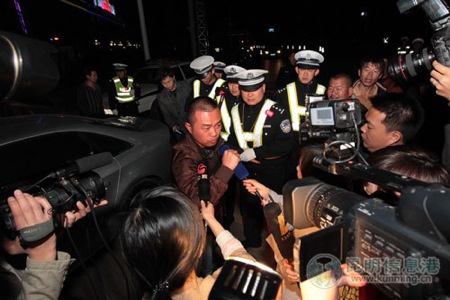 After his breathalyzer test, Ding faced reporters' cameras and struck a body-building pose, asking, "do you need more footage? I'll give it to you, but remember to let me have a look tomorrow!"

Ding's behavior led the Kunming Information Hub reporter to dub him "Kunming's most arrogant and clamorous drunk driver," (昆明现最嚣张的醉驾司机) in the headline of the news story reporting the incident.

China has long struggled to conrol drunk driving, and even announced new regulations in 2009 under which drivers with a blood alcohol concentration of between 20 and 80 milligrams per deciliter can be punished for 'driving after drinking alcohol' (酒后驾驶) – a less severe infringement than driving while drunk. But drunk driving remains a problem in China.

There was no word on Ding's potential legal fate.

Mr. Ding is likely untouchable... I wonder how involved this Zhejiang guy is in the Chenggong real estate boom?