Insect cuisine: Bugging out in Kunming 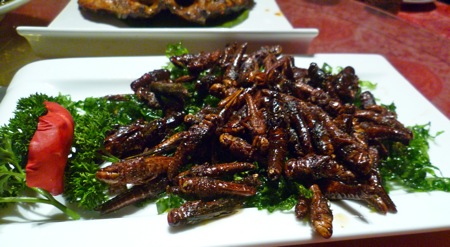 What if we could save the planet by eating more insects? It's a question that has the attention of economists and environmentalists alike.

The world's livestock industry consumes more grain and water than any other industry. Just to raise one kilogram of beef uses nearly 13,000 liters of water. Moreover, the world's livestock taken as a whole is responsible for more greenhouse gas emissions than automobiles and all other forms of transportation combined. Some insects, on the other hand, pack about three times as much protein as beef per serving and require only one-sixth the amount of grain to raise.

In many parts of the world, insect consumption is not such a far-fetched idea. In fact, 80 percent of the world's population puts insects on the menu from time to time. In Yunnan, insects are an essential part of many rural diets; and even in Kunming, insects are served as pricey delicacies in minority-themed restaurants. A friend and I recently searched out these restaurants as we committed to a week of eating insects as our main course. 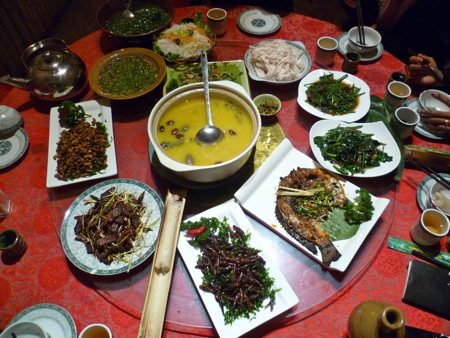 We started our tour at Aini Fanzhuang, a restaurant that serves up culinary specialties of the Aini ethnic group. Our table was decorated with plates that included steamed chicken soup, lemongrass dried beef and assorted wild greens; but at the heart of it all was a plate of large grasshoppers (蚂蚱). They were deep-fried, which gave the insects a shiny bronze color. It was the first time that either of us had eaten grasshoppers so we were both a bit timid with our first bite. After an initial crunch, the meat revealed a flavor akin to molasses and an agreeable texture. We voraciously washed down each bite with a swig of homemade purple rice wine.

3236Mangshi Daiwei# http://www.gokunming.com/en/listings/item/man_202/#. There we feasted upon bitter rice noodles, medicinal herbal soup with pork balls, cold tamarillo salad and, of course, fried bamboo grubs (竹虫). Bamboo grubs are the most widely consumed insects in Yunnan. For the inexperienced insect eater, their maggot-like appearance is rather unsettling. They are like a greasy snack that every once in a while packs an unpleasant creamy center. But these were small enough that we were still able to clear the plate. 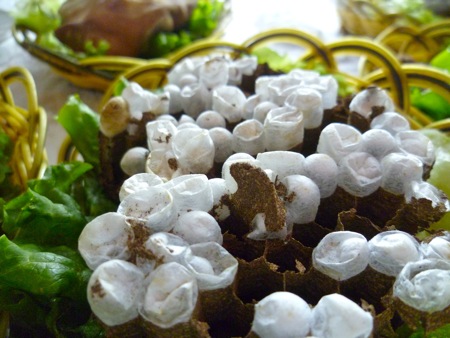 Wasp larvae in the cone

When dining at Lahu Jiu Jia, a Lahu minority restaurant run by a lovely old woman from Lancang, be prepared for spicy foods. Chun pinpan (椿拼盘) is a dish quartered into four parts with four distinctly different flavors. These include a pungent herb called zhuergen (猪耳根), seasoned potato mash, shredded dried beef and a red chili salad that would blow the socks off of even the most diehard chili fanatic. Between bouts of spicy panic we indulged ourselves with homemade corn liquor and a plate full of wasp larvae (蜂蛹). The larvae are removed from the nest's comb just before maturation and fried with simple seasoning. Though wasps are not honey producers, they do have a pleasant sweet flavor. 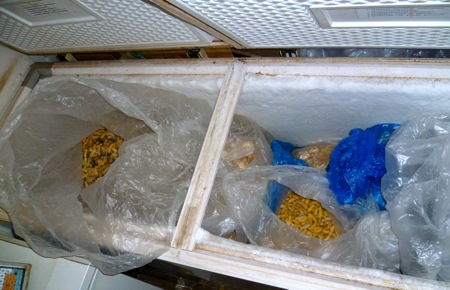 Just when it started to appear that Kunming's insect selection was limited to grasshoppers, bamboo grubs and wasp larvae, a local friend took an interest in our experiment and opened the door to much more. First he took us to the Mushuihua Market across from the International Convention and Exhibition Center. There we were able to procure hornet larvae (大蜂蛹), an expensive delicacy with a stunning golden color, and giant moth larvae (大柴虫), an insect the size and shape of a typical cigar. 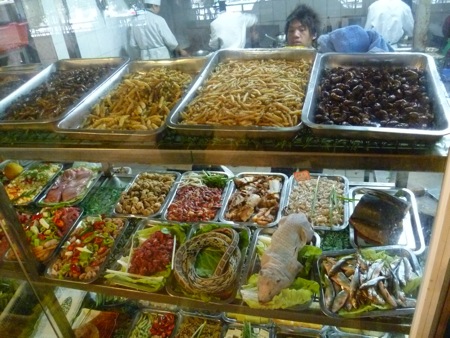 Some of the offerings at Simao Yecai Guan

After stashing the new acquisitions in the freezer, we stopped for lunch at Simao Yecai Guan. A combination of wild meats and vegetables prepared according to Hani and Wa minority traditions makes Simao Yecai Guan one of Kunming's most interesting restaurants. 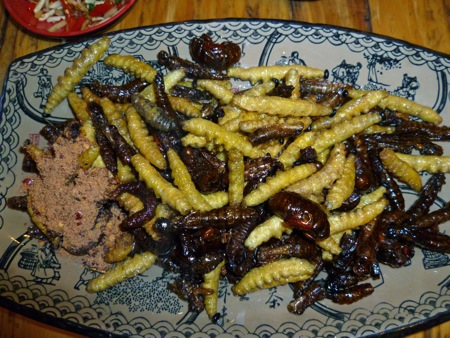 From left, a dragonfly, cicada and bamboo flower grub

Dragonflies have a pungent flavor that might appeal to those who appreciate the taste of dried fish, banana flower grubs are like giant versions of bamboo grubs with even more creamy filling to beguile the senses, and cicadas were surprisingly lovely with their giant size and rough texture. 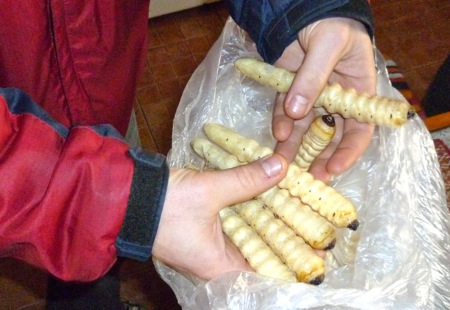 Bored with eating deep-fried insects, we decided to roast the hornet and moth larvae ourselves. We placed them on a pan in the toaster oven with some olive oil for about 20 minutes. The hornet larvae turned out slightly sweet, very pleasant and easy to eat. The cigar-shaped moth larvae, however, were each larger than a mouthful and therefore quite daunting to nibble on. When we finally built up the courage to bite through the insects' thick skin, our mouths were smothered with a flavor and texture similar to smoky cream cheese. Though actually quite tasty, none of us were eager to reach for a second helping. 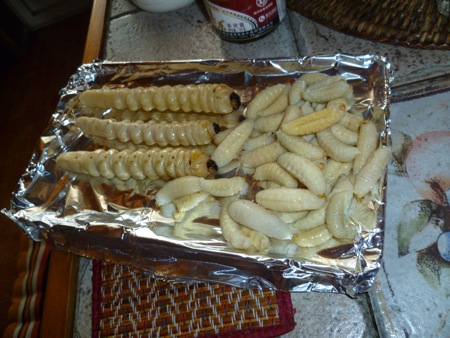 Baked moth larvae and fried cicadas might not make it onto many western menus, but insects may find their way to the western palate nonetheless. The world's annual meat consumption is predicted to double between the years 2000 and 2050; and with roughly 70 percent of the world's agricultural land already dedicated to the livestock industry, meat prices are expected to soar. So could insects be a viable alternative to meat? We're in no rush to make the switch; but if the time comes, we'll have our toasters ready.

In season, dragon fly cooked correctly is a really tasty dish. Come the crunch I doubt it would take much coaxing to make these acceptable to the western palate.

Bravehearts. Brave stomaches. Great write-up. Funny to think that I gave my Chinese uncle a mozzarella stick to try back in the day and he nearly puked it out. If I was that hungry, I would most likely go there....

What was the item to the right of the snake at Simao Yecai Guan?!

A worthy topic for Simple Mathematics would be to determine how many giant moth larvae one could eat before dying from them.

Colin Flahive, you're a brave man. I spent a few years in Simao (Pu'er) so had plenty of opportunity to try the odd plate of insects (zhu chong, mainly) at banquets. Dragonfly nymphs were another one we tentatively savoured. I never actually considered shopping for them and cooking them myself though! Hunting cicadas is fun though. A friend who lived in Jiangcheng (E of Simao) once spent a happy evening out in the jungle with torches and nets catching them for his dinner. Great post, loved it.

Bye the way, what's happened to Guo Duomi and the Yunnan Recipes? After a tantalising dozen, the run stopped on 2009-07-07 with Stirfried Baihe. I'm sure I'm not the only reader who's missing them...
Alastair Matthewson

Guo Duomi had career obligations outside of Kunming. We also miss his wonderful contributions.

@ Christine. The dish to the right of the snake is a bamboo rat. We didn't get that dish, but my wife has said that they are delicious.

Nice article. I wish I had the courage to try this stuff out. Maybe after a bottle of baijiu or two. Second the Yunnan recipes. Some of those dishes became my favourite Chinese foods and I'd love to get more ideas. Maybe GoKunming could find another local who's into the Yunnan kitchen who could pick up the torch?

I had some Bamboo rat on a trip down to Banna over the holiday. It made a delicious broth, though I reckon they'd caught a racing rat because there wasn't much meat to speak of.

My nomination for best GoKunming article ever (and there have been many good ones). The only way to top this, possibly, is if Chris Horton now goes in search of his own invertebrate comestibles and gives us the blow-by-blow account of someone from Kansas rather than Colorado. Is Chris up to it?
I plan on sending a link to Colin's article to everyone I know who's visited Kunming in hopes this will induce a return visit. I look forward to insect hopping, as it were, myself when I get back.
For those who wish to plunge deeper into this whole subject I recommend Andrew Zimmern's Travel Channel show, Bizarre Foods. With time this has morphed into a more mainstream travel show, but there are DVDs from the first season where he spent the whole show eating spiders, praying mantis, and testicles and smiling, just like Rachel Ray, into the camera after each bite, "Delicious!" www.travelchannel.com/TV_Shows/Bizarre_Foods

In southern Yunnan (I found this in Honghezhou) they also tend to sell a roadside snack that consists of an empty honey comb with living bee larvae inside. A friend of mine bought a piece and tried a few, but it was too much for me. I'm okay with eating insects but not when they are alive.

oh geez, the descriptions of the "creamy" fillings. oh geez. i kind of regret reading that.

Good article with great pictures. Keep up the good work!

is that some kind of Asian eating fantasies to have palettes for bugs? Thais do it too and i'm sure Chinese and Thais are not the only ones out there...

OMG!It is so add to hear of insects eating! I have browsed online. Here one more article to supplement your story: species.com/content/waxworm-tacos

OMG Look at the size of the moth larvae!!! I wanna kill myself!