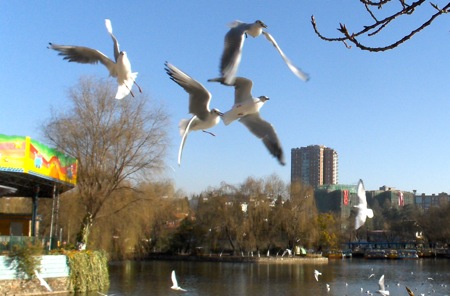 China's Spring Festival holiday has traditionally been a time to spend at home with family members. But with rising affluence and few other chances for time off work, more and more Chinese have been choosing in recent years to spend the holiday traveling—a trend from which Yunnan stands to benefit in a few different ways.

The most obvious channel for Yunnan to benefit is domestic tourism, which still makes up the bulk of Spring Festival travel—for example to Luoping county, Lijiang or Tengchong. But there are also tourists who may stop in Yunnan before continuing on to other countries, particularly destinations in Southeast Asian nations such as Myanmar, Laos, Cambodia, Thailand and Malaysia.

China's National Tourism Administration reported this year that there was a 30 percent increase in tours headed to foreign countries during the Spring Festival holiday, referred to in Chinese as the "Spring Festival Golden Week" 春节黄金周. Furthermore, half of the most popular foreign destinations for Golden Week travelers were in Southeast Asia, according to Xinhua news agency.

While many of these tourists fly directly to their Southeast Asian destinations, there is also some evidence that Yunnan is benefiting as a launching-off point for explorations of Southeast Asia by Chinese travelers.

This is especially true as rising automobile ownership allows more Chinese to go on car tours, and as a new generation of young backpackers strap on their bags and cameras to go exploring. A young male backpacker surnamed Yang told the Spring City Evening Post at the Mohan border crossing in Yunnan's Xishuangbanna region that he and his wife were drawn by the convenience of overland travel from Kunming to Luang Prabang, Laos.

He also cited the low prices in Laos as a factor in his decision to travel there. Low prices could continue to draw more Chinese tourists to Southeast Asia in coming years as China faces large inflationary pressures and its currency potentially appreciates against the US dollar—which is commonly used in Myanmar, Laos, Vietnam and Cambodia—as well as against other currencies like Thailand's baht or Malaysia's ringgit.

The border crossing from Yunnan's Hekou into Lao Cai, Vietnam was presented by Kunming Daily as an example of flourishing tourism from Yunnan to Southeast Asia. Nearly 20,000 Chinese tourists crossed the border during Golden Week this year, an annual increase of 47 percent.

Yunnan is not the only administrative region that appears to be benefiting from increased Chinese tourism to Southeast Asia. Officials at the Pingxiang border crossing to Vietnam in neighboring Guangxi reported that the number of Chinese tourists entering Vietnam during the Spring Festival holiday had increased by 15 to 20 percent this year.

Whether or not Yunnan will ultimately reap tourist dollars from its proximity to Southeast Asia, it also seems to be doing fine on its own. This year's Golden Week was a record one for tourism in Yunnan: the province reportedly had more than 6 million visitors and earned more than 2.8 billion yuan (US$424 million) from tourism.