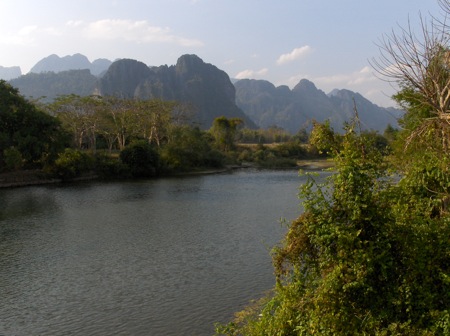 With Chinese cash in hand, the tiny nation of Laos is planning on starting construction in April of a 481-kilometer, US$7-billion rail line running from Yunnan's Xishuangbanna prefecture, through the the Lao capital, Vientiane and across the Thai border to Nong Khai, according to media reports.

Not only does the impending construction of the 200km/h "medium high-speed" railway cast uncertainty on plans to create a circuitous rail link from Kunming to Bangkok via Vietnam and Cambodia, it is also a powerful symbol of Southeast Asia's growing economic and political ties with China.

But pulling Laos and other nations toward its orbit isn't coming cheap for the Chinese government: Laos will foot only 30 percent of the bill for the rail project. China will also be providing support to the government of Thailand for a new 850km high-speed link between Nong Khai and Bangkok that the two countries are currently negotiating.

Combined with a rail line that is already under construction from Kunming to the Laos border crossing at Mohan, the Laos and Thai lines will complete a rail link from China to Singapore that has long been on Beijing's wish list.

The Lao government's announcement late last year that it would fast-track planning and impact assessment and start construction in April has led some to question whether China will continue with plans to repair and upgrade tracks in Cambodia and create a high speed link to Bangkok through Vietnam and Cambodia.

That more eastern route would be the cheapest way to create a link, according to Asian Development Bank estimates. Those estimates also state that, if built, the line would carry 26 million tons of freight annually by 2025.

The more expensive but more direct new railway to be constructed in mountainous Laos will reportedly have 190km of tunnels and numerous bridges.

Good relation between the both countries.

The "the tiny nation of Laos" happens to have a land area approximately equal to that of Great Britain!

This project appears to have stalled due to a number of factors possibly including corruption scandals, funding issues and of course the crash last year near Wenzhou. However, I do believe (and hope) that it will eventually go ahead though it won't be finished in only 3 more years as was originally forecast, but probably more like 10 or even 15 years. Whenever it is finished, it will create lots of jobs and a fast connection from South-East Asia (Singapore, Bangkok, Vientiane etc.) to Kunming and beyond in China. Therefore, it will become a viable relatively environmentally friendly alternative to air travel, something I am looking forward to.

Another thing I forgot to mention: Toll Holdings, an Australian company is involved with the upgrading of the Cambodian railway line from Phnom Penh to Sisophon and the Thai border at Poipet. Much of that line has already been rehabilitated but not yet opened (apparently in 2-3 years the line is expected to open). However, a high speed railway line it isn't, but probably reasonable speeds can be expected (at least 80km/h, possibly even 100-120 max.) is likely and that will be quite adequate for a country where few people could afford high speed rail anyway.

Also, Bangkok to Nong Khai is about 620km by road and similar by rail. 850km is way off - indeed this is roughly the distance by road from Bangkok all the way to Chiang Khong (opposite Huay Xai, Laos) in the far north of Thailand and the northern most crossing between the two countries (apart from Chiang Saen, which is used for boat journeys between Jinghong and Thailand).