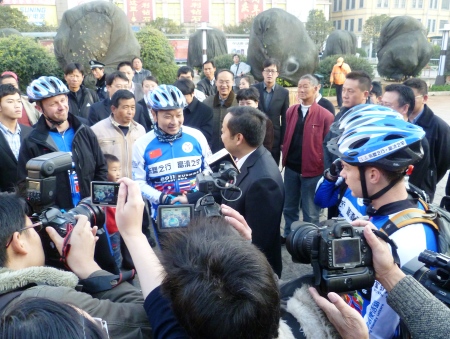 Early Sunday morning a group of seven cyclists pedaled out of Kunming's Jinma Biji Square with a simple task: to deliver letters of peace and friendship from Kunming Mayor Zhang Zulin (张祖林) to mayors of cities throughout Southeast Asia.

The three-month bicycle journey was organized by Kunming native Jin Feibao, China's most famous explorer. Jin and six travel companions will spend the next three months cycling through Southeast Asia, averaging 100 kilometers (62 miles) on the road each day.

Jin has summited the highest mountain on every continent and journeyed to both poles as well as trekked across Greenland and the Sahara Desert. He has also walked the length of the railway that once linked Kunming to Hanoi and has recently been running marathons and preparing for space travel.

As of yesterday it appeared unlikely that the group would be allowed into Vietnam. The group's two foreign members, American Jesse Millett (proxy required) and David Hiebaum of Austria, will not accompany the group during its 10 days in Myanmar due to visa issues.

After a brief ceremony including some words from Mayor Zhang, the group set off for the west side of Dianchi Lake, making its first stop in Haikou County for lunch. GoKunming rode along with group to Haikou, during which time Jin disclosed that ten years had passed since he last rode a bicycle. 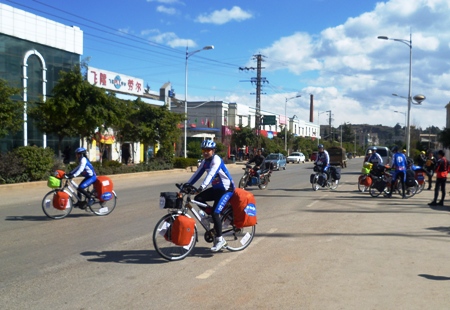 After lunch, the group headed for Yuxi, which they reached in early evening after a day of riding into a strong headwind and getting rained on in the last leg of the journey. The cyclists will continue southward through Yunnan over the coming week, passing through the cities of Yuanjiang, Mojiang, Pu'er, Jinghong and Mengla before leaving China via the border crossing at Mohan and entering Laos.

Dan, my online translator says you are encouraging JinFeiBao to "refuel". Surely that would be cheating??