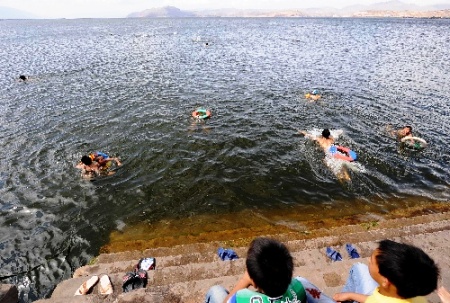 The Dali government is claiming major gains in its efforts to clean up Erhai Lake, the second-largest lake in Yunnan, according to a Xinhua report.

Monitoring of Erhai Lake during the first nine months of this year has reportedly shown that the lake has reached an overall water quality level of Class II, the second-best water quality rating.

In 1996 and 2003 Erhai Lake experienced two large-scale blue algae blooms, which combined with industrial and agricultural pollution to reduce the lake's water quality to Class IV.

Since 2003 the Dali government has spent more than 2 billion yuan (US$299 million) to improve Erhai Lake's water quality, with a focus on reducing the amount of pollution entering the lake.

If government assessments of Erhai Lake's water quality are accurate, it would make the lake the only success story among Yunnan's nine major lakes in recent years.

Dianchi Lake near Kunming has suffered from severe pollution and eutrophication – which eventually removes oxygen from a body of water and leads to the destruction of all animal life – since the mid 1980s and is still rated Class V. Class V water is considered unfit for human or industrial use.

Yangzonghai Lake is still recovering from heavy arsenic contamination and Qilu Lake, Xingyun Lake and Yilong Lake were cited in a 2009 report as not being "environmentally functional".

Glad to see such reportage, which gives us access to a variety of opinion and fact. This is what I expect out of GoKunming!