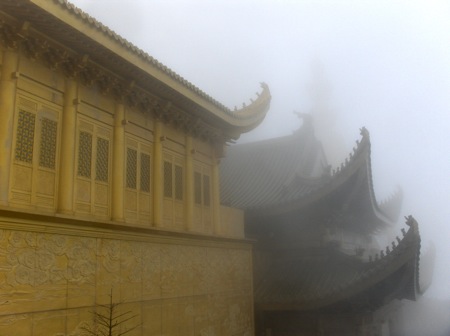 When judging the mountains they've visited, many travelers rely on one yardstick: the quality of the views from the top.

By this measurement, lush Emeishan (峨眉山) in southern Sichuan falls flat. Not for lack of vistas, but rather because they are hidden by near-perpetual clouds and fog. Few visitors enjoy a clear day there, and during a recent day's hike there, we were no exception. 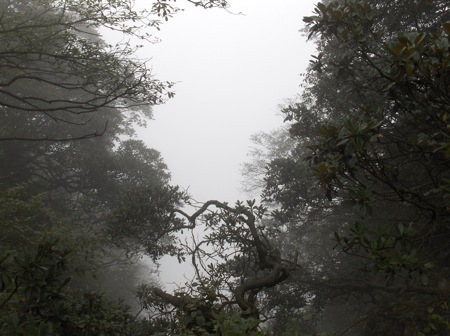 But judging a mountain by what one can see from it doesn't seem very fair to the mountain itself. We found a lot to like about Emeishan: diverse flora, dilapidated monasteries, occasional monkeys and a killer workout. 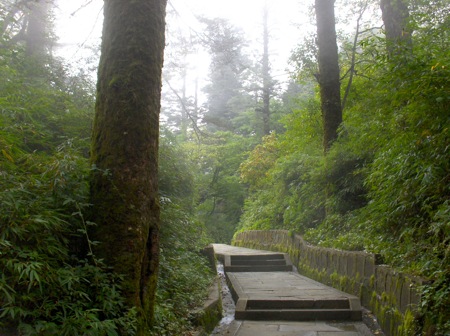 Emeishan is blanketed by a rich diversity of vegetation. One out of every 10 plant species from across all of China—more than 3,200 different kinds—exists on the slopes of this one mountain.

Emeishan also occupies an important position in Chinese Buddhism. It is one of China's four sacred Buddhist mountains, along with Wutaishan in Shanxi, Putuoshan in Zhejiang, and Jiuhuashan in Anhui.

Emeishan's mythical roots go back the year CE 63 during the Eastern Han dynasty when a man named Pu is said to have followed a deer to the top of the mountain.

At the peak the deer vanished without a trace and Pu met a monk who told him that the deer must have been an incarnation of the Bodhisattva Samantabhadra. This revelation inspired Pu to move out of his house and begin living as a monk on Emeishan, launching its transformation into a Buddhist holy site. 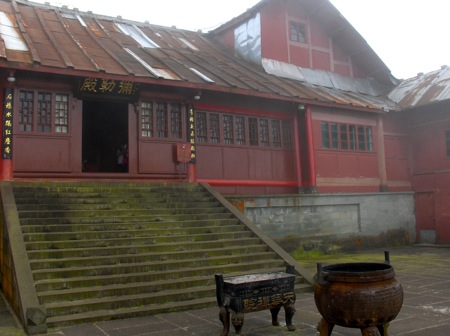 A monastery on the mountain.

This longstanding and prominent place in Chinese Buddhism has endowed Emeishan with large numbers of moldering alpine monasteries and a network of scores of kilometers of stone staircases running from the base to its several peaks.

Today Emeishan is among the best known tourist sites in China and large crowds descend on it daily, experiencing it mostly by bus and cable car. But it is easy to leave the crowds behind for the solace of nature while hiking on the staircases.

The classic Emeishan experience is to see the abundance of plant life—along with occasional mischievous Tibetan macaques—during a multi-day hike to the top with overnight stays at the spartan accommodation offered by most of the monasteries. 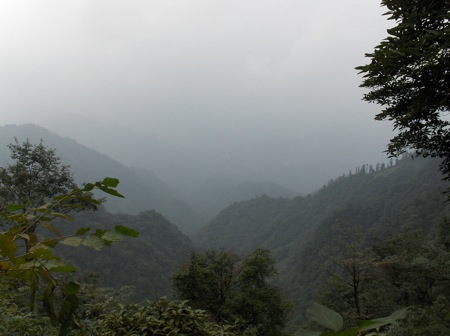 The mist and clouds are less heavy on the lower slopes.

Making the pilgrimage
Emeishan the mountain is accessed from Eshan Village ((峨山镇) located about 5 kilometers southwest of the city of Emeishan (峨眉山市) in Leshan prefecture. The area in Eshan Village near the entrance to the mountain scenic area is also sometimes called Baoguo Si (报国寺), in reference to the nearby monastery at the foot of the mountain just inside the scenic area.

Travelers coming by bus from Chengdu or Leshan may be lucky enough to end up at the Mt. Emei Tourist Transportation Center located in Eshan Village. Others will arrive at the main bus or train stations in Emeishan City. They are across the street from each other, about a 15 to 20 yuan taxi ride from Eshan Village.

Eshan Village has two hostels that primarily target the foreign backpacker market: Teddy Bear Hotel and Emeishan Youth Hostel. Both offer food, drinks and accommodation ranging from 30 yuan for a dormitory bed to more than 200 yuan for well-appointed private rooms.

Teddy Bear is the older and more well-known of the two, but the novelty of being helpful seems to have worn off for the owners. The main selling point of both hostels is an English-speaking staff, and for visitors with Chinese or miming skills there are a multitude of other establishments along Eshan Village's main road that offer better value for food and lodging.

It's a good idea to bring sufficient cash to get in and out of Emeishan. If you find yourself short on funds, there are two ATMs in the village, but the China Construction Bank ATM located next to the entrance to the Mt. Emei Tourist Transportation Center is the only one of the two that is compatible with foreign bank cards. If this machine fails, there are a Bank of China and an ICBC inside the nearby campus of Southwest Jiaotong University. 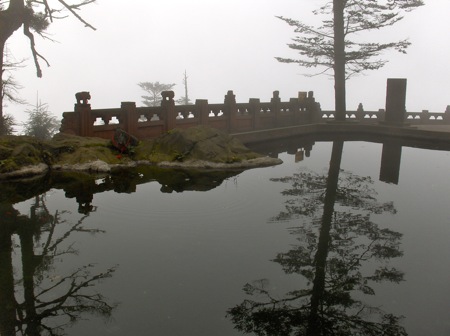 Entry to the Emeishan scenic area costs 150 yuan. The park can be accessed from the base of the mountain near Baoguo Si or by taking buses for 20 to 40 yuan from the Tourist Transportation Center to three stations located at different heights on the mountain.

Nobody seems certain about the length of the hike from Eshan Village to the peaks of Emeishan. One local that we asked said that it was an improbable 60 kilometers. What is certain is that the more southern route past Celestial Peak Monastery (Xianfeng Si, 仙峰寺) is longer, but more picturesque. 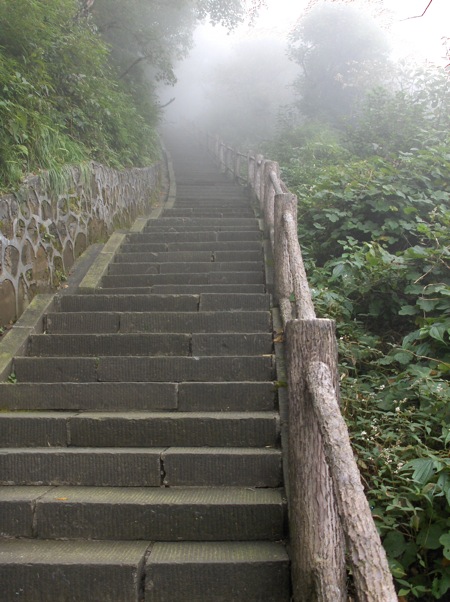 A day spent walking Emeishan's stairs is more punishing than one might expect.

The hike from bottom to top typically takes two or three days. Most monasteries along the way offer bare-bones lodging for about 20 to 30 yuan along with no-frills vegetarian food.

Watch out for the stairs, which can be slippery and somehow seem much more tiring to climb than normal dirt trails. Expect some muscles you didn't know you had to be aching after a day on them.

There is a pricey hotel on the top of the mountain for those who want to catch the famed Emeishan sunrise from one of the three main peaks and don't want to make the pre-dawn hike from a monastery further down the mountain. 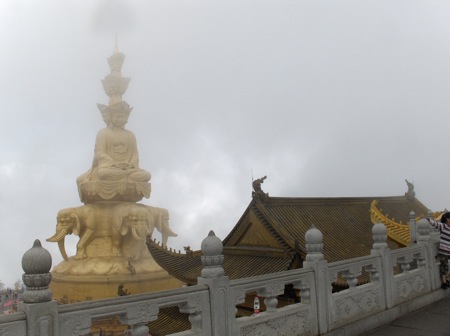 Golden Summit (金顶), one of the more touristy parts of the mountain.

Finally, while we didn't encounter many during our visit, no account of Emeishan is complete without a mention of the Tibetan macaques that inhabit its slopes. While cute and shaggy, they are also known to occasionally become aggressive, attacking visitors and stealing bags and cameras.

Walk briskly and don't let a group of them collect. A big stick isn't a bad idea, either.

Getting there
It's almost 16 hours by train from Kunming to Emeishan. Hop on any Chengdu-bound train, such as the K146 departing at 8:21pm and stopping at the Emei station at 11:56am the next morning.

The trip from Chengdu to Emei is a little over two hours by train or bus from the Xinnanmen bus station (成都旅游汽车客运中心) on Linjiang Lu. It is only about 30 minutes by bus from Leshan, home of the famous Leshan Giant Buddha. 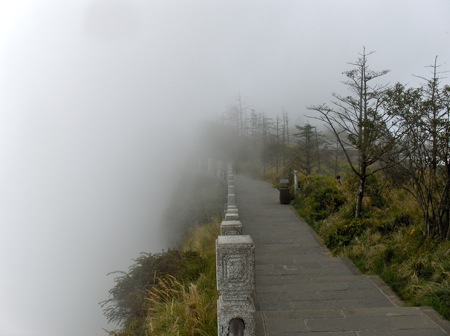 E'mei shan is indeed beautiful, but the macaques are more than mischievous. We, a group of 3, were walking up E'mei Shan when we were approached by a group of monkeys, away from those in the controlled monkey area. I was badly bitten on both legs, with deep gashes on my calves, and pulled to the ground by the monkeys. Some of the monkeys were about as heavy as me. At one stage there were 6 monkeys on me, or threatening me. The monkeys left after ripping open my bag and taking some things from it. After the attack we made our way to the first aid post near the monkey area. The doctor working there treated my bites, gave me a rabies injection and antibiotics. He said that people are bitten on the mountain every day. We had been careful to follow all the instructions given about the monkeys. These monkeys need to be approached with a great deal of caution.

I like the "Getting Away" section of GoKunming, but I'd much prefer to read about lesser known Yunnan places a long-distance bus journey away than large cities which I'd need to fly to. Most of us have job/study commitments, you know!

still there are holidays coming up from time to time.
went to emeishan one day after national holidays-because we didnt have enough time to do the whole hike up (or were we just to lazy?;-)), we took a bus to almost till the cablecar, checked in a hotel and went to the peak to see the sunrise the next morning/night.
seems that we ve been very lucky-it was absolutly amazing-probably one of the most amazing things ive seen my whole life!