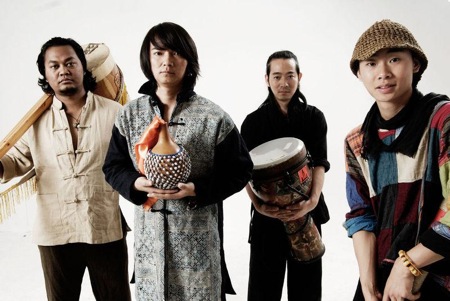 Yunnan's biggest music festival returns next week with a hearty embrace of its indie roots. After a break in 2009, the fourth iteration of the Snow Mountain Music Festival will be held this year from Sunday, October 3 through Tuesday, October 5 at four different venues in Shuhe, a satellite village of Lijiang.

The festival has been held sporadically since 2002 and was once billed by Western media as "China's Woodstock" before taking a decidedly commercial turn in 2008.

But the music this year is weighted toward small acts from around the globe playing country, folk, electronica and experimental music. This is a big change from the 2008 edition of the festival, which was a one-day affair headlined by Canadian pop star Avril Lavigne, whose presence defined the festival and overshadowed smaller acts.

This year's artists are not pop stars like Lavigne, but many have broad fan bases that extend far away from their native lands. Here are some acts that are already generating a buzz: 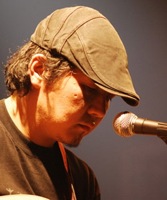 Mamer (马木尔)
Mamer is an ethnic Kazakh who grew up with ten siblings on the grasslands of China's Xinjiang region, where he was exposed to the sounds of Kazakh folk music. His music has been described as "a monumentally satisfying take on the modern grassland sound. Mamer and company haven't just repackaged a folk tradition but recaptured, renewed and reinvented it for a whole new audience."
Mamer plays Tuesday at 7:40pm at the Folk Music stage.

Honig
Dusseldorf-based indie band Honig creates complex melodies from a variety of instruments ranging from brass to piano and synthesizers. The result is a chilled-out sound with pleasant English vocals.
Honig plays Sunday at 8:10pm on the Fusion Stage.

Jack & Ed
Jack & Ed have travelled far and wide and draw on music ranging from Celtic to Arabian to Aboriginal in creating their unique style of world music. Ed plays stringed instruments and Jack sings and plays a range of flutes—including a hand carved bone flute—and sometimes a didgeridoo. They will play at one of the festival's two bar venues, which should provide an intimate setting for their haunting, plaintive music.
Jack & Ed play on Monday at 7pm at the Experimental Stage located at the Shuhe Bar

Shanren (山人)
Shanren translates as "mountain people" and the band's members come from the hilly provinces of Yunnan and Guizhou. Shanren includes members of both the Wa and Buyi ethnic groups and plays an energetic fusion of western and Chinese minority folk music on a range of instruments. The group is well-known throughout China.
Shanren plays Tuesday at 9:10pm on the Fusion Stage

These are only a few of the dozens of acts that will play the festival, which include a large number of Yunnan-based artists such as Kink Gong from Dali and Strange Day and The Quebec Redneck Bluegrass Project from Kunming. There will also be a venue dedicated solely to electronic music with creative DJs like Liman and Sulumi.

In addition, Kunming's own DJ Kris will be providing music between sets on the Fusion Stage.

Finally, Nevada Lundemo will at Mamma Mia, playing nightly country blues solo sets from September 30 through October 5—not an official festival event, but worth checking out. 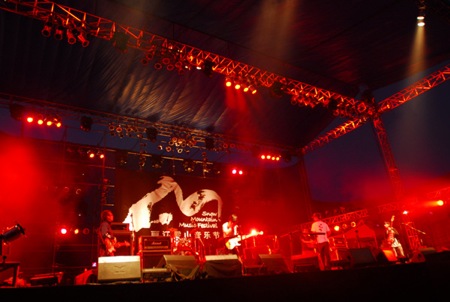 The stage at the 2007 festival

Logistics
As far as we can tell the "Fusion Stage" (融合舞台) will be the largest venue and is located just outside Shuhe, while the "Folk Music Stage" (民谣舞台) is located in a square inside the town. The other two venues are bars in Shuhe.

The festival's full schedule along with other information is available in Chinese from the official website.

A one-day ticket costs 150 yuan and a three-day ticket to the whole festival is 300 yuan. There are also two ticket packages: option A which includes a three-day festival ticket, a one-way train ticket from Kunming to Lijiang and festival t-shirt for 430 yuan, and option B which has a round-trip ticket instead of a one-way ticket for 480 yuan.

Tickets can be purchased online or at several locations in Kunming including Wheatfield Bookstore, Chapter One, Uprock, Half Angle Bar, Salvador's Coffee House, Halfway House, and Laba.

@dirty dan I guess it's King Kong not Kink gong:)