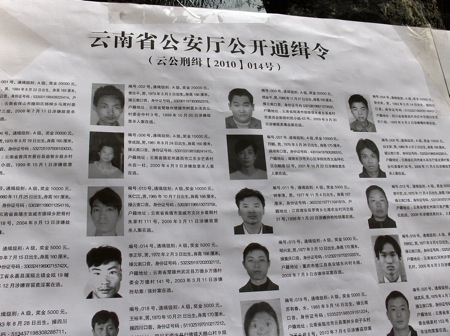 A list of Yunnan's 100 most-wanted criminals has been posted throughout Kunming as part of a campaign to encourage the fugitives to surrender to law enforcement officials.

The list was part of an "urging all criminals to turn themselves in to the police announcement" 《关于敦促一切刑事犯罪人员投案自首的通告》 released by the Yunnan People's Court, the Yunnan prosecutor's office and the Yunnan Public Security Bureau.

What does it take to become one Yunnan's top fugitives? It apparently does not require being from Yunnan, only committing crimes here. Registered residents of Sichuan and Guizhou are well represented on the list along with a smattering of people from elsewhere in China.

Intentional homicide seems to top out the crimes cited on the list with others crimes including drug dealing, armed robbery, weapons smuggling, fraud, inciting riots and arson. 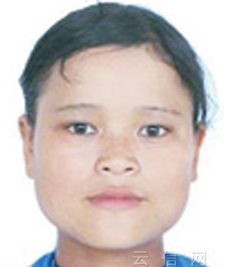 The face of a killer?

The most wanted of the handful of women on the list, Li Pingzhi, comes in at number 12 overall with authorities offering a 5,000 yuan reward for information leading to her capture. She is being sought for her involvement in the trafficking of women and children.

Despite her cherubic appearance, another woman, Cao Enrong (pictured right), age 26, of Wenshan in southeast Yunnan, is wanted on homicide charges. She is number 21 on the list.

June 18, 2021 "We are looking for the full-time computer English teachers with the education background of Computer Science teaching at top unive …"
Jobs Offered estellazhai

June 18, 2021 "Hey, you guys, I am Lily, in the past,I was a teacher with teaching experience of over 10 years,now I want to learn some Japanese and improve my Engl …"
Man Seeking Woman Nicechineseguy

June 16, 2021 "I'm a nice Asian gentleman who's working and living in Kunming city,I'm well-educated,tall and handsome. I'm fit and I'm athletically built as I do s …"
Living in Kunming JanJal