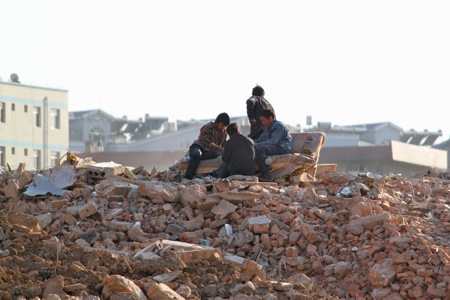 "Some of our demolition and relocation work fails to live up to the needs of ordinary people."

This remark by Kunming mayor Zhang Zulin (张祖林) at a press conference last Friday was hardly shocking to anyone familiar with the frenetic pace of demolition and construction across the city, but it is noteworthy as a rare admission from a top municipal official that some people have been getting a raw deal while others profit.

Zhang's remark came during a conference about a project to redevelop large areas around Caohai, the northern tip of Dianchi Lake which is partially separated from the main body of the lake by a causeway. The project notably once included Shanghai-based Shui On Land - developers of Shanghai's Xintiandi entertainment complex – which indefinitely postponed US$11 billion in projects in Yunnan in 2009 due to financial concerns.

Zhang also said that grassroots government bodies and other organizations need to work meticulously on redevelopment projects, especially the difficult and sensitive task of relocating people.

The mayor said it was important to make sure people have access to modern housing and that those who will come back to live in the same area can do so as soon as possible.

Deputy mayor Chen Yong (陈勇), speaking at the same conference, also stressed the importance of not allowing developers to skimp on construction quality in order to line their own wallets.

The Caohai redevelopment project covers 468 hectares around the northern end of Dianchi and will involve demolishing 4.5 million square meters of floor space and relocating a total of around 100,000 people.

City leaders have expressed high hopes for Caohai - Zhang said that it will be transformed into a new residential and leisure zone that will match or even surpass that surrounding Hangzhou's famous West Lake.

Off the beaten rack: Finding real souvenirs in Laos