Editor's note: Chris Taylor contributed to two editions of Lonely Planet's China guide in the 1990s, as well as authoring, co-authoring or contributing to more than 20 other Lonely Planet guides. His first novel, Harvest Season, is forthcoming from Earnshaw Books.

There is perhaps no greater irony of modern travel than being photographed by the natives with digital SLRs. Times have changed and now foreigners are part of the colorful backdrop for Chinese on personal journeys of discovery in their homeland. Add another layer of irony: in Yunnan, some of those Chinese travelers are now armed with a Chinese-language Lonely Planet guidebook to the province. 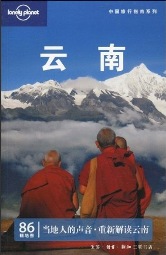 Lonely Planet brought individual travel into the mainstream with the release of its pioneering Across Asia on the Cheap in 1972 – followed by an empire-building slew of guides, including China in late 1984, shortly after the country flung open its doors to individual travel. The travel revolution made Lonely Planet the world's biggest independent publisher – before the sale of a 75 percent stake to the BBC in late 2007 – and guided many of us through our first forays into China. By January of this year, 100 million books had rolled off the Melbourne publisher's presses.

Today, amid economic recession, terrorism scares and borders closed by conflict, the revolution, it appears, is shifting to China – and, if you know Chinese and the Lonely Planet formula, you are in disconcertingly familiar territory in the guidebook publisher's first provincial-level release. Yunnan – the first in what is slated to be series of Chinese-language regional guides to China – is less a guidebook with Chinese characteristics than a tried and tested template applied to a nation that for the first time in its history is enjoying the luxury of mass tourism.

You will recognize all the categories – Places to Stay (住宿); Places to Eat (就餐); Getting There & Away (到达和离开) – and appreciate the fact that you get a lot more information in this independently researched book of 468 pages, with 86 maps, than you do in any English-language guides to China and its regions.

In Kunming too, GoKunming readers will be in familiar territory. Salvador's and Prague get the nod for "best coffee shops", Ganesh is praised for its "foreign ambience"; The Hump Bar makes it into the Nightlife section; and GoKunming gets faint endorsement as "not a bad website". But, on the downside, there are no real surprises either – the reader could be forgiven for expecting a guidebook by Chinese researchers to yield some unfamiliar local dining tips that provided a eureka moment of, "What the hell have I been doing sitting on Wenhua Xiang?" That doesn't happen.

This is an even-handed, well-researched guidebook that features attractions – Solitude Hill at Fuxian Lake, recently featured here on GoKunming, is a good example – you will not find in any English-language guidebook. It acknowledges the rampant commercialization of Lijiang, phlegmatically noting that this does nothing to stop endless swarms of tourists (6 million a year, the writers claim), which might explain why the book does such a lackadaisical job with accommodation listings there, failing even to mention the Banyan Tree Resort.

But this appears to be a problem throughout, and it is difficult not to come away from an afternoon with Yunnan without a sense that it suffers from an identity crisis. Just who are China's independent travelers? What do they want? Whoever directed this effort clearly came to the decision that they are not the SLR-toting, SUV-driving elite or the tour-bus hoi polloi most of us encounter at China's heaving tourist attractions these days. For a start – should you be part of the target demographic – you don't have a car or a motorcycle or a bicycle. In this guidebook, you are either on the buses, on the trains or flying.

If this is the case, and the Lonely Planet mission in China is to tap into an emerging local backpacker culture, then you would expect Yunnan to be more accurate on hotel pricing and to feed into the scene where it still lingers or has a chance of flourishing. Case in point: Dali and environs. Almost none of the foreigner/Chinese backpacker touchstones rate a mention there – Bird Bar, Bad Monkey, Tower Cafe, the Vodka Bar, Caffeine Club (admittedly probably closed at the time of research), King's Park Kitchen, Yiheng (commonly regarded as the pick of the Bai-managed restaurants in Dali). Shuanglang – the next Dali and a place where Chinese backpackers actually do go – may as well not exist.

This of course is not a problem if you're already tapped in. But how well does it serve its target audience of native Chinese on a first visit to Yunnan? On this, the Lonely Planet engagement with the Chinese travel revolution will likely either succeed or fail – and it's more than likely that the Chinese travelers will be in a car, QQing, or simply talking to friends.

nice review. does the book spend much time on slightly less-traveled destinations like Xizhou, Shaxi, etc? i wonder how much domestic tourism is geared to a more backpacker-ish or maybe "artistic traveler" demographic and what impact this may have on some places that haven't fully gone the Lijiang route yet... i naively hope a better alternative can be discovered.

by the way, my site recently published a profile of Wheatfield Bookstore, which also gets a mention in the Chinese Yunnan Lonely Planet: pangbianr.com/wheatfield-bookstore-kunming/

In addition to a profile/interview of Ma Li of Wheatfields, the book also interviews Jeff Fuchs, who we interviewed recently: www.gokunming.com/en/blog/item/1732/interview_jeff_fuchs