Kunming preparing for another drought 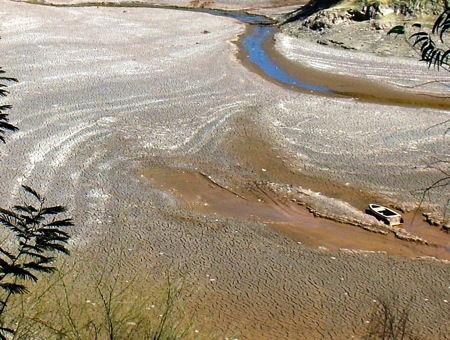 While heavy rains and landslides have been wreaking havoc in other parts of Yunnan, the 2010 rainy season in Kunming has so far underperformed even the lackluster rainy season before last year's severe drought. This time around however, municipal water management officials are showing signs of concern about city tap water supplies during the dry season.

As of Tuesday morning, Kunming had received 40 percent less rain than during the same period last year—which was already insufficient by normal standards. Two years of low rainfall have left some reservoirs in nearby Fumin and Songming counties only 20 percent full in the second half of July, which is usually Yunnan's rainiest month.

In September of 2009, when there had been about 30 percent less rainfall than normal for the year, Wu Defang (武德方), director of Kunming's flood and drought task force, appeared unconcerned regarding the city's water supply stores. Wu said that reservoirs around Kunming had enough water to carry the city through the dry Yunnan winter without any rainfall until the next rainy season started. His office also predicted higher than usual rainfall for the autumn.

As it turned out, there was barely any rain in Yunnan between September of last year and June of this year. That lack of precipitation combined with the meager rainfall in Kunming so far during this year's rainy season have prompted a different response from Wu in 2010.

Yesterday he convened a special conference of water management officials and stated that the goal of the conference was to make sure that Kunming spared no effort in retaining every drop of water possible in its reservoirs.

At the conference, Chu Ruming (储汝明), vice director of the city municipal water service told representatives from each of Kunming's urban districts and outlying rural areas that keeping water flowing to citizens was essential and they could absolutely not lower their guard in performing that task.

Well, if the citizens of Kunming were to suffer limited tap water supply, guess they could all go to Mr. Wu's home and get water from his tap. It appeared there's enough in his reservoir...

See, Luc. that's why it is essential to keep the water flowing in his tap...

Me thinks the city government could/would/should close off some of the heavyweights like 水疗会所 and sleazy 足疗馆, at least till this drought passes. Sure those officials can wash their own feet at home, can't they? Or do they?

i can't believe foreigners in km have noticed sth the officals couldnt' find out. i guess locals are so foolish that foreigners have to stand out to say a thing

^the article is based off a local newspaper story. and it sounds like the officials are the ones who invited the newspaper repoters to their meeting about the water shortage. so it seems completely off base to say that foreigners noticed it and the local officials didn't.

at least they're trying to plan ahead a bit and do what they can.

@Bob: Have you any idea what the plans may be. I hope that it's more than planning to have another meeting. Experts in global warming (and that is the reason) will suggest that immediate, severe, actions must be taken, for example, double the cost of water.

This simply not a 'fluctuation' - it'll be worse next year.

Records show that snow fall in the Himalayas and the Artic (for example) is no longer replenishing glacier melt - this has been the case for more than a decade ... and continues.