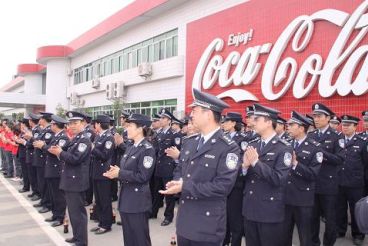 In the United States during the 1980s the marketing battle for cola supremacy between Coca-Cola and Pepsi was waged with celebrity endorsements and blind taste tests. Twenty-five years later, the Coke vs Pepsi 'cola war' has come to western China, with both beverage companies looking to win the hearts and minds of locals via savvy public relations.

Coca-Cola has traditionally had more market penetration than PepsiCo in China's west, but it was difficult not to notice its rival's growing interest in western China in the last couple of years. Coca-Cola currently has 35 bottling plants across China compared to PepsiCo's 22, but PepsiCo has ambitious plans to add 14 new plants in the coming years.

In June 2009, PepsiCo opened its first 'green' bottling plant outside the US in Chongqing and has plans to begin operations at new green plants in Kunming and Lanzhou around the end of this year. The plants meet the rigorous energy- and water-saving requirements of the US Green Building Council's LEED certification standard.

PepsiCo has done well on the PR front in its attempt to catch up to Coca-Cola, garnering positive press from Chinese media including China Daily, which recently gushed about the company's environmental credentials:

Even before calls for energy saving turn a notch louder in China, global food and beverage producer PepsiCo is already leading the way with a green, socially responsible approach in its business operation...

PepsiCo has undoubtedly set an example on how a multinational commits itself to the Chinese market by improving the lives of the local communities.

Coca-Cola raised the stakes earlier this month when it announced that it had 'adopted' twin pandas born in Sichuan shortly after the 2008 Wenchuan earthquake. 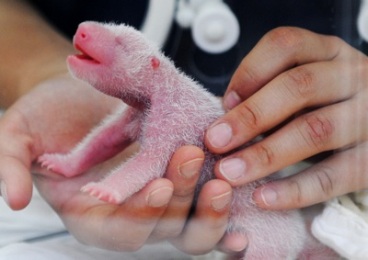 The pandas, originally named Wen Li (photo above) and Ya Li, were renamed Le Le and Mei Mei by Coca-Cola, which has pledged to invest over one million yuan to ensure the twin sisters' food supply and health care at the Chengdu Panda Base. Highly cherished in China, pandas are known as 'guobao' (国宝) or 'national treasure'.

Somewhat surprisingly, Coca-Cola has balanced its Chengdu cute offensive with an alliance with the Kunming police. This month Coca-Cola Yunnan held a "Harmonious Community, Safe Kunming" ceremony with Kunming police at its Kunming bottling plant in which it donated 500 Coke-branded tents and 500 umbrellas to public safety efforts. 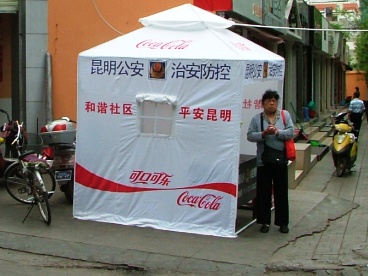 The tents, which feature the Coca-Cola logo and the Kunming police insignia, are already taking up precious walking space on the crowded corners of streets throughout downtown Kunming and are often empty. The tents read in Chinese: "Security, control and protection. Harmonious community, safe Kunming."

Coca-Cola's rationale for partnering with Kunming's police is less clear than its panda sponsorship. Last year, a total of three detainees died under questionable circumstances in police custody in Kunming.

As things stand now, Pepsi has its work cut out for it, it not only has to compete with Coca-Cola's flagship cola, but also the venerable Sprite, which is the best-selling soft drink in China. Coca-Cola also launched a new tea-based soft drink called Spritea in March.

As China's fastest-growing regional market, western China has arguably become the most important battleground in the crucial China market for the two beverage companies in the coming years.

"China is one of the top three priorities for PepsiCo, if not the top priority. There is no question that China is critical for global economic growth," said Ken Newell, president of Pepsico China Beverages.

"We plan to go further into the west and the north, in line with the nation's 'go west' strategy," Newell said.

You can (openly) sponsor the police now?? I'm in. I'll pay my local flatfoot to have "Danmairen = Great guy" written on his riot shield.

and then they fight for supremacy?