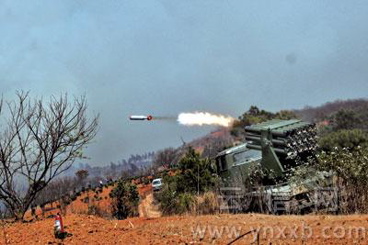 The system consists of a truck-mounted launcher that fires rockets filled with an unspecified fire-extinguishing substance. It is intended to keep firefighters out of harm's way and fight fires on steep hillsides that are difficult to access on foot.

According to the report, firefighters were initially planning on firing rockets at a mountaintop where a forest fire was encroaching on high-voltage power line towers, but were seemingly foiled because they were afraid of destroying the very power lines that they were trying to protect.

Several hours later in another area firefighters succeeded in firing ten rockets at a fire burning near a highway.

As Yunnan continues to suffer from the worst drought on record there have been a large number of forest fires across the province. Kunming alone reported 81 forest fires between November 10 of last year and February 7 of this year.

During the drought, the Yunnan government has been occasionally claiming that snow and rain in the province were artificially triggered, but such claims are difficult to prove because the precipitation may have occurred anyway without human intervention.

CCTV has an interesting video of cloud seeding in action in Qujing. 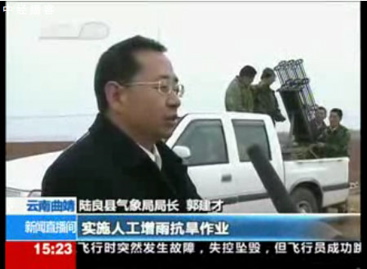 Water shortage continues
Water is selling for 100 yuan a cubic meter, or 10 yuan a liter, in some parts of Yunnan according to an article in Kunming Information Hub.

Fear of water shortages has prompted the Qujing government to shut down businesses such as car washes and saunas that rely on intensive use of water. Additionally, Kunming has raised its fines for businesses discovered to be wasting water.

Cloud seeding is based on shaky science at best and claiming to have done it with (obvious) little result seems more like an attempt to get a couple of cheap points with the public. As to the ingenious Long-range-intelligent-fire-bla-bla-bla I am fairly certain that helicopters can do a much better, faster and safer job spreading fire repressing chemicals.