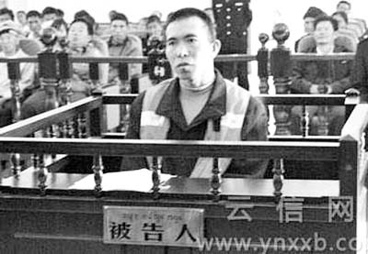 Kang Wannian (pictured above), a villager from Mengla county in Xishuangbanna prefecture was sentenced to 12 years in prison on December 21 and ordered to pay a fine of 480,000 yuan for shooting and eating a rare Indochinese tiger.

In a case that gained international attention, Kang killed the tiger in February of 2009. He claimed that he and a friend had gone to collect freshwater mussels along the Nandun River near the Laos border in the Xishuangbanna National Nature Reserve when he shot the tiger in self-defense using a shotgun he was carrying.

The Xishuangbanna court that heard the case was apparently unconvinced by Kang's claims of self-defense. Hovering above the defendant were questions of why he brought a shotgun to go digging for mussels and why, if it was shot in self-defense, the tiger was shot at a range of 35 meters.

Of Kang's 12-year sentence, two years are for possession of a firearm, which is forbidden for civilians in China. Another firearm—a high powered rifle—was also found during a search of Kang's residence.

After Kang shot the tiger, acquaintances of his arrived at the scene, whereupon the group butchered the animal and divided the meat between them, taking it home to eat. Four other men have also been sentenced to terms of three to four years each for their roles in the butchering and eating of the animal.

The case was particularly high-profile because many believe the tiger that Kang shot was the last Indochinese tiger in China. This belief is based on the fact that the animal has not been seen in China since one was photographed by researchers in the same nature reserve in 2007, and has not been seen since the shooting. Only about 1,000 to 2,000 of the species exist, spread across Southeast Asia.

Officials at the nature reserve have since stated that there is no way to know whether any other of the elusive cats exist in the reserve. Of China's other species of tiger, the Siberian tiger, only a population of 500 exist today in isolated areas of Northeastern China—though scientists believe that population suffers from serious genetic problems due to being brought back from the brink of extinction.

Kang's lawyer was quoted in the Shenghuo Newspaper account of the sentencing as saying that the defendant intended to appeal the ruling.

He should of been sentenced to death.

April 17, 2021 "Working place in Xundian, Kunming. No teaching experience required, just a helperhelper. If you are experienceexperienced you would get higher salary. …"
Jobs Offered KMteaching

April 16, 2021 "I'm a nice Asian gentleman who's working and living in Kunming city,I'm well-educated,tall and handsome. I'm fit and I'm athletically built as I do s …"
Travel Yunnan Ricklane