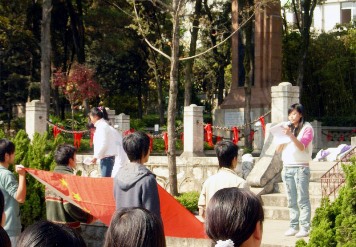 Last Friday, Kunming's grade school students descended on Yunnan Normal University for Kunming's own patriotic holiday, "12-1 Day", the remembrance of a professor and four students shot and killed by Kuomintang forces during on Dec 1 (12-1), 1945.

The YNU campus houses their bodies in a memorial that includes a museum and a garden. The street outside the main gate is named Yieryi Dajie, or 12-1 Street, in their honor.

Each class had prepared a recitation to honor the fallen and lay an offering before their tombs. The children then filed through the museum and wandered the grounds.

"My students come here to remember these heroes and learn our history," said Li Jun, a Chinese teacher at Middle School 30.

Every November teachers devote class time to preparing for the field trip. "It's a very important part of the school year," Li told GoKunming.

Wen Yiduo, 16, arrived early at the memorial. Later in the afternoon she would lead her classmates from Yunnan Broadcast School in a pledge commemorating the martyred communists.

"I'll read it in front of the class, but all of us at the school prepared it together," said Wen. The words had been written in carefully spaced columns along a sheet of red poster board.

A large number of noncombatants in Yunnan were killed while Kuomintang, Communist, and Japanese forces fought for dominance of the mainland more than half a century ago. Yunnan Normal University's campus was then the wartime refuge of three northern Chinese universities, including Beijing University.