Mastodon fossil find may shed light on the evolution of mammals 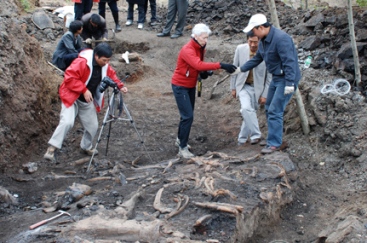 The recent discovery of a giant mastodon fossil site in northeastern Yunnan may provide science with a better understanding of the evolution of modern mammals, and possibly insight into the origin of humans.

A team of more than 10 Chinese and foreign archeologists have been examining the mastodon fossil site in Zhaotong prefecture, which consists of at least three complete skeletons, according to a Dushi Shibao report. One of the fossilized tusks found at the site is 2.6 meters long and weighs more than 150 kilograms.

The fossil was discovered by local farmers who were digging up brown coal. On November 2, local officials have already passed temporary protection measures for the site, located at Tangshuiba (塘水坝), near the village of Taiping (太平).

It is estimated that the mastodon lived between three and seven million years ago. According to Ji Xueping (吉学平) a director of the Yunnan Provincial Historical Relics and Archeology Institute, digging at the site has only just begun and those involved are hoping to find fossilized ape remains. Ape remains from this period would cast light on a crucial and little-understood moment in the evolution of apes.

One University of Pennsylvania professor who has been working at the Zhaotong site told Dushi Shibao that although analysis work was still being done, it was already apparent that the fossil came from the period in history in which large mammals died out and smaller mammals became dominant.

Note: Due to a translation error, this article originally dated the mastodon fossil as being 300 to 700 million years old. Thanks to the readers who pointed out the error.