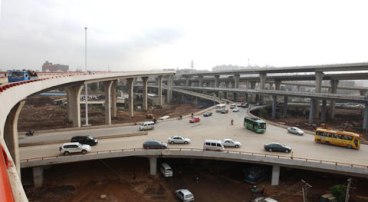 Kunming's Second Ring Road open to traffic
After one year of demolition and reconstruction, Kunming's second ring road (二环) is now open to test traffic and will officially open to the public on Wednesday.

Local media is gushing about the completion of the ring road, which will serve as the linchpin in the city's "four rings, 17 spokes" traffic plan, in which expansion of the city's traffic system from two ring roads centered around Green Lake Park to four ring roads – the fourth encircling Dianchi Lake – will shift the center of the city's traffic structure southward, coinciding with the development of "New Kunming" in Chenggong.

According to government traffic officials, once on the second ring road, it will be possible for cars to reach destinations including Chenggong, Anning, Jinning, Kunyang, Haikou, and Songming. Travel time from to Yiliang, Luquan, Shilin and Xundian will be reduced to one hour.

The Dali-Lijiang passenger line will operate daily, with hard seats on the L9016/7 (Dali to Lijiang) and the L9018/5 (Lijiang to Dali) costing 34 yuan. Total time for the journey is approximately three hours and 45 minutes.

Southwest China's first IMAX theater to open in Kunming
At the end of this month Kunming will become the first city in Southwest China with an IMAX Theater, according to government-run BBS clzg.cn.

The theater, which features a 12 meters high by 21 meters wide screen, is located in the new Shuncheng Shopping Center on Dongfeng Xi Lu. The shopping center, which will also be home to retail outlets including Zara and Papa John's, is built on the old Shuncheng Muslim quarter, which prior to its demolition in 2004 was a dilapidated but vibrant neighborhood filled with Hui and Uighur restaurants.

thanks to my google news alert i know when this was publish and so i know what date the "tomorrow" you refer to is. could be cool to have a date on your stories though. or is there one and i missed it?

that open bit of road in the photo looks far from safe... i may be seeing things (cough, cough), but are there people walking on the road? wacky.

We put the date below the headline... the day it goes up it says "today", the next day it says "yesterday", after two days the date is displayed.

I assume this test only involved a very limited amount of traffic since the North-South traffic in Kunming today was worse than imaginable. Cool that the IMAX is ready to go. They are awesome.