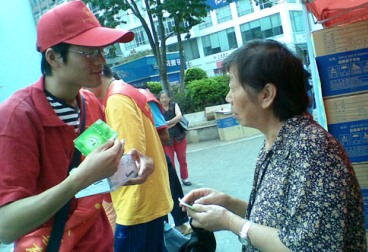 Yesterday Kunming's municipal government began an ambitious new campaign to remove the ubiquitous gobs of spit that cover the city.

Rather than introducing fines like Hong Kong or pushing public campaigns against spitting as has been done in Shanghai, the clumsily named Kunming Municipal National Hygiene City Establishment Task Force (昆明市创建国家卫生城市指挥部) has chosen to distribute millions of small green bags that would-be street hockers can fill with their phlegm.

Each day, the municipal government will distribute 116,000 of the free antibacterial bags, which it refers to as "environmentally friendly phlegm bags" (环保口痰袋) as well as "dragon saliva bags" (龙涎袋). 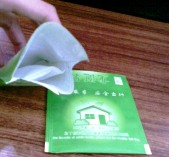 Distribution of the bags will take place in streets (16,000 per day) and at bus stops (10,000 per day) in downtown Kunming. Beijing Lu and Dongfeng Lu will be the initial focal areas for the program.

Getting rid of the bad habit of public spitting is actually not difficult: a tiny piece of tissue, an environmentally friendly phlegm bag, this can make us have a healthy way of behaving and an atmosphere of civilized living. Actually, the bitter lesson of SARS has already told us, each and every one of us can become the bodyguard of the dignity of human lives, all that is needed is for us to spread the word and come together and we will definitely be able to eliminate bad habits!

In a city where spitting wherever one wants is a deeply ingrained habit for a substantial portion of residents, getting people to stop spitting in public is a rather lofty goal, reminiscent of the city's failed attempt to ban car horns at the beginning of 2008.

HAHAHAHA this has made my day

can't wait to fill my first bag with lung butter!

all i can say is, that another company (the one producing the bags) has found a way to make money. that's all.

well besides the trash that this will produce, 100'000 bags laying across the ground in Kunming city.