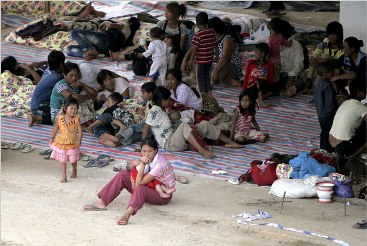 A nearly monthlong conflict between Myanmar's army and ethnic fighters has led to what may be more than 20,000 refugees in an information dead zone, with foreign journalists being ordered out of the area, according to a New York Times article.

The United Nations High Commissioner for Refugees (UNHCR) estimates that as many as 30,000 refugees have crossed the border into China since fighting between the Myanmar army and an alliance of four area ethnic groups known as the Myanmar Peace and Democracy Front (MPDF) broke out on August 8 in the Kokang region of northeastern Myanmar's Shan State.

China's Foreign Ministry said it was providing humanitarian assistance to the refugees, many of whom are Chinese businesspeople. At present, China's plans for dealing with the remaining refugees have yet to be made public. The government is also declining to comment on the current state of affairs in the several refugee camps in the towns of Nansan and Genma, located in Yunnan's Lincang prefecture.

China is one of the few Asian countries to have signed the 1951 Refugee Convention, which codified non-refoulement, or the principle of refusing to send refugees to places where they are likely to be under threat again.

It is estimated that approximately 4,000 refugees have returned to Myanmar since fighting ceased two days ago.

Media in Thailand are reporting that Myanmar's ruling junta has sent troop reinforcements into Shan State for the purpose of consolidating control over the region – a move that could provoke more violence between Myanmar soldiers and ethnic militias and worsen the refugee situation.