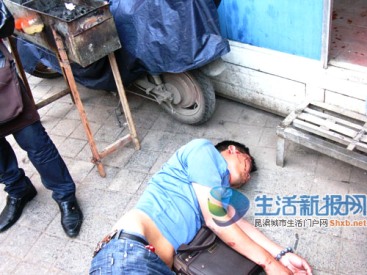 Early in the evening this past Sunday, shoppers passing near the Xinhua Bookstore on Nanping Jie may have noticed a bloodied young man laying on the ground between roughly 5:30 and 8:00 pm.

Who beat up this man and left him injured on the street? According to witnesses interviewed by local paper Shenghuo Xinbao (aka Life Times), the man had been beaten by plainclothes chengguan (城管) – literally 'city management' – the government employees who are charged with keeping the streets free of unlicensed commerce.

The man, Yuan Bangjin (袁帮金, pictured above), moved to Kunming from Sichuan in January of this year after a tragic 2008 in which the May 12 Wenchuan earthquake killed his wife and destroyed his shop. According to the Shenghuo Xinbao article, Yuan barely had more than a photo of his deceased wife when he arrived in Kunming.

According to Tong Dahong (童大洪), a friend of Yuan's, the two men had been playing cards with others before returning to Nanping Jie, where Tong was flogging goods at a makeshift street stall. When the chengguan arrived, Tong fled, leaving Yuan to face the chengguan alone.

The chengguan reportedly mistook Yuan for an illegal street vendor, leading to a quarrel that quickly turned violent, according to onlookers quoted in the Shenghuo Xinbao report.

"We change shifts at three, afterward I was sitting in our [chengguan] kiosk the whole time, we did not beat anyone – furthermore we didn't wear plainclothes today," Chengguan captain Yu Bing (余兵) told Shenghuo Xinbao.

"If you're going to say we're beating people, you need photographic evidence," Yu added. "At present we've undergone an investigation and we have no responsibility whatsoever.

A woman working near the Xinhua Bookstore on Nanping Jie told Shenghuo Xinbao a very different story. The woman, who did not give her name, said she and her coworker both saw plainclothes chengguan beat Yuan.

"[Chengguan] come here everyday, frequently in plainclothes," she said. "I know exactly what they look like."

"How can I obtain photographic evidence [of my beating] while I'm being beaten?" Yuan asked Shenghuo Xinbao.

Kunming's chengguan have a local reputation for frequently resorting to heavy handed tactics when dealing with street vendors and even registered businesses. Conflicts involving chengguan can also end up with chengguan suffering casualties. A chengguan was stabbed to death on Wenlin Jie in late 2005 while confiscating a tangerine vendor's cart. 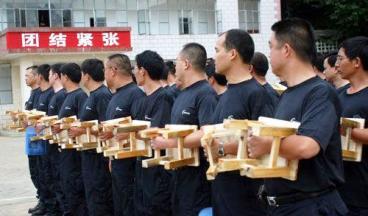 In what may be an effort to improve the image of chengguan in Kunming, a "military-style" seven-day training program for thousands of chengguan around Kunming was launched on Sunday, according to a Yunnan Information News report.

Yang Zhaolin, an assistant chengguan captain, told the paper he was optimistic about the effect the training would have on Kunming's chengguan.

"I believe that later on, the team members who complete this training will definitely not enforce the law the way they wish to or enforce the law haphazardly, putting an end to any unhappiness that results from the process of law enforcement," Yang said.

poor guy.
I've seen chengguan do all sorts of stuff. Just recently I saw them aggressively smashing up the tables outside someone's restaurant.
They are despised by the real police too I hear.
In my opinion they are nothing but a uniformed protection racket.

this country has issues.

I was just wondering, do the police have image problems? And the wujing?

What I really think china needs are some tighter media controls. Maybe make some guidelines on what stories can be reported by the papers/tv. Make sure the image of China stays pure and isnt tarnished by any cowboy journalists who publish stories based on hearsay (like the one above). Punish journalists who dont conform by arrested them for harming national security, or some other similar charge.

Furthermore, stop people conducting civilian/media investigations into matters. If you are properly trained into howto conduct an investigation how can you trust the results? Would you let an untrained doctor examine and diagnose you? Best solution is to create a team of goverment trained and managed investigators who can be hired by the various media organisations to properly and thouroughly investigage matters. That way we can be sure of an accurate and unbiased outcome provided by trained professionals.

And dont even get me started on how they need to beef up their internet controls.....

If a tree falls in a forest and no one is around to hear it, does it make a sound?

If a man is beaten and no one is around to provide photographic evidence, does it matter?

Is it necessary to have photographic evidence?

There are witnesses and that's a very important key point to even begin an investigation. A man's right has been taken away from. In addition, he has had a very painful past.

Anyways, China needs to hurry up and unblock all the website's. Piss me off.

On a related note, i'd like to know what can happen to me if i take photos of "incidents" and if there are any offical rules about it. Once, i was watching a white person being asked questions by the police, not violant or anything, and i was texting. I wasnt taking photo's, but they must have thought i was, and they got very very cross. looked at my phone and told me to leave.

The UK has too many CCTV cameras, but atleast they can provide evidence....

Don't be a little twinkie when your faced with government employees who's going to harass you.

Tell them you'll call the police. Tell them you have evidence of a case and they don't have the right to touch you or you can sue them for harassment.
If your the type of person who knows you'll get into trouble, get yourself a lawyer.
Lawyer's for foreigner's are much cheaper than in the US or in EU.

There is no rule of law of China. One can have as many laws on the books as they wish, but if they are not applied and enforced uniformly, if they are not acknowledged by the people whose actions they are meant to regulate, they are simply words on a page. Gleaming new buildings, factories pumping out record numbers of goods don't mean anything if people cannot be expected to behave in a civilized manner. The chenguan are nothing more than thugs!

Although the way the chengguan are going about their business can sometimes be questionable they actually have important work to do. Who are we to say that there should be no regulations for streetvendors and snacksellers and no reinforcement of the law? There are hundreds -if not thousands- of streets in Kunming designated for late night street food but one of the problems is that the popular streets get filled up completely and no cars (and hence no emergency vehicles) can pass. That's not even mentioning the "quality" of the food that the amount of competition just keeps lowering.

We all know that a law not enforced here in China is no law at all so lets get a more qualified and well trained cheng guan to get things rolling.