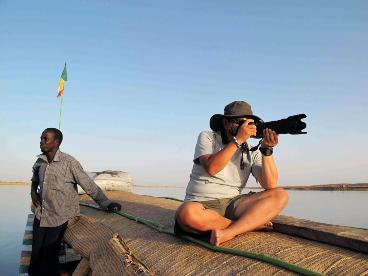 Jin and geologist Fei Xuan spent 80 days crossing the desert by various modes of transportation from Ghana's Atlantic coast to Cairo on the Red Sea in an expedition that aimed to raise China's exploration credentials and study the effects of desertification.

During the course of their travels, Jin and Fei fell out of contact with their Kunming operations base, with Xinhua erroneously reporting that the two had disappeared and may have been abducted by "terrorists".

Visa problems became an issue when the two travelers were briefly arrested in Algeria for overstaying their visas while waiting for Egyptian visas after getting denied Libyan visas. Jin and Fei had to fly from Algiers to Beijing to Cairo, skipping Libya and thus being unable to traverse the Sahara without interruption.

The Yunnan Provincial Museum will hold an exhibition of Jin's photos from his Sahara expedition from July 8 through 13. A preview of some of the photos can be found on Jin's English-language blog.

The Kunming railway station has become a major jumpoff point for illegal drugs from Southeast Asia to make their way to other parts of China, so much so that China's Ministry of Railways is calling the station a "drug control frontier" according to a Xinhua report.

In the first five months of this year, police at Kunming's train station confiscated 31 kilograms of illegal drugs connected to 242 criminal cases in which 283 individuals were detained.

Pepsi to open 'green' plant in Kunming
PepsiCo Inc announced last Friday that it will build a 'green' bottling plant in Kunming and four other cities in China in the coming two years, according to a Reuters report.

The announcement comes after the world's second-largest soft drink producer announced the opening of a new facility in Chongqing that satisfies the US Green Building Council's Leadership in Energy and Environmental Design (LEED) standards, which employ water- and energy-saving systems.

In addition to a plant in Kunming – where rival Coca-Cola Co already has a bottling facility – PepsiCo said it will open plants in the cities of Zhengzhou, Quanzhou, Lanzhou and Nanchang.