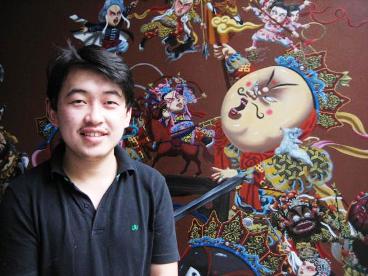 The global financial downturn has deflated the once robust but highly speculative art market in Beijing, but that means little to Kunming painter Du Xi (杜溪), who recently sold all of the 30+ paintings featured at a solo exhibition highlighting his works in Taipei. Du's paintings tell stories from Chinese culture, generally from the perspective of a table top. Characters in his paintings are painted with a high degree of technical skill and attention to detail, but with a light cartoonish element somewhere between manga and South Park.

GoKunming sat down with the 29-year-old Du at his Kunming studio to learn more about his work, the state of the art market in China and beyond, and his plans for the future:

GoKunming: It's no secret that the art market has bottomed out in Beijing in recent months, you're currently a featured artist at William Art Space in Taipei – how do art buyers in Taiwan differ from the mainland?

Du Xi: Taiwan's art market has not really been influenced by the financial downturn because over there, art purchases are not based upon investment potential but rather the quality of the piece itself. People buying art there just want to have something nice to hang on their walls.

Also, China-Taiwan relations have improved, which makes it easier for me to go there and do things.

GK: What has been the biggest development for you as an artist in the last year?

Du Xi: About a year ago I was mostly spending time around Kunming-based painters, now I've been meeting a lot of international painters and seeing their works.

I'm getting new ideas by seeing works from modern painters from Japan, South Korea, Singapore, Indonesia and other countries. My paintings are now absorbing more of a pan-Asian influence rather than just a Chinese influence.

GK: What does this pan-Asian influence mean for your paintings?

Du Xi: I had previously been painting within the context of China and its culture. By getting outside of that context, I've been able to expand into focusing on what I like as an individual, which goes beyond being a Chinese painter.

GK: What are your views of the effect of investment-minded buyers on China's art market?

Du Xi: Well, they have their pros and cons. It's good that people are buying art – this makes life a little more comfortable for artists and it makes it easier for potentially talented artists to choose art as a living rather than ignoring what they want to do for an office job.

The drawback of speculative investors in China's art market has also had a negative effect. Back in the day, artists tended to be discovered long after they had died and were based on the merit of their works. Today with speculative investment floating around the market, a good artist can become famous quickly and then suddenly disappear. Ability is not the most important thing anymore, now it's all about sales.

GK: What trends have you noticed in terms of the broader Asian art market recently?

Du Xi: I've discovered recently that the works I like from outside of China – regardless of if they are Japanese, Korean or Southeast Asian – tend to have a strong ethnic feel.

It seems that lately the more "ethnic" a painter's works are, the more international interest they tend to generate.

GK: What differences do you see between the previous generation of Chinese painters, your generation and the up-and-coming generation?

Du Xi: The previous generation was more focused on technical skills than we are – my generation is more about creativity. I think technology and media will have a profound effect on the next generation of Chinese painters.

It was easier for painters in the previous generation to become famous, in my generation you need to find a niche for yourself to become known.

There are painters in my generation already considered "masters" – I don't think a painter can be considered a master until they've already passed away and the body of their work can be fully assessed with some kind of time perspective.

GK: What is it like for you when you are inspired and making fast progress on a painting?

Du Xi: Getting a new idea for a painting is like playing a new video game – if I'm feeling it, I'll paint or play a video game all night. The crucial thing for me when I'm painting is that I enjoy it.

Du Xi: During the remainder of this year, I'll be involved in exhibitions in Taipei, Shanghai, Beijing and Indonesia. This will keep me busy into early 2010.