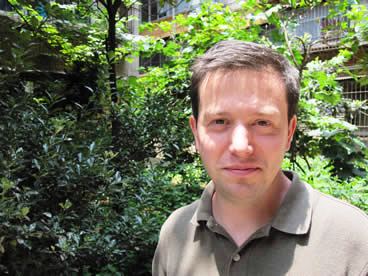 Dr Jakob Klein is a lecturer in social anthropology at the School of Oriental and African Studies in London who has spent years studying food production in China, most recently investigating the production of organic foods in Yunnan for consumption elsewhere.

Recently back in Kunming researching Yunnan food culture, Klein spoke with GoKunming about the state of Yunnan's organic food industry and where it's headed:

GoKunming: What initially piqued your interest in the organic food market in Kunming?

Dr Jakob Klein: When planning research in 2005 on emerging organic food networks in China, Kunming stood out as an ideal place for several reasons. The province is promoted as a centre of biodiversity, and the city itself has an active and internationally well-connected environmentalist scene. Some of these groups have been actively furthering organic food consumption in Kunming and I was curious to learn more about them.

Furthermore, unlike Beijing and Shanghai, where markets in organics and other ecologically certified foods have been around for some time, in Kunming they have emerged more recently, giving me the opportunity to follow developments almost from the beginning. I was also excited by the recent development of Yunnan's export-led horticulture – the products being sold mostly to China's Eastern seaboard and increasingly to Southeast Asia – and was keen to learn about the possible role of organics in this, and whether this might have an impact on local consumption and debates.

GK: What are the main organic products produced in Yunnan?

JK: Tea is by far the most significant, whether in terms of acreage, market value or number of certified producers. Other important products include fresh green vegetables and green beans, root vegetables, rice, fruit juices, walnuts and honey. There is now also one certified organic pork producer in the province.

GK: During your research in Kunming, what did you find the prevalent concept of organic food among local residents to be?

JK: The term 'organic food' (有机食品) is not widely used beyond the industry and the small number of committed consumers. Many Kunmingers have not heard the term at all, and others find it awkward – it carries none of the positive connotations of the English term, if anything it is associated with organic chemistry. However, other terms such as 'green food' (绿色食品), 'ecological food' (生态食品) and 'no public harm food' (无公害食品) have become part of Kunmingers' vocabulary.

Indeed, it is not uncommon now to find food vendors, especially those who claim to have grown the foods themselves, referring to their (uncertified) vegetables as 'green foods' or 'ecological foods'. Several interviewees tell me that these terms, which many use interchangeably, imply that the foods have been produced without chemical fertilizers or pesticides, and many describe the foods as being 'natural' and 'healthy'.

At the same time, people are often sceptical of the various 'ecologically certified' foods found in supermarkets, and this has partly to do with a widespread distrust of labels and partly with the common perception that supermarket vegetables in general are 'not fresh'.

GK: What does it take to be certified as organic in China?

JK: Quite a lot of money and organizational capacity! This is one of the reasons why none of the certified producers in Yunnan are peasant farmers, but instead agribusinesses that either contract out production to farmers and/or hire workers. Usually it takes about three years to convert to organic production, and once certified, producers are inspected annually. Criteria include, above all, a rejection of the use of agrichemicals and GMOs [genetically modified organisms], but there are also other environmental criteria, for example to do with water quality and geographical distance from 'conventional' producers.

GK: How do Chinese organic standards compare to those in other countries?

JK: China's main domestic certifier, the Organic Food Development Center (OFDC), is accredited by IFOAM, the International Federation of Organic Agriculture Movements, and the standards are comparable to those of other similarly recognized organizations, such as Eco-Cert or the Soil Association.

At the same time, whether we are talking about China, California or Italy it is important to recognize that organic certification schemes, even assuming that rules are consistently adhered to, actually allow for a great variety of 'organic' farming practices with different philosophies and different environmental and social effects.

JK: Green Food and Organic Food are certified by two different organizations affiliated with different government bodies. Green Food allows for the limited use of certain chemical fertilizers, pesticides and other agrichemicals. However, a second tier of Green Food, labelled 'AA', is produced mostly for export markets and is internationally recognized as 'organic'.

JK: There are no reliable data on this. Some organic producers and retailers have described the typical organic consumer as 'well-educated' and earning a high income. My own research with Kunming food shoppers, which is largely qualitative, suggests that regular consumers of organics tend to be found among the 'new rich', and also that some Kunmingers associate such foods with elite consumption habits and practices of social distinction.

According to some retailers, organics are particularly popular among women and among the elderly. Again, this is to some extent supported in my interviews with shoppers, and among these 'segments' organics fit into wider strategies of health – not only for themselves but also for their families. After all, women are often the main food shoppers in Kunming households, and in many multi-generational households elderly members do a lot of the family's shopping and cooking.

JK: Undoubtedly. The melamine scandal is only the most recent in a series of food safety scares, which have been widely reported in the Chinese media since the 1990s. My interviews with Kunmingers suggest that in recent years their main food safety concerns have shifted from risks associated with spoilage and poor hygiene in kitchens or markets – which they describe as more manageable – to worries about 'contamination' (污染) in the production process itself, including adulteration, industrial pollution and – especially – the use or overuse of chemical pesticides, fertilizers and growth hormones.

Those informants who do purchase 'organic' products invariably cite these concerns as a key reason for doing so. For their part, purveyors of organics market their products as 'natural', 'healthy', 'hygienic' foods that can help consumers manage food safety risks, and environmental activists promoting organic food consumption convey similar messages.

JK: Not anytime soon. Even producers that have previously focussed on the Kunming market are increasingly looking to the more lucrative domestic coastal and export markets. Having said that, the two developments are not necessarily mutually exclusive, and some observers argue that China's growing importance as an exporter of organic foods is having a knock-on effect on domestic markets, and the same may happen in Yunnan.

GK: What impact is the consumption of pesticides, herbicides, fertilizers and hormones in non-organic food having on China's health?

JK: This is a complex and hotly debated issue, and not one that I am especially qualified to answer. Let me just say a few things about pesticides. First, although underreported there is growing documentation of the health effects on appliers of pesticides, i.e. farmers. These involve both acute pesticide poisonings, in some cases leading to deaths, and various chronic effects including cancers.

When it comes to consumers the effects of currently used pesticides are less well known, although this obviously does not mean that they do not exist, not least if we consider the frequent reports in China of vegetables being sold with illegal amounts of pesticide residues. Again, there is an issue of acute poisonings often going unreported or undetected, and there is insufficient knowledge about the cumulative effects of low-level exposure through food consumption to a variety of agrichemicals and pollutants.

Getting away: Haobao Organic Farm

For those of us living in Kunming China who would like to buy organic produce, can you supply us with any recommended stores, sites, or contacts. Thanks.

It's time for this to change.