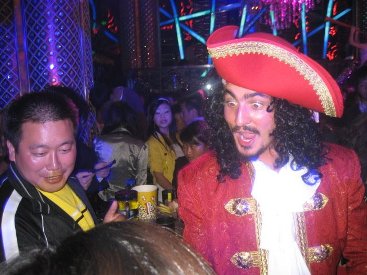 China's growing wealthy class has emerged as an important – and highly competitive - market for alcohol producers from around the world. These companies employ a variety of marketing tactics from 'beer girls' in branded miniskirts to interactive performances. Aspiring American rapper Eli Sweet just completed a stint performing as Captain Morgan in bars, clubs and KTVs around Yunnan, Sichuan and Chongqing. GoKunming chatted with Sweet to find out what it's like at the frontlines of booze marketing in southwest China.

GoKunming: How long did you work as Captain Morgan?
Eli Sweet: About six months in total. The first four were all in Kunming, The last two were split between Chengdu, Chongqing, Kunming, and Xichang. I think the ultimate goal was to move to a national launch, but those plans were put on hold due to economic factors.

We all get on stage, and do a little dance, which is basically a ripoff of the Macarena. After the dance, the Captain gets on the mic and says a few things to hype up the crowd. Then one of the Morganettes takes the mic and explains how the Captain gets down- "he is going to go around to your table - especially if you have purchased a bottle of our Captain Morgans Private Stock - and play a game of rock, paper, scissors with you. If you beat the Captain, he will give you a key to his treasure chests, which you can go and open to receive a SPECIAL prize!"

Inside the chest there are hats and bandannas, eyepatches and fake mustaches. Part of the genius of the event is that by making people work to earn the prize- by beating the captain in rock paper scissors- it makes them appreciate the prize more, even though its ultimately a piece of crap that we are desperate to give them in the first place.

After I have made the rounds in the club for 30 to 45 minutes then I get back up on stage and invite people to come dance with me, or to have a drink. If the stage is big enough, then we pull people up there and do a limbo game, which is fun and can be a bit dangerous.

At one venue there was a stage surrounded by a bar, with a gap in between the stage and the bar for the bartenders to move around in, and when we invited people up to the stage for the limbo game, they would all step over the bar, thinking that they were going to land on the stage, and fall right into the gap, which was about four feet deep from the bar. And it happened with like eight people in a row. Each person gets up on the bar from a speaker, they're smiling at their friends, were yelling at them, watch out watch out, they step forward, then bam! They fall right into the gap, or they slam their shin on the edge of the stage. It was like lemmings.

GK: How are Chinese clubs and bars different from their Western counterparts?
ES: In the US, you can just go in and buy one drink. In Chinese clubs you usually have to buy a whole bottle, or a whole box of beers. That means you usually have to go with a group of friends, whereas in the states it's a lot easier to just go by yourself. Another way they differ is that all Chinese venues have an exclusive distribution contract with one liquor provider, whereas that is not the case in the states. So if you are at a Chivas club in China, you will never see J & B for sale, or vice versa.

The politics of the exclusive distribution rights means that the club owners have a lot of leverage over the foreign liquor companies that are competing for a share of the imported spirit market in China. Foreign spirits only comprise 5% of all spirits consumed in China. Basically Chinese people just drink baijiu. The only place that imported spirits have a significant presence is in the club.

GK: Why do you think drinking games are so popular in Chinese clubs and bars?
ES: Well part of it may be related to China's drinking culture and people feeling obligated to drink with people- especially higher status people- who offer them a drink, but I think mostly people just like to get drunk. Another reason could be that you usually can't hear shit in those clubs, so carrying on a real conversation is out of the question.

GK: What city have you found to be the wildest in terms of nightlife?
ES: Of the ones I've worked in, the nightlife doesn't differ very dramatically.

GK: What's the wackiest thing you saw during your months as the Captain?
ES: I know this might sound strange, but nothing amazing ever happened. It was just a big routine. Dance, drink, plaster a smile on your face, and before I know it I'm back at my house drenched in sweat smelling like club smoke... I mean, things happened. People got drunk and harassed me, tried to pull my wig off. People threw up and burned me with cigarettes and sprayed snow foam in my face on Christmas. They tried to kiss me, and grabbed my junk, and spilled shit on me. But I never saw government officials snorting ketamine with a bunch of hookers in the back of Soho.

GK: What life skills do you feel you have acquired through this gig?
ES: Patience. Rock, paper, scissoring ability. Limbo skills! I am a much better limbo-er than my girth would suggest.

GK: With the recent upsurge of piracy in the Gulf of Aden and Indian Ocean do you think now is the time for pirate hiphop?
ES: Well yes I am a rapper first, and I pirate second, but as far as combining the piracy and hiphop, Captain Dan and the Scurvy Crew have beaten me to it.

GK: What advice would you give kids who want to do your job?
ES: Listen to the This American Life radio show episode called Plan B. It has a story about a person who worked for Cuervo as a "party catalyst," and his story is very similar to mine. And don't be afraid to take trivial things seriously.

When I started the gig I was trained by the international Captain, who is the man at the top of a pyramid of literally hundreds of Captain Morgan actors all over the world, and we were sipping cappuccinos in the lobby of the nicest hotel in Kunming talking about whether or not it would be appropriate for the Captain to say "Arrgh." I presumed it would be too cliché, but he did not rule it out.

Eli Sweet's blog about being a rum-slinging pirate can be found at elisweetisapirate.blogspot.com, samples of his music are available at reverbnation.

Please post a new article soon. Much as I love Eli, that picture is horrific and putting me off looking at GoKunming! Curse of Monkey Island meets Kundu.

The Secret of Monkey Island boy did I play that a lot back in the Amiga days. Jebus I am getting old :(

On an unrelated note I think China should send their warships to deal with Mr. Morgan-Sweet first before they try do deal with Somalian swashbucklers. The experience and training would be invaluable.

June 18, 2021 "We are looking for the full-time computer English teachers with the education background of Computer Science teaching at top unive …"

June 18, 2021 "I own a three-bedroom apartment with two west-style bathrooms, a west-style kitchen and a West-Hill-View balcony. It is nearby Dian Chi and West Hills …"
Jobs Offered estellazhai

June 18, 2021 "Hey, you guys, I am Lily, in the past,I was a teacher with teaching experience of over 10 years,now I want to learn some Japanese and improve my Engl …"
Living in Kunming JanJal