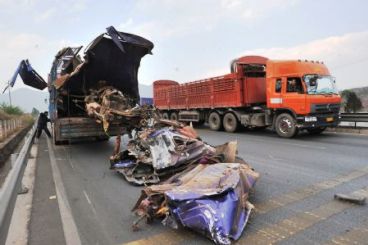 Bus accident leaves 21 dead
The highway between Kunming and Chuxiong was the scene of a fatal collision between a tourist bus and a truck full of watermelons on Saturday. Nineteen people died on Saturday and two more on Sunday, bringing the death toll to 21, according to a Xinhua report.

The watermelon truck reportedly crashed into the back of a tour bus carrying tourists from Beijing, Shanxi and Hunan at 6:40 Saturday morning. Both vehicles lost control and veered off the road. Twenty people were also injured in the accident, all of whom are no longer in critical condition, according to a Yunnan government spokesperson.

In recent years the Yunnan government and China's central government have expressed their desire to have transport links to Chittagong, which lies on the Bay of Bengal. Port access in the Bay of Bengal would reduce Chinese reliance upon the Malacca Strait, which occasionally has piracy problems. The Malacca Strait is also patrolled by the US and its allies, which adds to Beijing's uneasiness.

A rail line connecting Chittagong with Kunming would pass through mountainous northern Myanmar. In his visit to China, Hossain also met with Chinese President Hu Jintao and Prime Minister Wen Jiabao to seek technical and financial assistance for the project.

Kunming Nanchang rail line to launch tomorrow
Yunnan and Jiangxi provinces will finally be connected directly by rail with tomorrow's launch of the 1235/6 train between Kunming and Jiangxi provincial capital Nanchang, according to a Sohu report citing Jiangxi railway officials.

The new line will feature 20 stops between Kunming and Nanchang. In addition to stops in Yunnan and Jiangxi, the line will also pass through cities in Guizhou and Hunan provinces.