On the road: Motorcycling across Yunnan and Sichuan, part 2 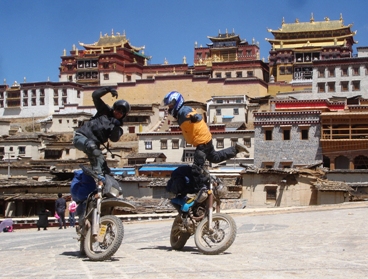 Kunming resident Colin Flahive (pictured above, right) just finished traveling by motorcycle across northwestern Yunnan and southwestern Sichuan with travel companion Josh Pollock, sending dispatches to GoKunming from the road. In today's final post from their trip, Flahive and Pollock fail to reach their intended destination, making an unexpected discovery in the process.

After the long ride from Lijiang, Lugu Lake was the perfect place to rest up and put back a few beers; but the Litang River beckoned, so it was time to get back on the bikes and set off to tackle Sichuan's high-mountain passes.

We started by ascending a long, winding valley to the north, passing through the Mongolian settlement of Wujiao (屋脚), a remnant of the 13th Century Mongol invasion, until we came to the foot of the first of many challenging passes in our quest to Litang (理塘).

The dirt road wound up the mountainside through fragrant pine forests laced with enormous rhododendron flowers—some exceeding the size of soccer balls. Halfway up we stopped for lunch where some Yi shepherds emerged from the forest to check us out. We shared some walnut bread and aged gouda cheese, which they seemed to enjoy. The mountain perch provided stunning views of the surrounding snow-covered, craggy peaks as the four of us munched away happily. 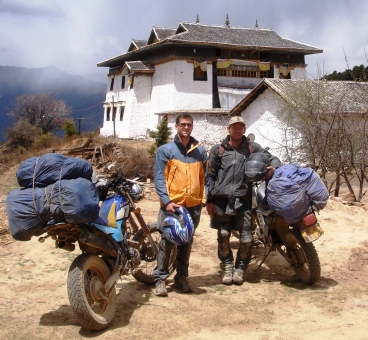 We descended the pass to join the Litang River and stopped over at the Wuerzhen Tibetan Monestary (午尔真大寺)—ancient seat of the Muli Kingdom. Only ten monks currently reside there, and they were kind enough to take a break from routine to show us around and treat us to some fresh yak butter tea (酥油茶).

From there, we broke from the main road to follow a broken and muddy trail down along the river bank. We'd only gone about 30 kilometers when the looming clouds above unleashed their fury. Luckily, we were within reach of a little family shelter whose owners shared their home and hearth while a few centimeters of hail blanketed the valley. As the road was no longer optimal for riding, the family considerately offered us a space on their dirt roof to pitch our tent for the night.

While they cooked us home-grown veggies and dried pork, they told us that they were preparing to vacate their home in three days as demolition crews made their way up the valley to construct a series of 10 hydroelectric dams. He pointed up the steep slope to his other property high above and told us that if we came back in three years, it would be well under water.

It was disappointing for us to think that one of southwest China's last unmolested rivers would be torn up so soon and swiftly, but over a bowl freshly-ground roasted barley flour called tsampa (藏巴) and yak butter tea, the kind man shook off our pity and said that the government had compensated him adequately. Moreover, he said, Sichuan really needs the electricity. With that, he packed us a large bag of tsampa for the trip, accepted no money and sent us on our way.

Our original plans to follow the Litang River for nearly 250 kilometers to the town of Litang were thwarted as the road we assumed existed simply didn't. So after about 45 kilometers, we cut back west and climbed the most difficult pass of the trip. The road was exhausting, stressful, cold, scary, muddy and technical with obstacles around every bend, but I can honestly say it was the most fun I have ever had on a bike. And the day just got better as we entered the town of Donglang (东朗). 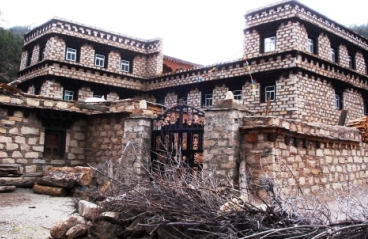 I've traveled to a number of places off the beaten path in China, but none took my breath away like this place did. Donglang is set along a forested valley drained by a striking crystalline river. Scattered along the hillsides are Tibetan homes constructed of carved stone that give the appearance of giant castles more than modest homesteads.

As we cruised through the town of Donglang, stopping from time to time to chat with the locals and to watch a local fisherman net a beautiful river trout, we were forced to push each other onward as the desire to stay longer could have captured us indefinitely. 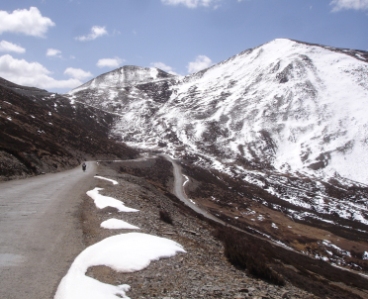 A fierce storm nipped at our heels as we descended another high pass down to Daocheng (稻城) from where we were back on tarmac and able to ride at full-throttle to Xiangcheng (乡城), Deirong (得荣), and on to Benzilan (奔子栏) back along the Jinsha River.

For the last 80 kilometers of our journey, we cruised from Benzilan through the winding Jinsha River Valley down to Zhongdian (中甸), renamed Shangri-La (香格里拉) by the Yunnan State Council in 2001 (see top photo). For us, however, Shangri-La will always be wherever our bikes take us next.

THAT GUY ON THE LEFT NEEDS TO GO DOWN!

incedible! Josh I'm so glad your dad shared with the rest of the family!

Did the police ever stop you for license checks?

I have discovered this page right now... it's a fantastic travel!!

Well, I'll visit Sichuan next August. Please can you tell me how are the roads after earthquake?

Thanks. Greetings from Spain!