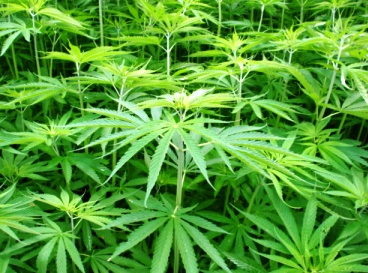 After years of sometimes confused policy in which industrial hemp was lumped together with its psychoactive cousin marijuana, the Chinese government is now actively promoting hemp cultivation as a tool for lifting rural Chinese out of poverty.

China will build multiple hemp cultivation bases in Yunnan, Heilongjiang, Gansu and Anhui provinces as well as the autonomous regions of Xinjiang and Inner Mongolia by 2020, a project that is expected to bring three million people out of poverty, according to a Shanghai Daily report citing an official from the People's Liberation Army's General Logistics Department.

Production at one of the first facilities involved in this plan went online yesterday in Menghai County in Xishuangbanna Dai Autonomous Prefecture in southern Yunnan. The hemp fiber processing factory, owned by China Hemp Industrial Holding Co Ltd, has an annual capacity of 2,000 tonnes.

In addition to being used to produce fibers for rope and clothing, hemp can also be used to make paper which is much less damaging to the environment than paper made from trees. Aside from causing deforestation, tree paper is bleached with toxic chlorine bleach. Hemp paper can be bleached with less environmentally harmful hydrogen peroxide.

The government in Xishuangbanna now provides farmers with free hemp seeds plus technical training. According to the prefecture's party chief Jiang Pusheng, there are nearly 10,000 farmers growing hemp in the area, farmers who through hemp cultivation stand to double their annual income from 2,000 yuan (US$293) to 4,000 yuan.

Yet another reason to move back to Yunnan :)

Hopefully the US can start to follow this example. It would solve a lot of problems in our economy, along with legalization/regulation of marijuana.

about time the same happened here in Australia....its time people got behind the Australian Hemp Industry

Was this development that led to the inability of Bike Mike to export to Australia 2 years ago - seems it's to be some kinda monopoly.

They said, under the regulations then, that such exports of industrial help were illegal because they were narcotics, altho the Australian gov. narc people had tested what was to be exported, Mike had the official test results etc. showing that the Aussies found it was not. His shipment was seized anyway.

where the button to send this to my facebook page??? is it like right there 7 im just not finding?

The US will never go for either legal marijuana or legal hemp. What would all those unemployed drug cops do for a living?

china will go further than other country with this plant.

@lesterness the cops would still have work looking for illegal growers and those growing the drug crop (drugs are their problem). i need to get to someone from Yunnan.