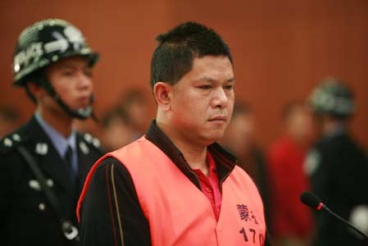 A policeman in southern Yunnan's Mengzi County was sentenced to death yesterday for murdering a person with whom he was arguing about a scratched car in February, according to local media reports.

The Intermediate People's Court of Honghe Hani and Yi Autonomous Prefecture ruled that although Ji Zhongchun (吉忠春) confessed to most of the charges leveled against him and did not flee the scene, he deserved no leniency.

On February 13, Ji, aged 42, was driving his car in reverse while drunk, when he allegedly scratched the car of Pan Jun, 40. Ji and Pan got into an argument over the scratch, during which Pan hit Ji. Ji then shot Pan to death. The incident was reported to local police by witnesses at the scene.

In addition to being sentenced to death, Ji was stripped of his political rights for life and ordered to pay Pan's family 100,000 yuan (roughly US$14,700) in compensation. Ji was also reprimanded for drinking while carrying his weapon and for drunk driving.

The high-profile murder, which took place on February 13, put the spotlight on improper behavior by off-duty police officers in China, where it is not uncommon for police to use their cars to escort friends and relatives or to wear uniforms when off-duty.

Ji disputed the court ruling and said he plans to appeal his sentence.

I love how in addition to giving him the death sentance they also add on the reprimand, just so in the future he will know better :|