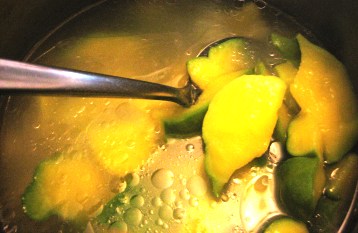 Pumpkin and Potato Soup - nangua yangyu tang (南瓜洋芋汤)
Soup in Yunnan, as in most of China, is a part of almost every meal. It is not eaten as an entrée - it comes along with or after the other dishes. Diners are not provided with a separate bowl to take their soup and sometimes will not even be given a spoon! This necessitates a graceful slurping of one's soup directly from the bowl – fun for those of us who yearn for the simple days when we finished the milk in our breakfast cereal bowl in like fashion.

*Pumpkins in Yunnan are not the big orange fellows that often run by that name in the West but are smaller and more squashlike. If you are in an area where Yunnanese/Chinese pumpkin is unavailable butternut and acorn squashes are acceptable substitutes.

Method
Peel the potatoes and chop them into bite sized chunks. Remove the stem from the pumpkin and chop it into pieces which are slightly larger than the potatoes. The image below shows the potatoes post peel but pre chop. 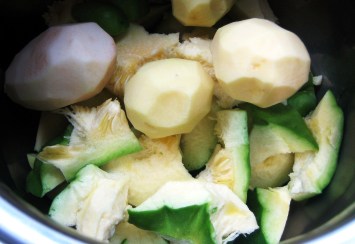 Boil the potatoes and squash in a covered pot containing 1.5-2 litres of water for 30 minutes. Uncover and add the salt and oil. Serve alongside the other dishes with your meal. If you want to get particularly local in your eating habits then ladle some soup into your bowl when it is full of rice – a surprisingly enjoyable eating experience.

Guo's tip – Some meat or vegetable stock can be used to provide more flavour to the soup, this could be from other dishes you are cooking or stock powder. Also rather than adding fresh oil to the soup you can add oil which has been used to cook other dishes and is no longer needed. Be sparing in adding more flavour however as this is not a dish designed to be served on its own. Soup served at the Yunnan table is light and clear in order to complement the strong flavours of the other dishes.

This is wonderful. I love it. Can you come up more stuff like this? Simple, easily-making but tasty.

I love this soup!! I experienced a flashback when I saw it. Can orange pumpkin really be a substitute? I remember the texture being so distinctive. Where can I find one... :(