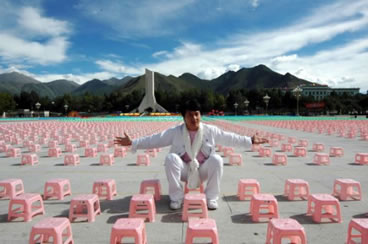 Jackie Chan filming in Yunnan
After the banning of his upcoming gangster thriller "The Shinjuku Incident", Jackie Chan is returning to comedy, filming his upcoming period action comed "Big Soldier" (大兵小将) in Yunnan. The film is set during China's Warring States period and stars Chan as an old soldier who captures an enemy state's young general (Wang Lee-hom, 王力宏), taking him on a long journey to collect the reward.

Filming has been taking place for two months in Yuanmou (元谋), home to the bizarre scenery of the Earth Forest (土林). Chan has described some of the difficulties of filming in Yuanmou on his blog.

Chan has been spending an increasing amount of time in Yunnan recently – in June of last year he signed an agreement to open the first Jackie Chan Peace Garden in Anning.

China, Myanmar sign pipeline agreement
The governments of China and Myanmar have signed an agreement to construct a US$1.5 billion oil pipeline and $1 billion gas pipeline stretching from Myanmar's Arakan coast to Kunming. The pipelines will have dual benefit for China, allowing oil shipments from the Middle East and West Africa to be delivered to the mainland without passing through the strategically precarious Malacca Strait while also facilitating export of Myanmar's own gas reserves.

Construction of the pipelines is expected to begin soon and finish by 2013. In addition to the pipelines, a port for oil tankers and a gas collection terminal will be built on an island near Kyaukphyu. China National Petroleum Corporation (CNPC) will hold 50.9 percent in the project – the remaining stake belonging to Myanmar Oil and Gas Enterprise (MOGE). China will bear all the expenses of the project.

Kunming aims to improve quality of residents in three years
Kunming's municipal Party committee announced that over the next three years, 95 percent of city residents will receive training to make them more civilized, with the goal of Kunming being considered a "national civilized city" by 2011.

According to a committee spokesperson, the multi-pronged project's aim is to make "basic ethical standards for citizens" understood by every household in the city. A special "Urban resident quality education publicity group" has been formed and will work through schools, libraries and websites to reach its intended audience.

A thought occurs to me; Did the article "Kunming aims to improve quality of residents in three years" originate on the 1st April?

Bernie, in agreement, although you know it is serious, it might as well have originated on April 1. I would love to see the details on how they are planning to do this.